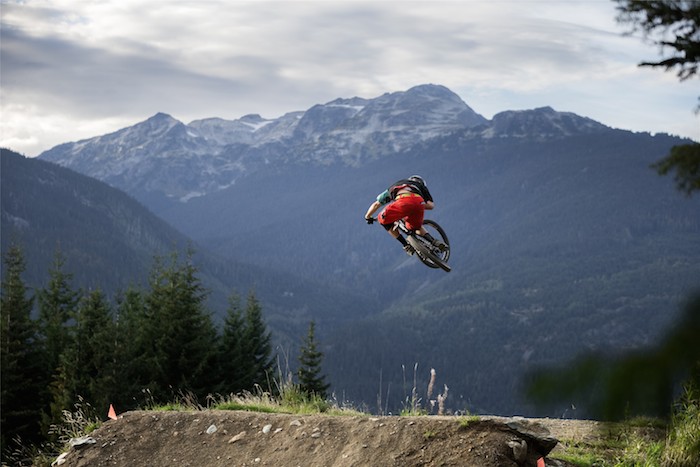 The gondola had scooped us from the base of Whistler and was racing toward the summit when I looked down and saw a half-dozen riders zipping through a forest of cypress and pine. Sun glinting off their helmets, they carved around a wide, banked S-turn and rolled over a granite boulder the size of a school bus. Their riding looked fluid and effortless. And most of the cyclists appeared to be no more than 10 years old.

I expected my descent to be more bedraggled. This was my first time in British Columbia’s Coastal Mountains, and I had little experience on lift-served trails. But after hearing about Whistler’s dozens of runs engineered to maximize fun, I couldn’t resist. Already recognized as one of the world’s top ski resorts, over the last decade the mountain has built a destination bike park that has drawn more than one million cyclists. Following Whistler’s lead, resorts across North America have since installed trails, many of them catering to families and younger riders.

At Whistler, there’s no pause button in sight. Each year, a crew of 20 professional builders sculpts paths and designs stunts that tug on the boundaries of what is possible on a bike. There are jumps and drops for experts, but also smooth, sinuous trails that encourage first-timers to let off the brakes. “We want all of our riders to feel like they’re flying down the mountain,” said Brian Finestone, Whistler’s park manager.

It was precisely that flying part that worried me. I knew that tucked into the creases of the mountain were man-size drop-offs and runs so steep that even grabbing a fistful of rear brake wouldn’t stop you. I am an experienced mountain biker, but if my tires had ever left the ground prior to this trip, it was by accident. Watching those kids fly down the mountain with the ease of sparrows calmed my nerves, but still.

Mark, my hired guide, must have sensed my apprehension. He pulled out a map and unfolded it until the pages spanned the gondola. Beginner and intermediate runs that looked ideal for first-time riders snaked down the mountain, marked with green circles and blue squares, just like on ski runs. I felt mildly embarrassed that my first trip to Whistler would start on such easy trails.

“Oh, that’s the wrong side,” Mark said, flipping over the map to reveal the upper mountain. At that point, we had already sailed past the midmountain station and were speeding toward the craggy summit peaks. Up there, the trails were highlighted in black and had names like No Joke, Original Sin, and In Deep.

“Don’t worry,” he said, in a not-at-all-­successful attempt to ease my anxiety. “If things go bad, Whistler has one of the best trauma centers in Canada.”

The doors of the gondola swung open and a bracing wind whipped across the deck. Our helmets buckled, we started down Freight Train, one of Whistler’s most ­popular advanced runs. I followed close to Mark’s rear wheel. Our tires rumbled over the compacted dirt as the trail rose over heaves in the slope, keeping our speed in check. The first jump appeared quickly—a small tabletop, with a steep takeoff and long landing. Mark popped into the sky, floating over the obstacle.

Still feeling nervous, I tapped my brakes and jumped weakly—speeding across the table’s flat surface rather than sailing above it. On the second and third and fourth jumps, my tires hovered just above the dirt. But as we gained speed, I fell in sync with the trail’s rhythm, relaxing during the calm gaps between jumps, flowing with the ­rolling contours. Then, 50 feet ahead: a copper-colored wedge of earth. I coiled my fingers around my grips. Driving my feet toward the earth, compressing the suspension, I readied as the bike climbed the takeoff. Everything was a thrilling blur of movement: yanking on the bar, uncoiling, exhaling, flying.

That night I treated myself to sushi and washed it down with sake-based margaritas. After dinner I roamed the pedestrian village, which is larger than some of the European ski towns it mimics. There are more than 100 restaurants and bars, dozens of hotels and service centers where visitors can book anything from eco-tours to women-only bike lessons. My attention turned to bicycles, which is easy to do. They were everywhere: Sleek race models cluttered the patio of a slopeside bar; townies sat handlebar to handlebar in the racks next to a coffee shop; kids’ bikes were piled in front of Zogs, which serves ­poutine well past midnight.

It felt almost too blissful. The decadent dinners, posh hotel rooms, and never-­ending feast of trails felt a little like cheating. Isn’t climbing, and its companion suffering, integral to the experience? While ascending on a high-speed quad the following day, I toyed with the math; how long, I wondered, would it take to climb to the resort’s summit, 4,892 vertical feet above the village? I may never know—the lift reached the off-load station before I could finish my calculations and soon I was heading down Crank It Up, an intermediate trail that spiraled down the mountain. As a cyclist I never want to completely abandon the bittersweet torment of a hard ascent. But after a weekend in Whistler, I discovered that I’m not opposed to taking an occasional vacation from suffering. By the time I banked into the first steep corner, any notion of climbing had completely left my mind—I was too busy flying.