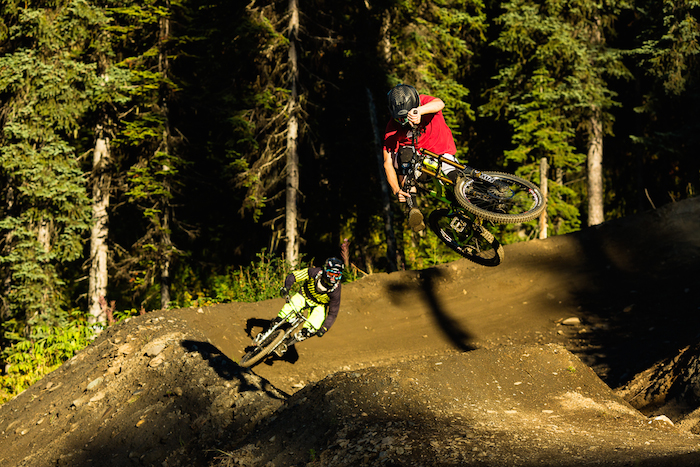 British Columbia's fertile Okanagan Valley stretches between the Coastal and Rocky Mountains and is often called the Napa of the North because of the huge number of vineyards in the region. That same nutrient-rich soil is ideal for sculpting mountain bike trails, a fact not lost on the team at Silver Star.

Dropping in to the mountain’s exquisitely built Pipe Dream is akin to strapping yourself into a Porsche and racing around Nuremburg: The rapid drops in elevation propel you forward and the tight berms whip you from corner to corner. Try to catch your breath between turns, though: The run has 68 berms packed into an 1,800-vertical-foot descent, not to mention the 53 jumps.

Silver Star features 17 other top-to-­bottom trails, more than half of which are designed for beginner and intermediate riders. The hard-packed dirt is fast and as smooth as marble. Groomed trails like these are “why people pay to ride lifts,” says Ian Galbraith, Silver Star’s summer business manager.

It helps that the resort sees less traffic than some larger bike parks. The nearest city, Vernon, is 12 miles down the mountain. Vancouver and Calgary are several hours away by car. The lack of crowds—and pristine trails—has helped Silver Star cultivate a loyal base of locals. That low-key vibe extends beyond the trails. The most popular restaurant is a beer-and-burger joint aptly named the Saloon, and among the lodging options is a hostel with $30-a-night rooms. Riders who truly want to go native can stay in a campground just 40 yards from the trails. “Everyone is here just to relax and have a good time,” says Galbraith.

Share
Related Categories
Related Articles
What to do if you come across an injured rider
Hopkins in Europe pt.2
Rear Derailleur Adjustment
Dog + Bike = Stoke!
Guide to Frame Materials
Wrapper's Delight
Climb It All
Huffman Ascends to Alberta Crown
Train for a Century in 8 Weeks
Airborne Counter-Directional Steering