I've come to talk with you again.

No one can hear me because no one is there. It's just me and the black tunnel at the end of my beam of light. And that's often exactly how I want it to be.

I can't remember the exact point my fondness for riding my bike at night became such a big deal to me, but somewhere between now and I'd guess five years ago, I fell in love all over again. I fell in love with darkness and solitude. I fell in love with something that was so different than anything else I'd ever done. It put me straight into the bullseye of a fear I didn't know I had: being alone in the woods at night. 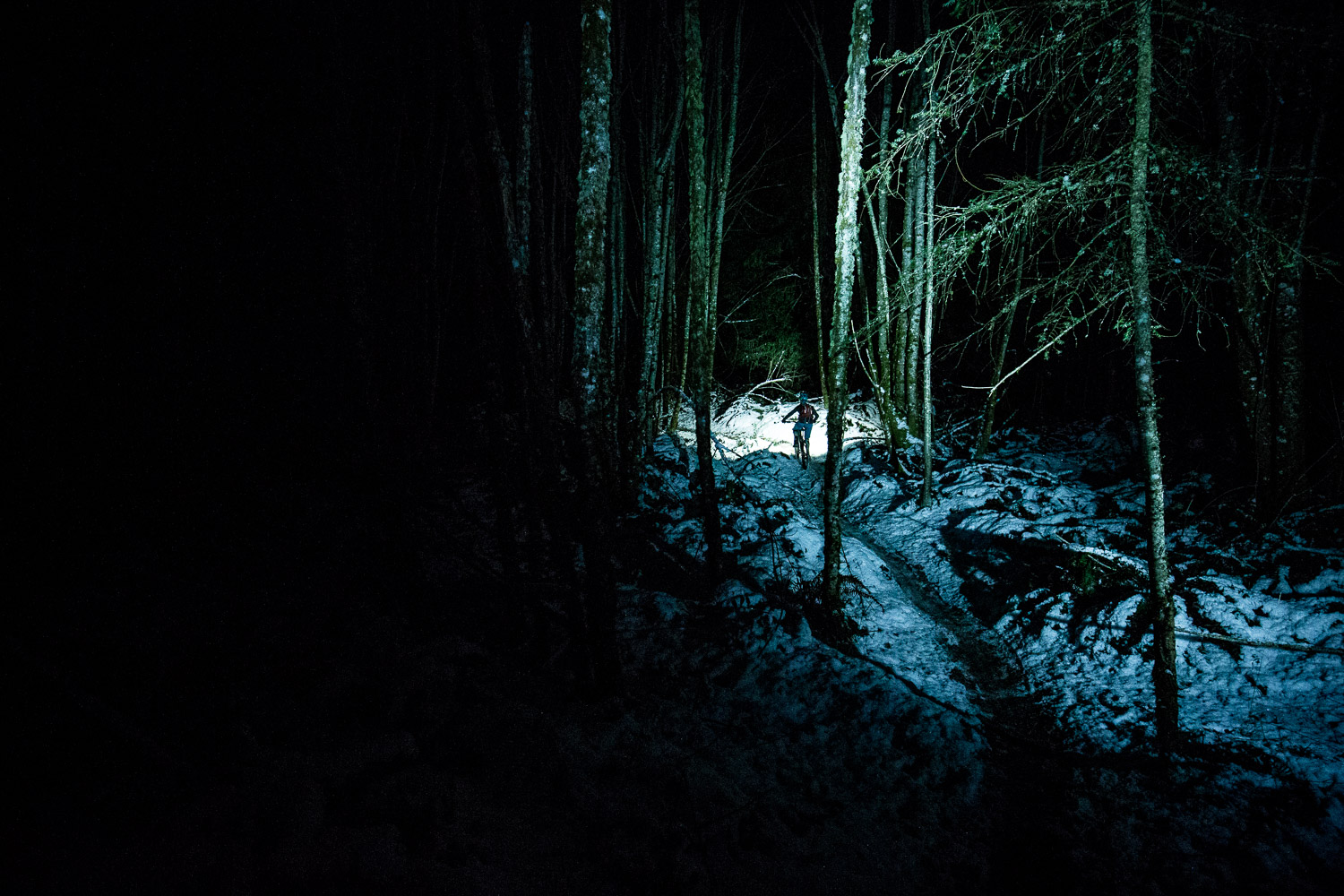 There are things out there, you see. Creatures, of course, but even more so, my imagination. The drops of dew reflecting against my light catch the corner of my eye as I pedal and for an instant I wonder if it was dew or perhaps a pair of eyes. Trails that feel so ordinary during the daytime come alive at night. It's as if someone hit the "tilt" button and all of a sudden the trail steepness sharpens a few degrees. There are roots that I'd never noticed before. Pointy rocks that surely spiked out of the ground once the sun set. And shadows. So many shadows. Shadows that move with me, dance with me, and chase me down the trail like the monsters from Where the Wild Things Are. They gnash their teeth and stare me down with their yellow eyes.

And I love it. I love every second of this terrifying freedom that straddles the line between stupid and euphoric.

Recently I was riding with a friend who may love night riding as much as I do and he said to me, "Do you ever notice that the woods smell different at night?" I hadn't before that question was posed, but as we rode along he'd stop and say, "There. Smell that? That scent? It's crazy. I've never noticed that during the day, but I smell it at night." Could it be? Do the woods produce some kind of earthy pheromone that pulls me deeper into its dark, damp, tribe of crazy every time I ride at night? 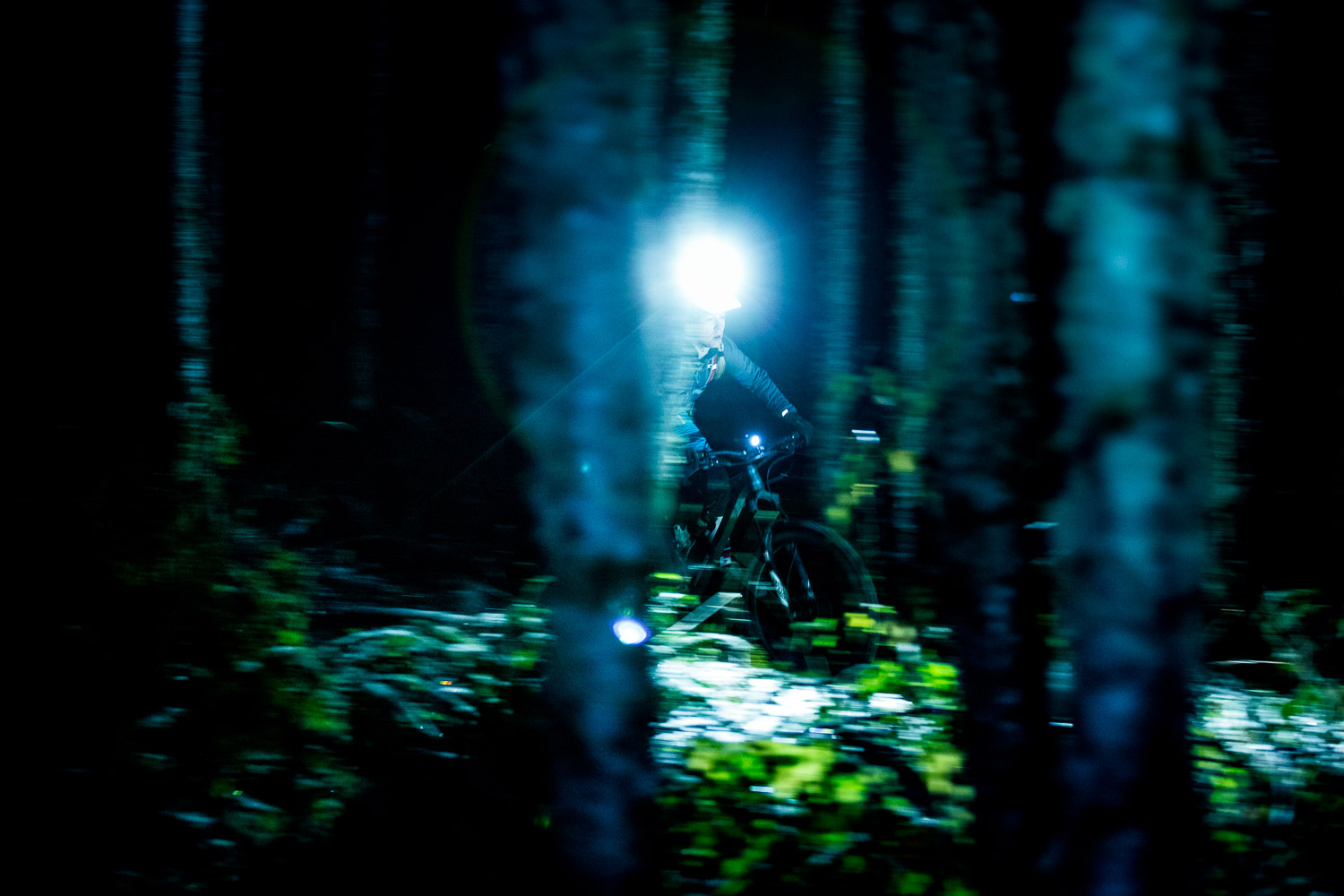 I have no doubt that the majority of senses are heightened during a night ride; the most obvious being sight. Due to lack of overall light, your pupils are on full expanse mode to pull all available light from the darkest nooks and crannies of the ferns that bow down as you ride past. It's sort of like being on some kind of a mild hallucinogen. Your brain and eyes are working in such an overloaded state that everything looks slightly different. Combine that effort with a brain that's equal parts terrified of the Big Bad Wolf chasing you down the trail to eat you as a midnight snack, and the pure elation to be doing something so ridiculously fun and you basically get a massive serotonin release akin to smoking something really nice.

Tonight as I was pedaling alone in the deep, deep snow I noticed so many things that would never stand out on a solo ride during the day. The sounds were loud, as if someone was playing my bike riding soundtrack on a stereo amplified to stupidly high degree. Every exhale was full of deep energy that I was using to push me through the snow that felt like some sort of hybrid of quicksand and perfectly tacky dirt: a moving conundrum beneath my tires.  Maxxis rubber tried with all of its might to grip against the 3-day old snow. Fortunately, it has remained cold enough that the snow was still light and soft, with a thin layer of hoar frost to add a fairytale-like sparkle to the surface of everything. I felt like I was navigating a crystal forest as everything sparkled in a shimmering silvery white. The soft breeze blew loose snow out of the trees and as my light caught the falling flakes it captured walls of spectacular rainbows that created a corridor for me as I crunched along.

Any skier, snowboarder or alpinist will tell you that there's something truly special about being alone in a snowy world. The snow's natural sound damping provides a stillness to the air that nothing else can replicate. As a mountain biker, riding in the snow isn't on the top of my priority list, but simply riding is. We've had an unseasonably snowy winter in northwest Washington and we haven't had clear trails for weeks. If I'd waited for the snow to clear, I wouldn't be able to do my job and I wouldn't have experienced the surprisingly fun rides I've taken in the snow. But since I also prefer to ride at night the two experiences together have brought my appreciation of nature's curve balls to a new level.

First tracks are something to love on skis or a snowboard. It's something wholly unheard of for me on a bike. I had first tracks tonight. I stopped to look at my perfectly imprinted tire tracks that snaked along a white blanket of single track shrouded by ferns taller than I. Exhaling, I watched my breath curl into the air and disperse into the cold, clear night. All around me branches hung low under the pressure of frozen water. The world sparkled to show me it was alive and excited that I was there. My tunnel of light guided me to the top of our local hill. There was no one around, only the curios eyes of ferns, or were they creatures? The sound of silence was deafening and lovely. I pointed my bike downhill and half rode, half skied my way back to my house, drifting corners and laughing manically the entire way. Almost certainly white-knuckled under my gloves, I somehow managed to stay upright and on the gas the entire descent.

I was greeted at the bottom by a hallway of tall, thin, leafless birch trees blending in with the white soft covering on the earth. They stood in unison and I smiled at them fondly as they directed me back to my quiet little tree house waiting warmly on the other side of the frozen road.