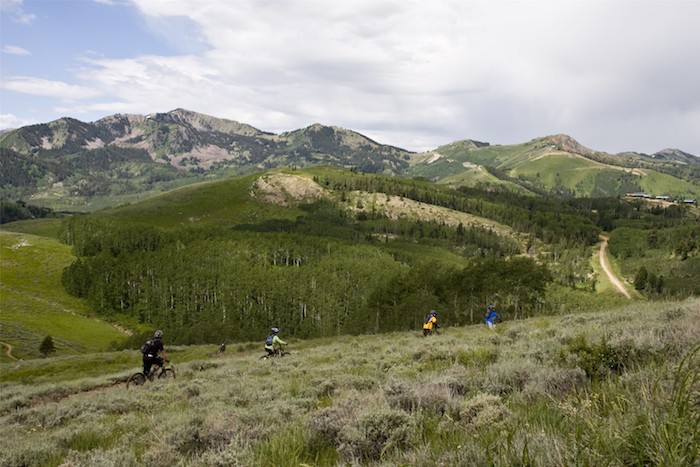 The groomed ski runs at Deer Valley are legendary—as soft and symmetrical as corduroy. It’s no ­surprise, then, that the mountain bike trails feel equally manicured. “We actually get out and rake the runs,” says Steve Graff, the resort’s mountain bike manager.

Located just outside Park City in Utah’s Wasatch Mountains, Deer Valley opened its lifts to bikes in 1992 and has been adding to its network of trails ever since. More than 40 runs spiral down from three peaks. Unlike at some newer parks, where the focus is on monster jumps, many of the trails here have an old-school feel: The narrow paths follow the mountain’s contours and contain fewer man-made features.

The trails are not easy, though, and most of them cater to intermediate and advanced riders. Bald Mountain, the highest of Deer Valley’s three peaks with bike trails, crests at more than 9,400 feet. From there, many of the routes pitch down steep, rock-strewn grades. Survive that test and you’re rewarded with moist, pleasantly tacky paths that slip into aspen groves. By late July, alpine fields pop with primrose, geraniums, blue bells, and other wildflowers. Round a corner high up on Deer Camp and it feels like you’re floating in a sea of flowers, surrounded by snowcapped peaks. “Even hardened downhillers feel the urge to yodel,” says Graff.

If you tire of riding Deer Valley’s lifts, hop on a cross-country bike and climb to the Mid Mountain Trail. The high-alpine route wends between 10,000-foot peaks and connects you to more than 400 miles of ­singletrack in the Park City area.