When I was asked to travel to Bali for a shoot with one of my best friends, Geoff Gulevich, I naturally jumped at the opportunity. Sandy beaches, tropical jungles, and waterfalls are usually what fills people’s minds when they think of Bali. Our first few days in Canggu were exactly that: riding mopeds to the beach, surfing, drinking coconut smoothies, visiting temples and riding the Bali Bike park. 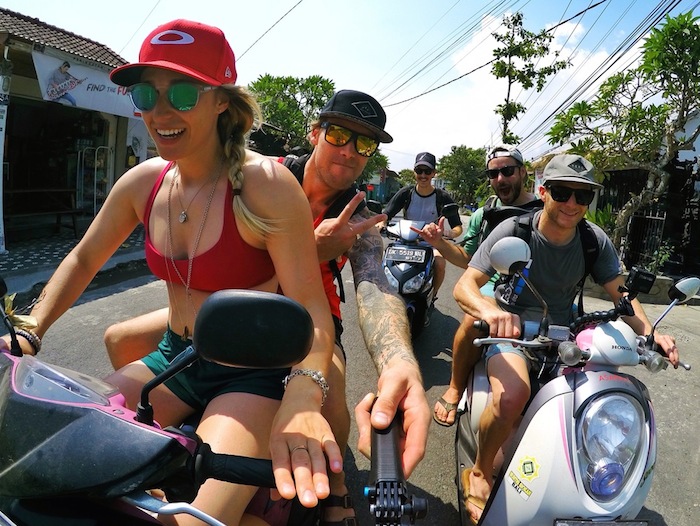 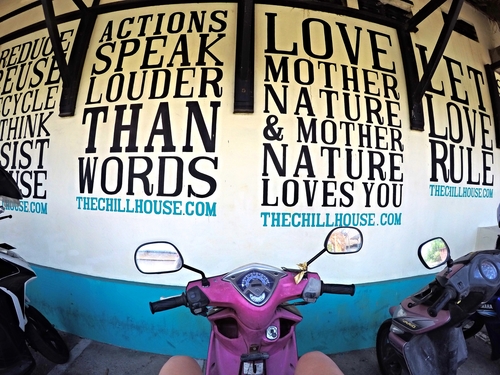 sunset surfing is definitely a must, even if you're there mostly just to take photos on the beach :P 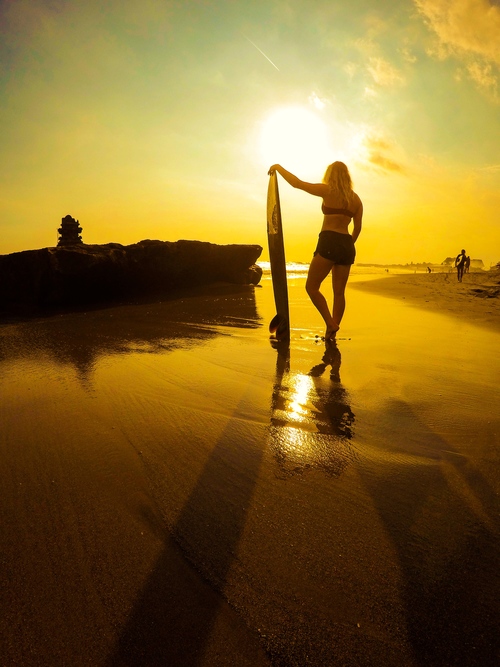 The rice fields were another amazing site to see with the crew: 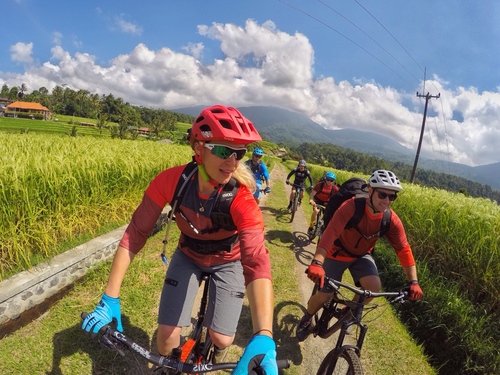 A 5-10 minute scoot in any direction from The Chillhouse and you'll find plenty of cool shops, bars, restaurants, and of course, beaches: 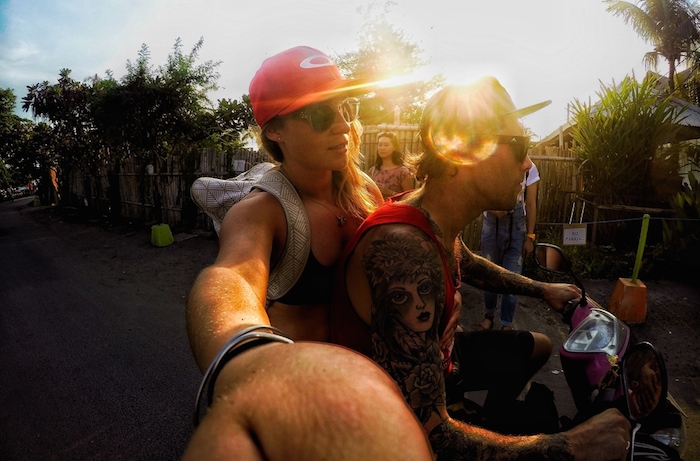 It was turning out to be an absolutely amazing trip, but there was one zone I was itching to ride. I'd seen footage Geoff took from his last trip to the area of a ridge-line: Narrow and twisting, a thin ribbon of dirt wrapping around the very edge of the Batur Volcano. With steam rising from the volcanic rocks below, the line looked dangerous, yet one of the most beautiful things I'd ever seen. A slip off of either side of the path and you'd be tumbling for a very long time. I didn't know how or what it would take to get there, but I was willing to fly across the world to try.

As we neared the end of our drive, we came out along a ridge and suddenly got a plain view of where we were headed. It was absolutely breathtaking, and I couldn't wait to get over there: 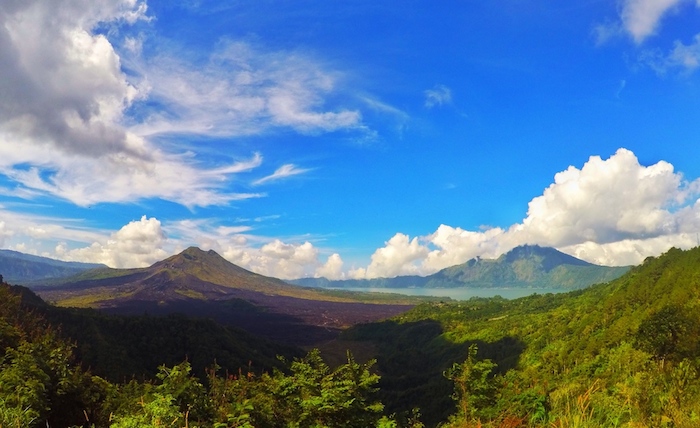 We left the comfort of The Chillhouse in Canggu the day before the ridgeline ride to get out to Batur and grab some shots of the black sand dunes that pile against the base of the volcano. We shot until dark, had dinner, and went to bed, giddy for what the (very) early morning would bring. This is why I was here. This is what I'd been waiting for.

Riding on the black sand dunes at the base of the Batur volcano was so different than anything I'd ever ridden before, but just as fun. 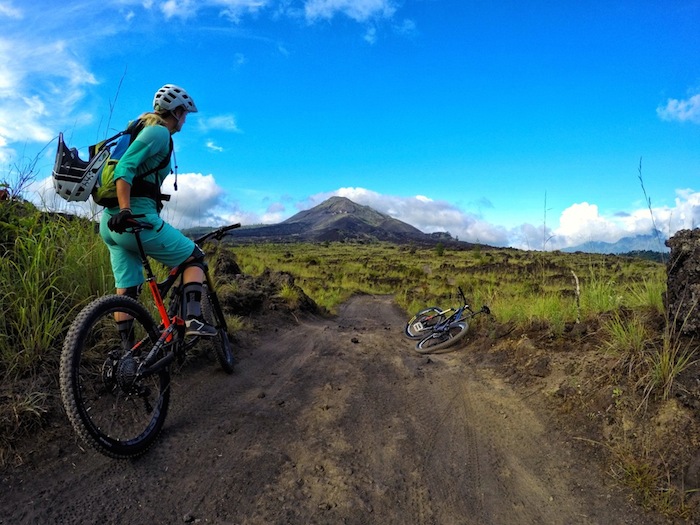 Chasing Geoff on the moon: 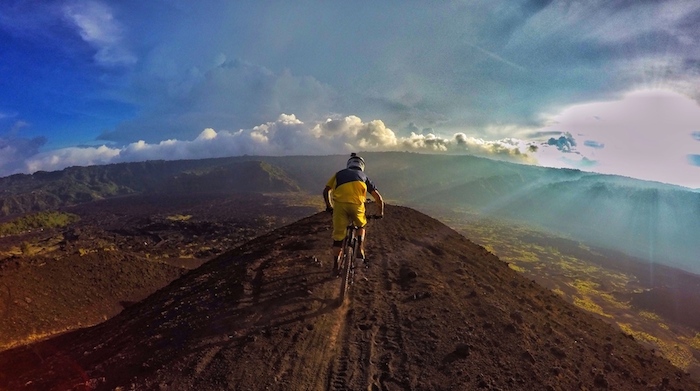 The Mission Pro was the perfect bike for the trip: big enough to hit some freeride lines, but small enough to hike up and down a mountainside all day. 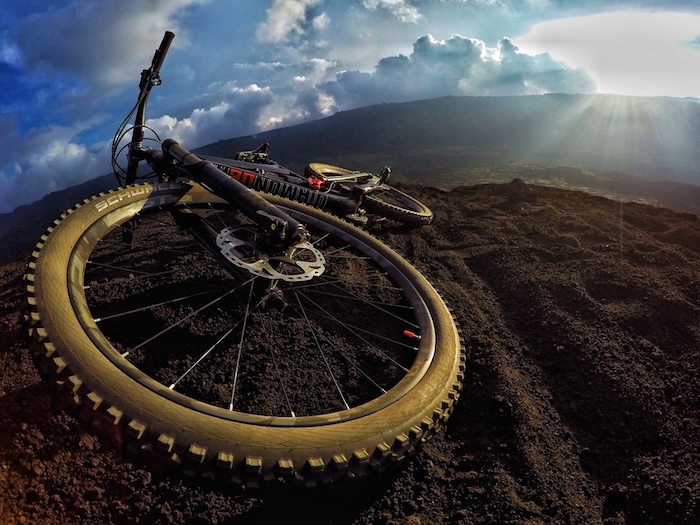 These kids were so curious about Geoff and I's bikes that we let them ride them around. I think they were a bit disappointed there wasn't a motor attached to them. 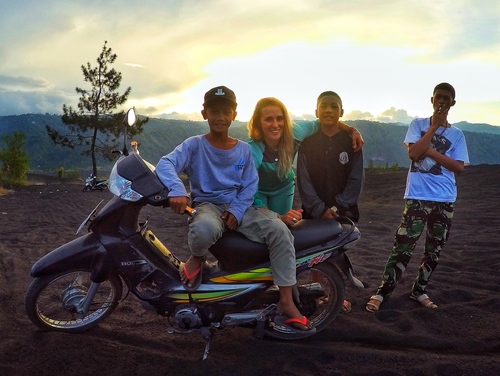 The hike out of the black sands was about 15 minutes on foot. Our camera guys had no transportation, so our curious friends insisted they hop onto the back of their motos. The boy pictured here is 10 years old, and dreams of becoming a pro motocross racer: 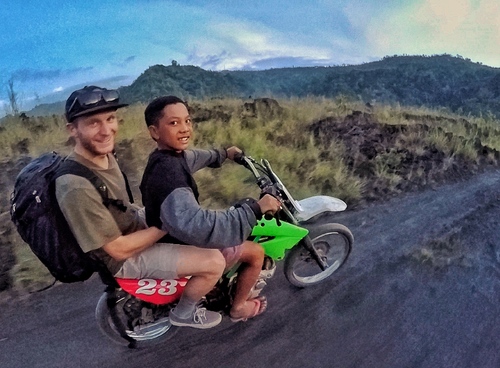 It felt like I hadn’t even gotten comfortable on the brick-like pillows and ant-riddled bed before my alarm shocked me awake at 3:15am. Hungry and dizzy from lack of sleep, I got dressed, filled my pack with water and strapped on my headlamp. The rest of the crew was in similar shape. Being in a tiny town, nothing was open, and I'd forgotten my bars back at The Chillhouse, so we started our dark ascent up the Volcano running only on our mounting excitement and adrenaline for what was to come. 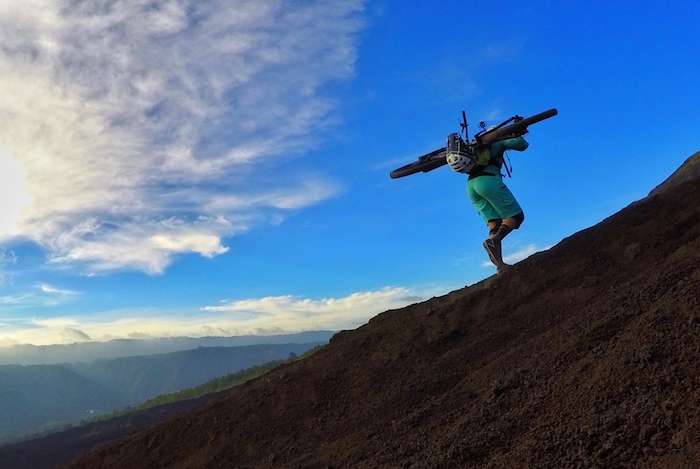 The trail twisted its way through a few different zones. We hiked up sandy, slippery switchbacks in the forest until the trees gave way to tall grass as the trail took a sharp twist upwards among jagged volcanic rock. With my calves and back screaming from wrestling my bike up to this point, I finally gave up all ego and handed my bike to one of our guides. My headlamp was less than sufficient in lighting my way, as it was almost out of battery; I stumbled upwards in the darkness trying to keep an eye on the rest of the group. Nothing could dampen my spirits. I was climbing up the side of a Volcano to ride one of the most gorgeous trails I’d ever seen. I was living the dream! The rock gave way to sand up to the peak: One step forwards, half a step back. Two steps forward, one step back. I could see the tiny dots of flashlights belonging to other people, eager for experience and adventure, a progression line of sleepy travelers to the rim of the Volcano. 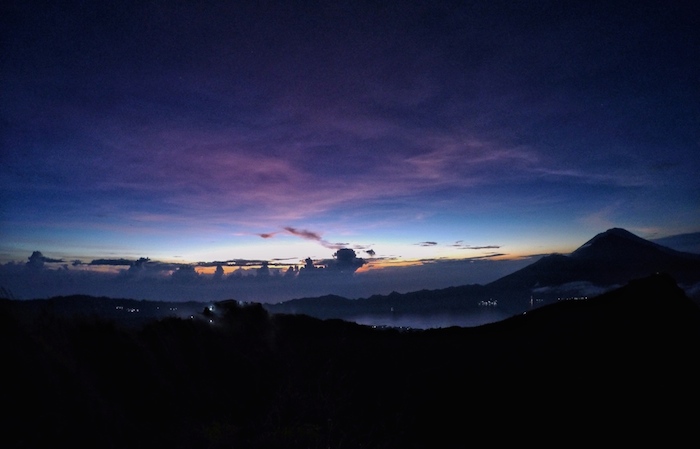 Once we reached the peak, I turned around and could see the sleeping town far beneath us. A few dots of light, the loud hiss of crickets in the tall grass. The sun was starting to turn the sky a soft lavender, and the stars speckled the horizon like tiny diamonds. One of our guides asked if we’d like coffee, and, to our surprise magically reappeared a few minutes later grin as wide as the sky, with a tray and glasses of fresh brewed coffee for us all with enough sugar in it to give us all the kick we needed. Eyes wide open, we waited in awe atop the ridge for the glowing sun below horizon to breach the crater’s edge. It was other-worldly. The mist, the colours of the sky, the curving shape of the craters edge, COFFEE. It was perfection. 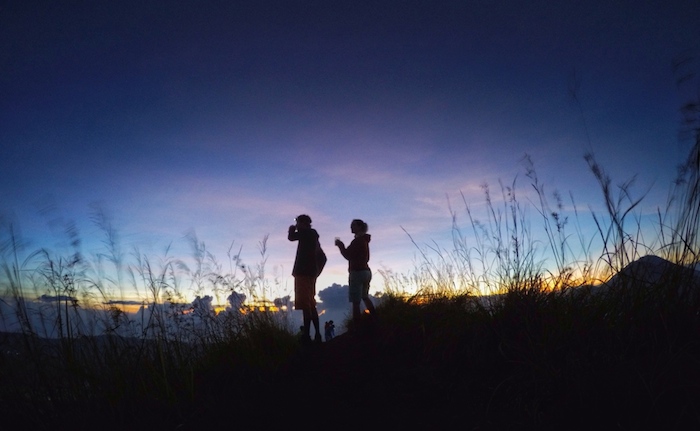 The people I was with, strangers and friends, the dampness of the night mixed with the potential of the morning. There's absolutely nothing in that moment I would've changed. As the sun exploded over the black silhouette of the crater’s edge, we scrambled for our gear. It was go time, and it was absolutely breathtaking. Wide-eyed and mesmerized, I swung my leg over my bike and dropped in behind Geoff. Cruising a razor-sharp ridge-line while the steam from the volcano billowed around us and the burning sky lit our path, I couldn't help but think, “This is why I’m here. This is why I’m alive.” moments like that are few and far in between in life, but that’s what makes them so special. 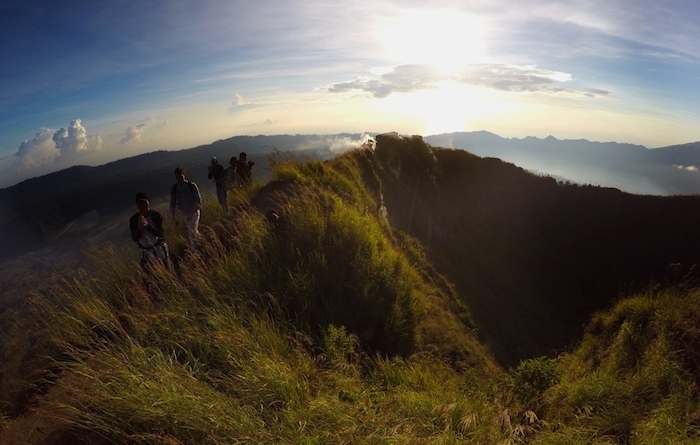 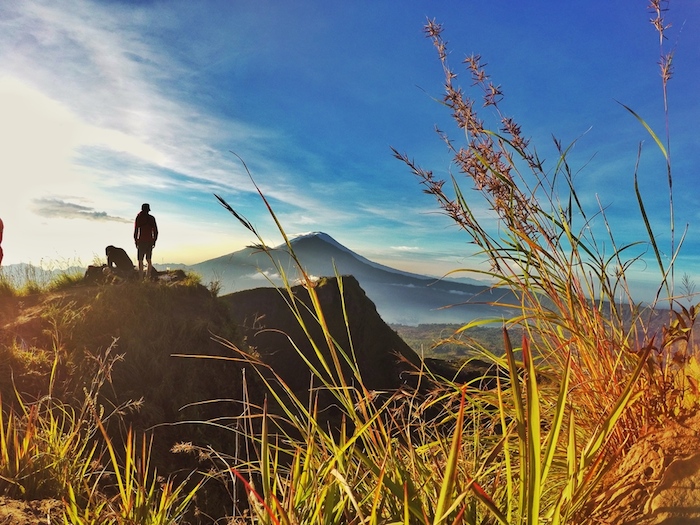 We stayed on the ridge until mid-morning, when finally our hunger forced us back down into town. I wished I could have stayed up there forever. The ride down was a bit harrowing, and I realized just how jagged and steep the ascent was once I could see where I was going. Sliding and finessing our way through the jagged rock, Geoff and I made it down long before the rest of the crew on foot, and grabbed some coffee at the little restaurant adjacent to our accommodation. It seems like no age is too young to start helping out, and the young boy who was serving us would sit down and play his guitar in between running food. I asked to see the guitar, and tuned it for him. He seemed a bit embarrassed of it, and said he had dropped it but mended it as best as he could. The body was taped together, the neck warped and the bridge was superglued back on. The sound of the guitar was less than ideal, and I so badly wished I could’ve helped him out more, because the passion and light in his eyes when he played was all too familiar; something I had felt that very morning watching the sun rise.

By the time the rest of the crew joined us, we were all so hungry that our food order was pretty strange: banana pancakes with honey, spring rolls, and two entrees of rice, egg, and chicken each. With full bellies and minds, we decided to digest the amazing experience we'd just had in the cold and hot pools at our hotel, until we were kindly asked to pack up. We then headed back to Canguu, dozing in and out of sleep in the van, wondering if it was all just an amazing dream. 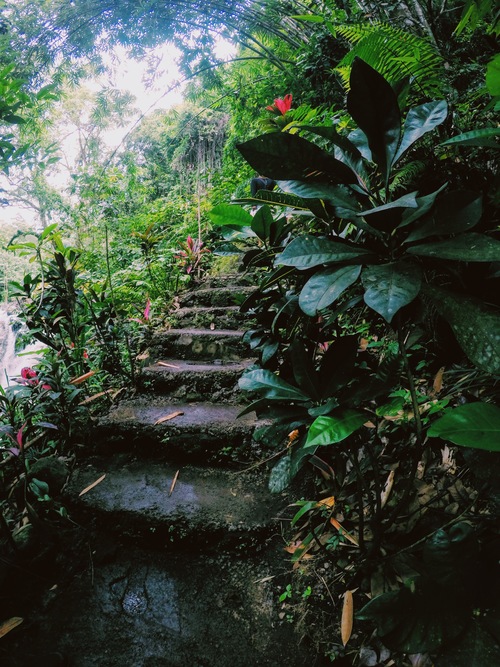 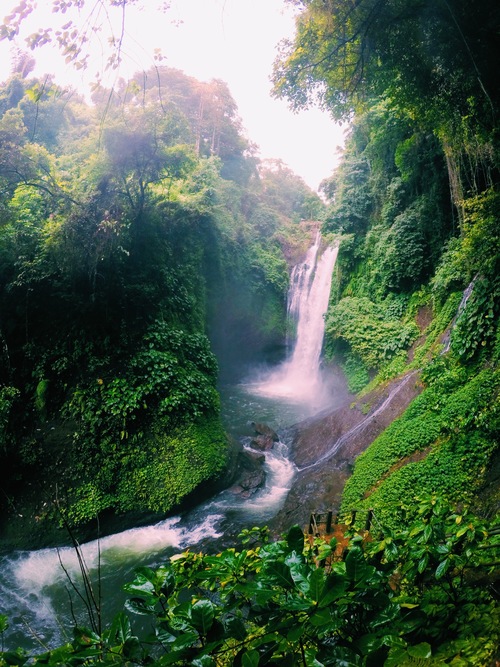 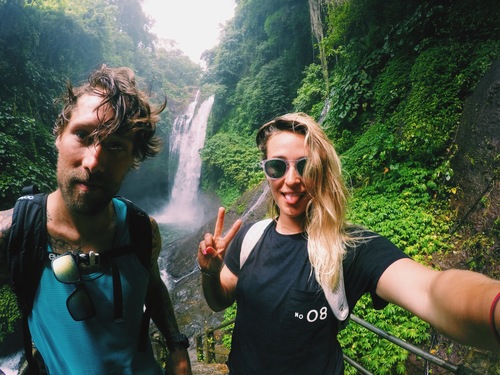 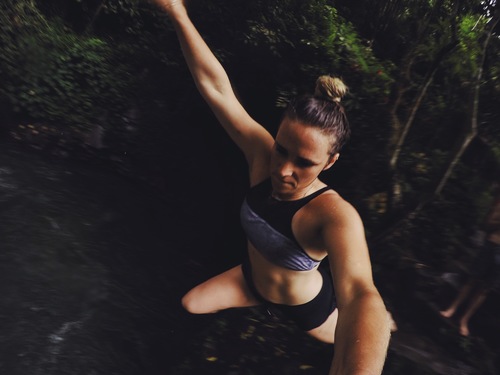 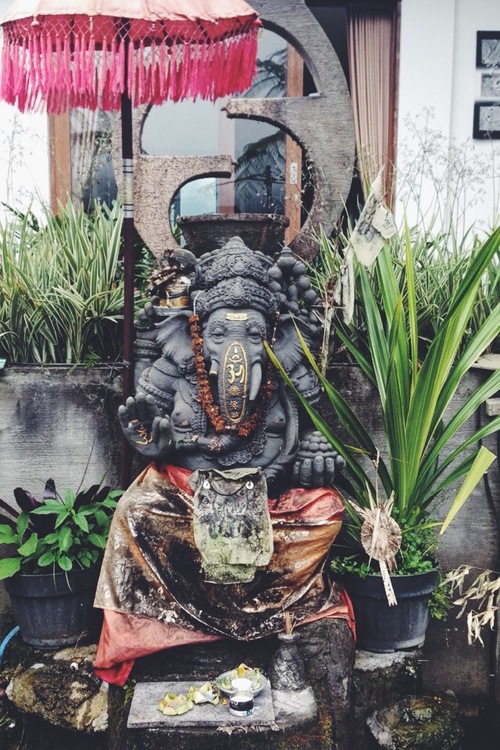 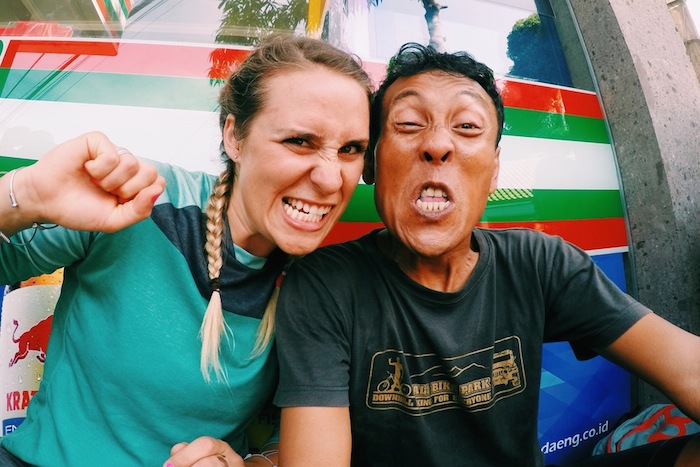 Our main guide, Iwan, was full of energy, knowledge, jokes, and laughter. Generous and kind, the Balinese people really made the trip amazing. Thank you!

And thank you, Micayla, for the great trip report!