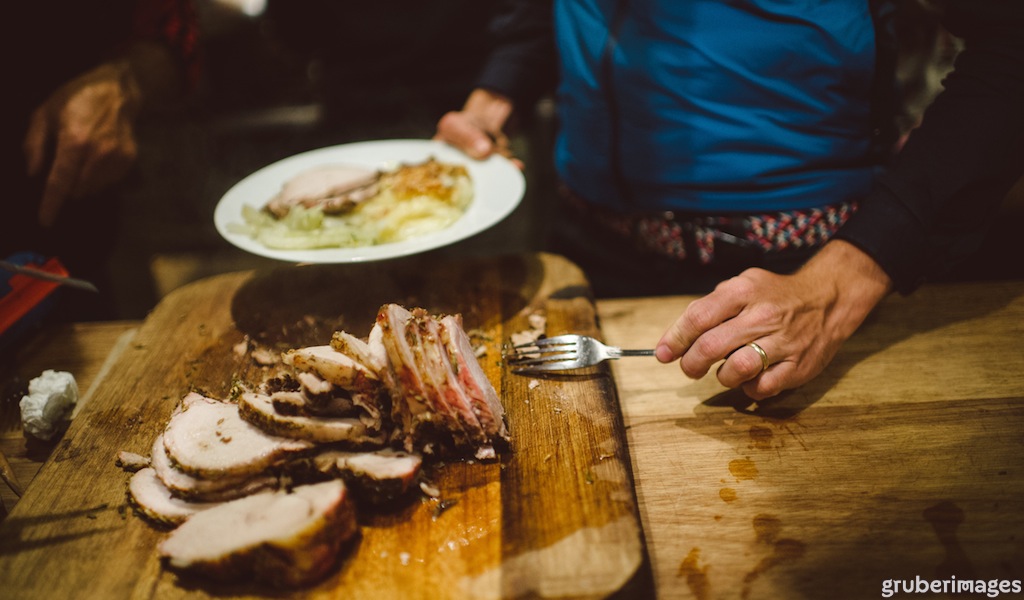 As cyclists, we all know how important nutrition and diet are in ensuring we’re appropriately fuelled for our rides. And it’s no surprise that nutrition trends, like low-carb/high-fat diets (LCHF), catch the eye of cyclists — claims of easy weight-loss and limitless energy are hard to ignore. But as Dr José Areta writes, there’s scant little evidence to suggest LCHF diets are of any real benefit to cyclists, particularly for cyclists that want to ride at high intensity and improve their fitness (and that’s just about all of us).

Ponferrada, Spain. September 24, 2014. The world time-trial championships. Bradley Wiggins is the fastest man to complete the 47.1km, stopping the clock at 56:25.52. During his performance Wiggins had an average power output of 450 watts and roughly 94% of his energy was derived from the oxidation of carbohydrates (CHO).

Wiggins fuelled that single effort with 370g of CHO, derived mainly from muscle glycogen. As pictured in figures 1 and 2 below, this amount of CHO is substantial and accounts for roughly half the total amount that can be stored in the body of a well-trained and -fed athlete.

Time trials, climbs, establishing breakaways, lead-outs and sprints are all situations that determine race winners in single-day, multi-stage and Grand Tour bike races. All race-winning moves occur at high intensity, and they are all dependent on CHO availability and utilisation. Nevertheless some enthusiasts of low-CHO/high-fat (LCHF) diets suggest incorporating the principles of these dietary practices into the habits of competitive athletes, claiming benefits like ‘losing weight’ and ‘avoiding bonking’.

However, these claims are poorly supported and the biochemical and physiological demands of competitive cycling dictate that high CHO availability and usage are essential both for optimal performance in races and for training at high-intensity.

As shown in the theoretical estimations given above for Wiggins (based on laboratory measures of other individuals) and illustrated with photos of high-CHO nutrients, the rate of CHO oxidation in a top athlete at maximum speed can be very large. However, high rates of CHO oxidation are not limited to elite athletes. An average competitive male, cycling at about 300W for 1 hour would use around 290g of CHO to fuel an all-out TT effort.

In this article I will discuss why the main claims of LCHF — particularly those of ketogenic diets — are unjustified and why adhering to a low-CHO diet is most likely to be counterproductive for any cyclists that are aspiring to improve and reach their peak performance.

THE UNSUPPORTED CLAIMS OF LCHF (KETOGENIC AND NON-KETOGENIC) DIETS

The main claims that supporters of ketogenic diets make are that they help avoiding ‘hitting the wall’ during exercise and that they induce fast and consistent weight loss. However, these claims are not supported by well-controlled studies.

In theory, ketogenic diets avoid the phenomenon of ‘hitting the wall’ or ‘bonking’. These ambiguous terms refer to the incapacity to continue exercising when blood glucose and/or muscle glycogen levels drop below a critical value. Supposedly, the enhanced fat metabolism and lack of CHO dependence for brain and muscle metabolism induced by these diets allow the body to work independently from CHO availability.

Provided that the fat stores are unlimited (when compared to the body’s CHO stores) this would allow exercise to continue without the risk of running out of a ‘critical’ fuel. However, the main study used to support this idea has shown that time to exhaustion when exercising at 62-64% of VO2max (a moderate-low exercise intensity), was on average 151 minutes for keto-adapted individuals, vs. 147 minutes for the non-keto adapted.

Interestingly, despite a lack of significant difference between the two groups, two out of five subjects performed considerably worse in the keto-adapted state (Figure 3). 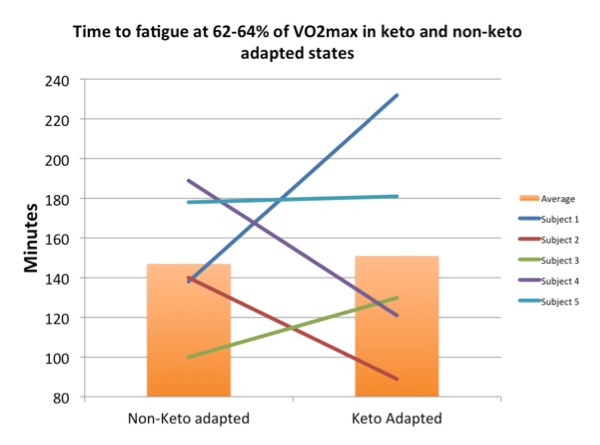 Figure 3. Average and individual values of time to fatigue cycling at 62-64% under keto and non-keto adapted state. No differences reported between the two groups. Values are based on Phinney et al 1983.

The claims that LCHF diets are a good way of losing weight are also poorly supported. Lately, an overwhelming number of anecdotal reports have flooded social media highlighting the benefits of these diets on weight loss in all types of populations. There was even a scientific article (posteriorly pointed out as a lesson of bad science) published using these anecdotal reports.

Sadly, these reports or ‘case studies’ are not good enough to be reliable, as they are merely biased, uncontrolled experiments. Indeed studies comparing LCHF with ‘normal’ low-calorie diets indicate that the weight loss associated with these diets is a consequence of the reduced energy intake and not the reduced CHO intake per se.

Additionally, the fast weight loss observed during the early stages of LCHF diets is most likely to be related to water loss rather than loss of fat or any other tissue. LCHF diets reduce the amount of endogenous (‘in-the-body’) CHO stores. Each gram of muscle glycogen (the body’s main CHO pool) is accompanied by 3-5 grams of water. Therefore, avoiding replenishing the body’s CHO stores can be reflected in a fast 1-2kg weight loss derived from CHO stores plus water.

THE NEED FOR SPEED AND CARBOHYDRATES AS FUEL

One of the problems of LCHF diets for competitive (or simply ‘serious’) cyclists, is that they can induce a chronic depletion of the endogenous CHO stores while adhering to them. These CHO stores are not only important for ‘race-winning moves’ but also for intense training sessions which, more often than not, are key to improving fitness levels.

High speeds require high power outputs and, in turn, high power outputs require high rates of metabolic energy production. Because of the chemical structure of fat and CHO, and the biochemical processes that generate energy from them, the capacity to generate energy from fat is slow compared to CHO. Therefore, fat alone cannot cover the energy needs of high-intensity exercise.

Although fat contains 9 kilocalories (kcal) of energy per gram compared to 4 kcal per gram in CHO, the amount of energy that can be generated per unit of time is much higher for CHO. This is particular true when considering the capacity to generate power anaerobically (figure 4). Additionally, fat requires about 8% more oxygen to generate the same amount of energy as CHO, making it less efficient. In other words, and making an analogy to car fuel it is valid to say that: “If fat was diesel, then CHO would be high-octane fuel.” 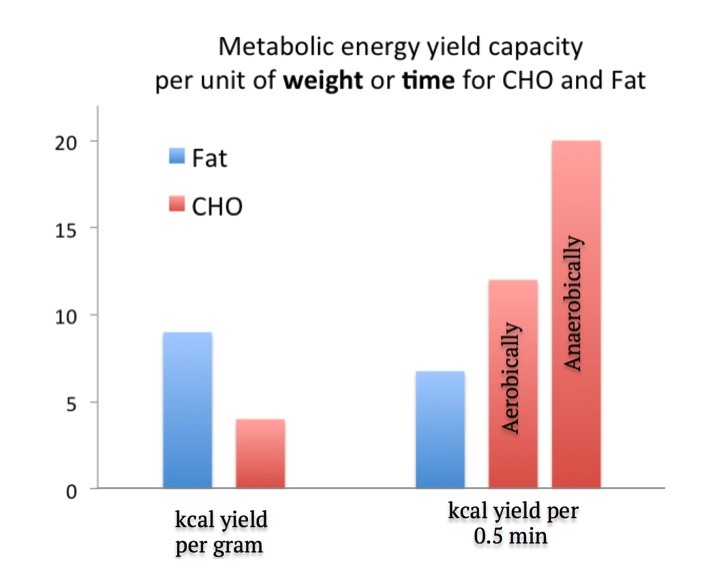 Supporters of ketogenic diets suggest that a fully keto-adapted person could ‘burn’ up to 1.5 grams of fat per minute (about 12.5 kcal per minute). This would be enough energy to generate about 190W of mechanical power output, which would allow a cyclist to stay within the main peloton (out of the wind) on a flat stage.

However, this power output is not enough to match the needs of the tough sections of any race or hard intervals in training. When high power outputs are required, muscles switch from using ‘diesel’ to use ‘high octane fuel’, to keep up with the energy demands of exercise.

This ‘fuel utilisation shift’ is pictured in figure 5 below, which shows that at high intensities the use of CHO as fuel is dominant, if not total. While the shape of this curve is not fixed and the crossover point depends on many variables (mainly time from last CHO meal, CHO loading status, hormonal levels, gender, training level), there is always a dependence on CHO to generate energy at higher intensities; the intensities that determine the ‘winning moves’ in races. 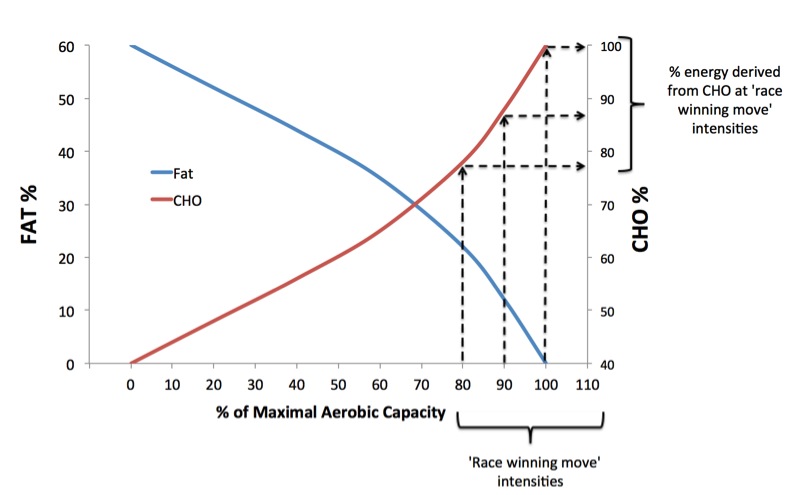 Figure 5. Relationship between relative intensity (as % of maximal aerobic capacity) and percentage energy derived from fat and CHO. ‘Race winning move intensities’ are always dependent on a high if not complete use of CHO to generate energy.

In the body, CHO is stored in the liver and in the skeletal muscles in the form of glycogen (a polymer of glucose). Muscle glycogen is the main CHO store, containing about 500-700g depending on the size of the person and their training and nutritional status.

A CHO-rich diet will normalise stores within 24 hours but this requires high amounts of CHO intake right after stopping exercise. If the appropriate guidelines are not followed, glycogen stores remain low. As shown in Figure 6 below, if a LCHF diet is followed after a glycogen-depleting session, the athlete’s glycogen content remains very low. 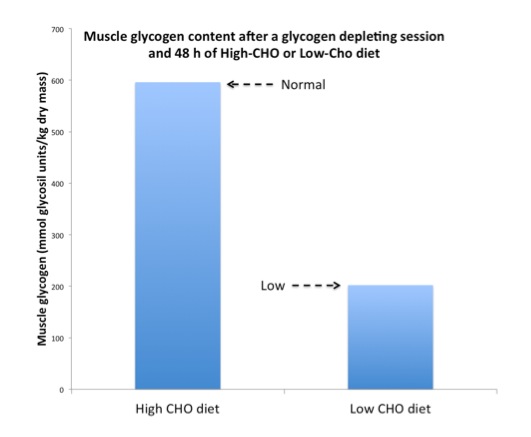 Figure 6. After an intense cycling session muscle glycogen (the main CHO pool) goes back to normal values with a normal diet but remains depleted if following a LCHF diet. Based on data from Arkinstall et al 2004.

This means that the fuel tank for ‘high octane fuel’ is chronically low in a cyclist following a LCHF diet. This scenario will result in a reduced capacity to respond to repeated intense efforts, which can directly affect racing and training at high intensity.

In conclusion, the evidence to support the use of LCHF diets to enhance sports performance is very limited. Hundreds of studies on sports physiology and nutrition indicate that the principles of LCHF diets are most likely to negatively affect performance of a cyclist rather than improve it.

Cyclists looking into the claimed benefits of LCHF for losing weight will probably be better off first assessing if they actually need to drop weight and, if so, having a sensitive approach to energy intake and expenditure for weight loss.

From my point of view, LCHF diets are very interesting from a nutritional and physiological perspective and I think that further research in the area will enrich our knowledge about how the human body responds to them. But as things stand, current knowledge about LCHF diets is very limited and making claims about their positive effects is speculative.

Most cyclists belong to a population in which generating energy rapidly and repeatedly is necessary. Impairing CHO stores will affect this capacity. Therefore, if you want to keep training hard and racing fast, a LCHF diet is probably not the right option.

Thanks to Dr. José Areta and CyclingTips for the content.