In addition to individual events, Diamondback's Ben Collins competes as a guide with Aaron Scheidies, a visually-impaired triathlete. Here's Ben's account of their day at the Paralympic Trials TT, attempting to qualify for Rio. Here, in Ben's own words, is the inspiring story of dedication and perseverance by a pair of amazing teammates: 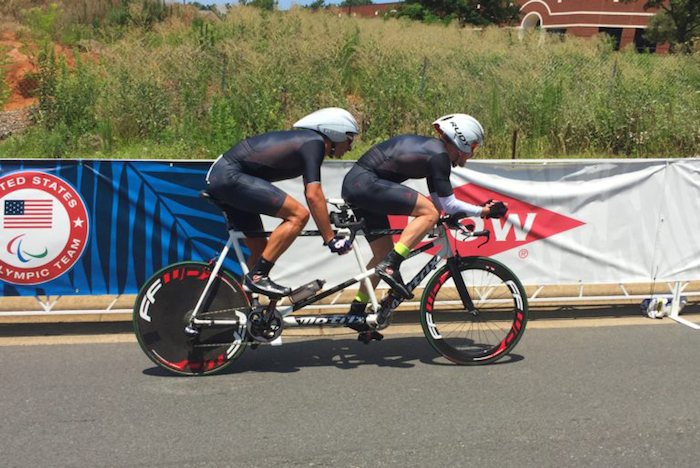 As Aaron and I headed out for the fourth and final lap of the Paralympic Trials TT course, the announcer was out of his seat practically yelling with enthusiasm into the mic, “Right now Aaron Scheidies and Ben Collins are continuing to post the fastest splits of the day for this course, but this lap will have to be even faster for them to qualify for this Paralympic Team! Let’s see what they can do!”

By the time the announcer finished speaking we were gone, leaving behind a group of fans jumping and screaming and biting nails. Our coaches, Mark Sortino and Rick Babbington compared splits, confirming that we needed our final lap to be our fastest, about 15 seconds faster than the third lap split of 9 minutes 11 seconds. Seeing these two coaches deep in discussion the announcer joked, “Mark Sortino and Rick Babbington are over there arguing over whose athlete is doing more work…”

Aaron and I were the last start of the day, racing right up to solar noon and the heat of the day. The shadows shrank with every lap of the course.

The clock ticked by. Knuckles were turning white among the crowd of fans that had dressed in blue C Different with Aaron #Road2Rio t-shirts to come support us. At 8 minutes 30 seconds Rick started leaning over the barrier, craning his neck to see us coming around the bend. Mark glanced at his watch, a bead of sweat dripping from his running visor as the Carolina heat beat down over course.

There was no tandem.

The clock passed 9 minutes, and still Aaron and I were nowhere to be found.

“Something happened,” Rick said softly, his jaw clenching in worry. Mark nodded, the look of worry apparent through his sunglasses.

The clock ticked by, and suddenly cheers could be heard from around the bend. Then, coasting down the hill, there we were. We came nearly to a stop at the bottom of the hill and dismounted as if were were doing a triathlon. We ran the final 100 meters with the bike and crossed the line. 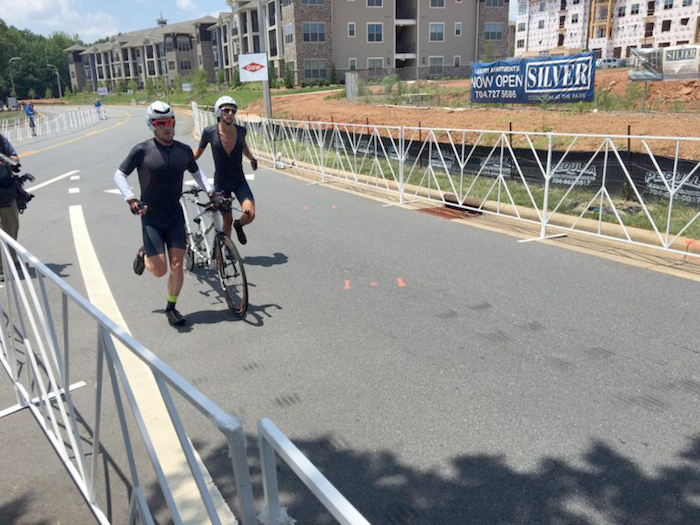 For Aaron and I, we knew we had a tough mark to hit on our final lap. The announcer's words sounded distant as we started that final lap. I heard, “…fastest split of the day, but…” and knew we needed to exceed expectations on the final lap. It was hot, and our third lap had us in no-man’s land, enveloped in pain, too far from the finish to push any harder. I had glanced at the clock as we crossed the lap split line for the final time, and knew the final lap would need to be our best.

Climbing the first hill of that final lap, I felt a surge of power from Aaron and knew he had heard the same thing. This lap was Rio or bust.

We nailed every turn. We came around the final U turn and used the entire road, sweeping our front wheel within inches of the curb as we stood and accelerated back onto the final hill climb. It was a soft left, then a right, a further climb, then descent. I had the course mapped in my head, I had gone over every pedal stroke a hundred times before the race started, and Aaron and I were perfectly in sync. We stood together, we pushed together, we suffered together.

In the last two kilometers of the race were three turns, that took perfect coordination to get through without losing momentum. There was a hard left that we took at a blazing pace, then a long sloping downhill into a right turn, a short kicker up and then the last turn of the race, a left into a steady descent before a small ramped finish. On every previous lap and in training we had nailed this section. The wheels would squeal through the left turn and again on the hard right. We would drop a shoulder, carving the rubber close to the curb and aiming the bike to set us up for the final turn of the course. After the right we would stand for 5 pedal strokes, then sit and pedal through the left, accelerating into the downhill and through the finish.

But this time when we made that right turn there was a crunch and when I looked down the chain had been dropped. “What have I done!?” was my immediate thought. I had put a 1x chainring setup on the bike a few weeks ahead of time in an effort to get a better chain line and simplify our drivetrain to avoid any of the mechanical problems we have faced in previous races. 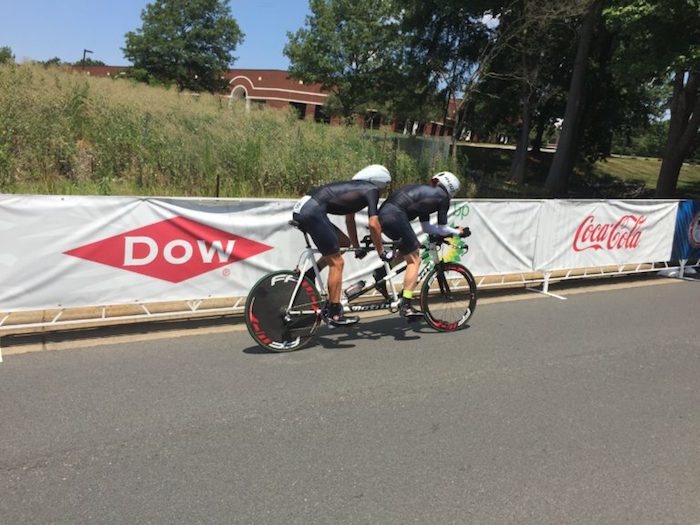 We coasted, I hoped we could get past the small riser and into the downhill section, figuring that stopping to fix the chain at this point would be slower than coasting to the finish… it was 800 meters away!

“We have to run” I said. We made it to the top of the hill and hopped back on. I tried to clip in but my feet were shaking and I couldn’t. We coasted down the hill and as the bike came to a stop 100 meters from the finish I did a flying dismount, forgetting to warn aaron and leaving him perched on the back of the bike. He unclipped and ejected to the back, then grabbed the saddle telling me, “RUN!”.

We crossed the finish line to deafening cheers. But our road to Rio was over. We walked the bike away from the crowd, tears already streaming down both our cheeks.

I wanted to smash the bike. I wanted to throw it into a bon fire and watch it melt. I took off my helmet and tossed it in the grass, removing my temptation to smash it on a rock. More expletives crossed my mind in those first sixty seconds than an entire Quentin Tarantino movie marathon. I was mad, but mainly I felt like I must have missed something. I felt like I had let Aaron down. I surely could have done something to prevent this from happening. Something.

I stood fuming. I don’t even remember taking off my gloves. I turned around. Truth be told I intended to go back to the bike to give it a solid kick. I wanted to hurt that demon bike – but before I could take out my tantrum on the inanimate object I had spent so much time preparing, I was stopped by the scene unfolding in front of me.

Aaron was sitting on the curb, still wearing his helmet, his sunglasses resting on the grass beside him, his head resting in his open palms, his back convulsing with every sob. Rick and Mark, Aaron’s wife and parents, the national team coaches, our nutritionist and sport psychologist – everyone that had supported us on this journey within shouting distance was hustling over to where Aaron sat. I was angry at myself for missing something, for somehow letting Aaron down in this race, and yet here I am, the only person on Aaron’s team still stuck on the past and ignoring Aaron now, when he needed all of us.

I picked up my helmet and gloves and took a deep breath. I had tears on my cheeks as I hugged Aaron. I don’t know what exactly he said in the moment. He told me it was a great race. He told me we did our best and he thanked me.

That thank you stung. I was holding in a fireball of anger for the universe, blaming myself for ruining Aaron’s Paralympic journey. Thank you was the last thing I expected but it slapped me back to reality. Back to the partnership that Aaron and I had formed, and to the trust we have developed through this journey.

We embraced for a moment, wiped our faces and began walking toward the award podium. We had finished second in our category, despite running to the finish line. 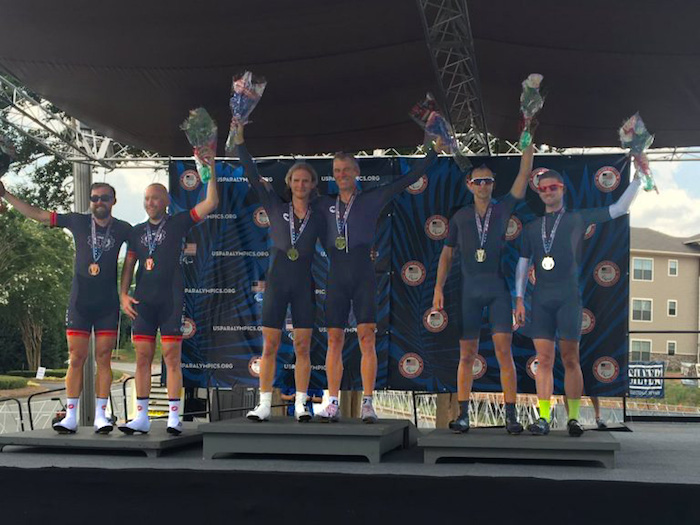 I ran some numbers later on, and used my Garmin file to get my best estimate of where we were on the course compared to previous lap times. To qualify for Rio we would have needed to finish in 34:11. That would have been a 8 minute final lap, or 70 seconds faster than our third lap of 9:11. When the chain came off we were 10 seconds ahead of our time to that point on the third lap, so realistically we would have finished around 35:10. Third in the standings, and a full minute off of Rio qualification. We had the best time trial that we’ve had together. We raced our asses off, and were on track to post one of the most impressive tandem time trials in the history of US Paralympic cycling. We did our best. We did better than anyone predicted we would, and – mechanical aside – we still came up short.

Congratulations, Aaron and Ben. And thanks for reminding us to never give up.