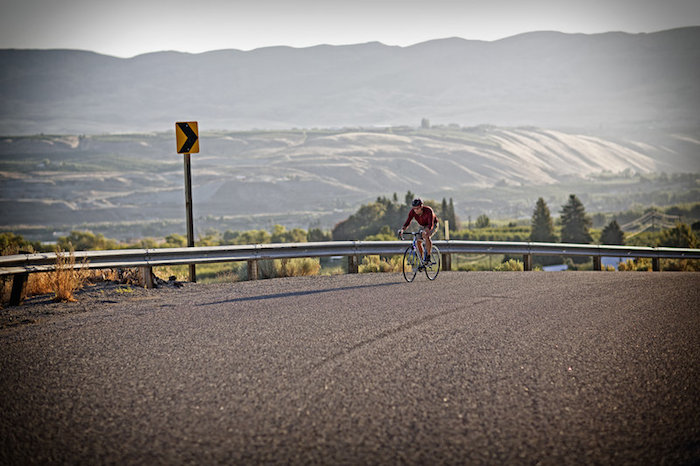 The more you ride, the more life’s meaningful events become inseparable from whatever road you’re on

I was still carrying some speed from the hill when I saw that the plum tree was dying. I had my hands off the bar. The gear I’d spun through the heart of the descent had been a little too big now for some time but, I remember, riding no-handed had felt so natural, so liberating in some way, so much like a physical expression of the joy of moving with grace and speed that I had not thought to reach forward to tap the shifter, and my pedal stroke was at a lazy 50 or so per minute.

Way up on the steep grassy yard to the right, at a height and a position off the roadside you only ever see if you specifically try to, the plum tree lay with its branches aground, bent and maybe uprooted by the season’s snows and sleets and winds, and, I guess, by time.

Without touching the handlebar I reached back into my jersey pocket and took out my phone and held the home button down and by voice sent a text to Beth, then put the phone back and looked over my shoulder but I had gone too far to see the tree anymore, and it was then I dropped forward and wrapped my hands around the hoods and realized I was tired, and I shifted and spun my legs until the tightness that had come upon them loosened and I could breathe without thinking about doing so.

The tree had been ours, once. We had been young, and the little­ money we earned had seemed like a lot, and we had bought a place, and we had put up a wooden fence and got a dog and put in a small garden in a corner of the yard, all of that for the first time together, and we were just about to be parents when Beth had the ­miscarriage. We’d already taken to calling him by the nickname we’d given him almost from the beginning, and all these years later I still cannot say whether I believe he died or never had a chance to live. I know for certain I mourned him and sometimes even now miss him, though not too much anymore, not too often, which are facts that put a new edge on that old grief when it does come. One day one of us bought a plum sapling and brought it home, and we took it out to one of the barest spots in the yard, and we planted it, and said a few lines about mortality and love. And a year or two later, we moved.

Most of our rides—the lunch rides and the long weekend ones to the south and most of the good hilly routes—start or end or do both on the road that goes by the old house. I look for the tree every time, and though we have almost never spoken of it, when Beth and I are in the group together, I’ve seen her look up there, too. Once or twice a day, three or four days a week for most of the past 15 years I’ve ridden by that plum tree. This is one of those things no one who is not a cyclist can fully understand about what it is we do on our bikes, what happens during those hours and hours and hours we are pedaling our lives away: We are living them, too.

I remember climbing out of Powder Valley with Jeremy the day he found out for certain his father had some form of dementia and was ill in a lot of other ways and would not live long, and he told me, as well, that he knew an ancestral legacy of such things meant he himself would come to a ragged end. Ray and I were riding east out of Vera Cruz when he told me he was going to get divorced, and we went along, our cadences matching and our shoulders and bars tapping, back in that time when he and I rode together so much that we were something like brothers, and I don’t recall much of what I said to him, but I remember we went by the llama farm and up the stiff climb on Hay to the gradual rise back out of the far ­valley and it was a good ride. Taylor and I were climbing up out of Oley, the two best on the hill that day, the pace anyone else set nothing but a lark, when he said to me that he wasn’t telling everyone yet but he was going to be a father.

Beth texted me back, and I replied. I was in town by then, and I put my phone away and started my traverse up through the neighborhoods toward my home. Jeremy’s dad is hanging in there. Ray lives in an unfinished attic these days. Taylor’s daughter is beautiful. I didn’t know if the plum tree would be there ­tomorrow. But I knew the ride would.