Ever been more than a little creeped out on a ride? Us too. Here, we rounded up a few of the spookiest stories you shared with us. 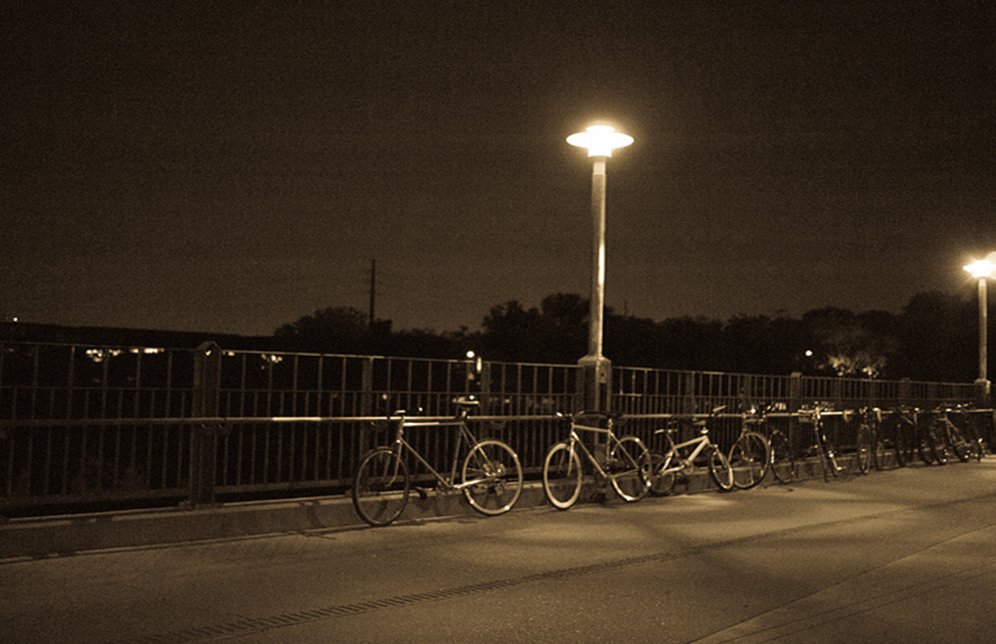 The Uninvited Rider
One night, while riding the local trails near my house alone after sunset, I encountered an unwanted riding partner.

I knew there had been a dead body found on the nature preserve months ago, but I never gave it much thought. My regular one-hour loop was going as planned, heading up Blueberry Trail to the top of the mountain and then to Bones Trail, turning right onto Waterfall and descending down to the access road for the nice climb back to the truck. While riding Blueberry, I stopped and took a picture with my cell phone of the lights in the valley below and enjoyed the absolute stillness of the top of the mountain.

About 15 minutes later, after crossing Bones and starting down Waterfall, I had an eerie sensation. Not being a believer in ghosts, UFO abductions, or the like, I try to be skeptical and often find myself snickering at others’ claims of otherwordly encounters. But that being said, as I descended the singletrack with only my helmet light to show the way, I distinctly felt as if there was someone looking over my shoulder for the whole way down. I was more puzzled than freaked out. I remember looking over my right shoulder for a second as I rode, completely expecting to see something—as if I was driving my truck and someone was in the back seat, leaning forward to whisper something into my ear. Once I made it down to the end of Waterfall, I started climbing the old fire road back to my truck and the feeling instantly went away. I stopped and looked into the darkness for a minute or two wondering what I had just experienced. The rest of the ride was uneventful and I finished up, put the bike in the back of the truck, and went home.

A few days later, while hanging out at a local bike shop, I shared my story with some friends with the expectation of getting a few laughs. But a riding friend of mine looked shocked and said that he’d had the same experience on the exact same trail just a day or two before me. After a quick Internet search, we discovered that we both rode the trail almost one year to the day that the man went missing from his home and died on what is now the top of Waterfall trail.

A Scary Descent
When I was about to descend a hill on a breezy day, a semi-truck appeared out of nowhere, intent on passing me at a high rate of speed. I guess I was caught in his draft because I flew down the hill. I did not realize it at first, but I looked down and noticed my handlebar was not pointed the direction I was going. Strava recorded my high speed that day as 99.7 mph.

A Cheerful Ghost
When I first moved to Emmaus, I lived in a 200-year-old farmhouse for a month. Sometimes, I’d hear someone whistling, and it sounded loud enough that it could have been someone in the house. This was when no one was home, and it was a large enough property that I knew it wasn’t the neighbors. So I started to think maybe the house was haunted by a ghost. If so, I wasn’t particularly concerned; the ghost was whistling a pretty happy tune so he or she seemed to be generally in a pretty good mood. But the moment I became convinced was one Saturday afternoon when I headed out for a road ride. The whistling followed me for a solid mile or two down the road—and no, it wasn’t the wind or my wheels—before I could drop the ghost.

Share
Related Categories
Related Articles
Go Nuts
SIBLINGS
Helpful Recovery Foods
Riding Blind
Why cycling makes us happy: the positive psychology of being on the bike
How to Embrace Riding in the Rain
Bike Commuting Essentials
A Day in the Desert: Diamondback Meets Tonka
Trainer Tips
Conquer Your Ride