Thanks to Garth Fox, Michi's coach, for this look behind the scenes of a professional triathlete's training regimen: 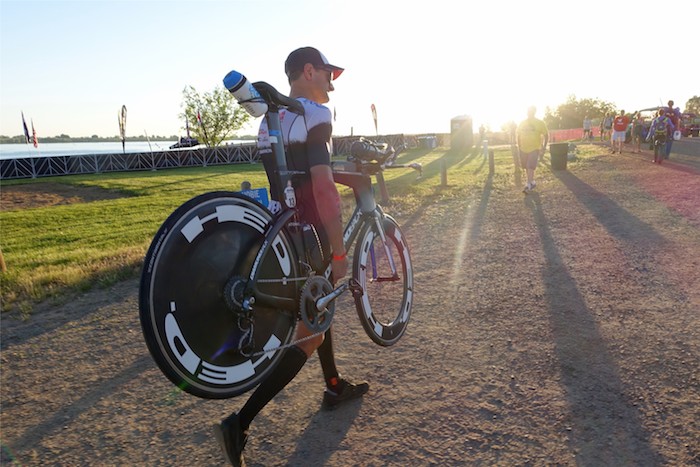 After a disastrous triple puncture day just three weeks previously at Ironman Texas, it was great to see SRM sponsored pro triathlete Michi Weiss getting back to business and doing what he does best – riding hard and fast. So on a warm and sunny Saturday in Boulder, Colorado and after a decent but uneventful 1.9km swim which saw Michi exit T1 four minutes down on the leaders, it was time to put his new aero optimized DiamondBack Serios through its paces over the technical bike course. In so doing, he not only set the fastest bike split of the day but also recorded the fastest ever bike split in Ironman 70.3 Boulder history. A decent day back in the office, especially as he also ran well off the bike posting a 1h18m half marathon and came home in 6th place overall. Lets take a closer look at Michi’s SRM power file. 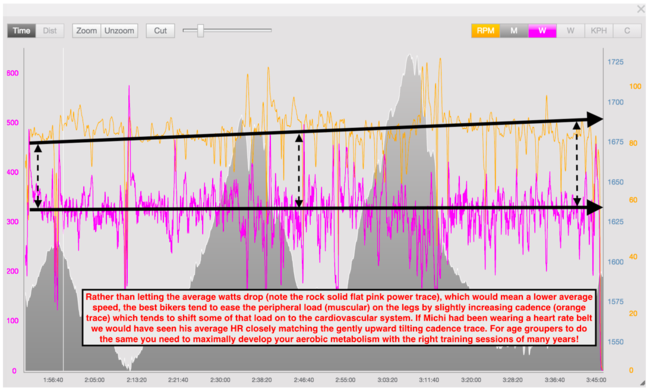 Spinning Up The Power

As usual, there is always something that age groupers can learn from examining how the best triathlon cyclists attack a racecourse. If you look closely at the file below you can see how the orange trace (cadence/rpm) is gently rising while the pink trace (watts) below it is rock steady. Power is speed and speed means prizes, so the pro athlete will tend do whatever is necessary (if he has the physical condition) to keep the watts from falling off. So as Michi’s legs were starting to scream at him from the effort of maintaining around 320W, rather than give in to the discomfort and allow himself to apply less pressure to the pedals (and slow down), he gradually allowed his cadence to increase effectively easing the tension on the muscles. In human physiology nothing is ever gained for free, everything must be earned and paid for and so the compromise here is a shift of the muscular strain on to the cardiovascular system and an increased heart rate. All well and good providing the athlete has the physical capacity to cope with what is just a physiological version of ‘robbing Peter to pay Paul’. Eventually fatigue will find a way to slow us down, but the trick is – as Michi demonstrates here – to delay the inevitable as long as possible. I should add that this ‘strategy’ occurs on the fly and at the sub-conscious level by the highly conditioned and motivated athlete and not something that is planned in advance. That said, you can and should certainly do so in training. 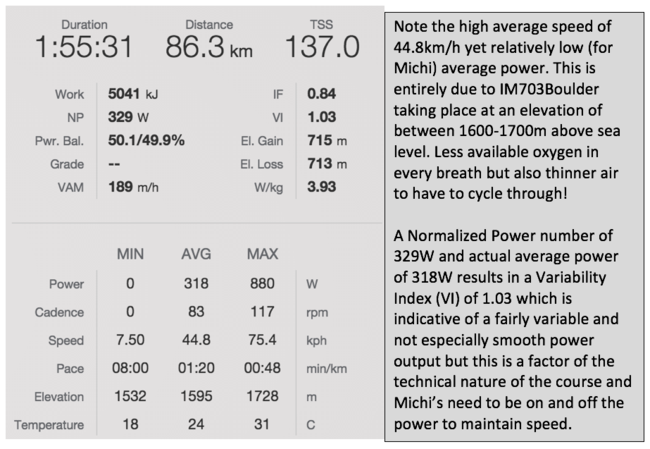 It’s Your Attitude That Determines Your Altitude…

The Ironman 70.3 Boulder bike course is located at an average elevation of about 1700m (5500ft) above sea level. While not considered high altitude, it is certainly sufficient to reduce a cyclists’ average power output. At this altitude the air pressure is about 80% of what it is at sea level, leading to an oxygen partial pressure of about 17% (as opposed to the normal 21%), the resulting loss of watts at threshold is around 7%. In Michi’s case this would mean his sea-level Functional Threshold Power (FTP) of 390W is reduced to 363W. Because I know that Michi is typically able to ride a 70.3 bike leg at about 90% (70-80% is typical of age groupers) of his FTP this means that a performance prediction (using the excellent CyclingPowerLab.com resource for performance modelling) results in an average power of 325W. On the day Michi actually produced 319W (329W Normalised Power) showing just what a cycling machine he actually is! 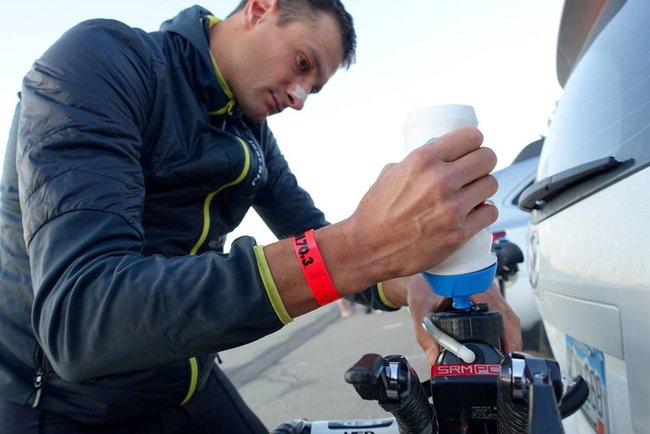 “The question of whether a cyclist can ride faster at altitude hinges on a trade-off. Is his increase in speed due to reduced air density, greater than the speed he loses due to the oxygen limited reduction in power output - something which itself varies with acclimatisation? As a general rule the answer tends to be yes, he will ride faster if his power output is high and he is riding on the flat whereas if he is slow and/or climbing then no, altitude only leads to slowness”. -Rob Kitching, Founder of CyclingPowerLab.com 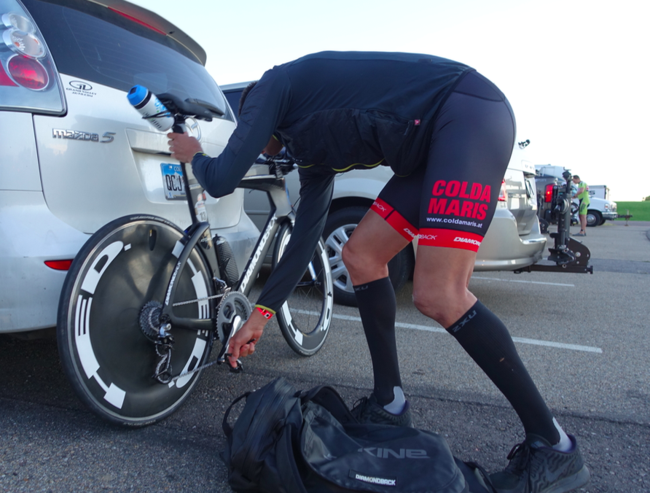 So for the average well trained age grouper who may have a sea-level FTP of 300W and knows he can ride a 70.3 at 80% of his FTP, targeting 240W for the bike leg would be appropriate – at sea level. But by using a performance model for an altitude race like Boulder (or indeed sportive cycling races which are so popular these days and often feature the high mountains of the Alps, Pyrenees and Rockies where altitude most certainly effects sustainable climbing power outputs) it would quickly become clear that due to the reduced partial pressure of O2 and factoring in that this athlete may not have had the time to acclimatize for the race, a 30W reduction in target watts would be advised leading to a race power target of 210W, which due to the lower air density would still translate into a slightly higher average speed than he could expect at his usual 240W at sea-level – that PR would absolutely still be on! 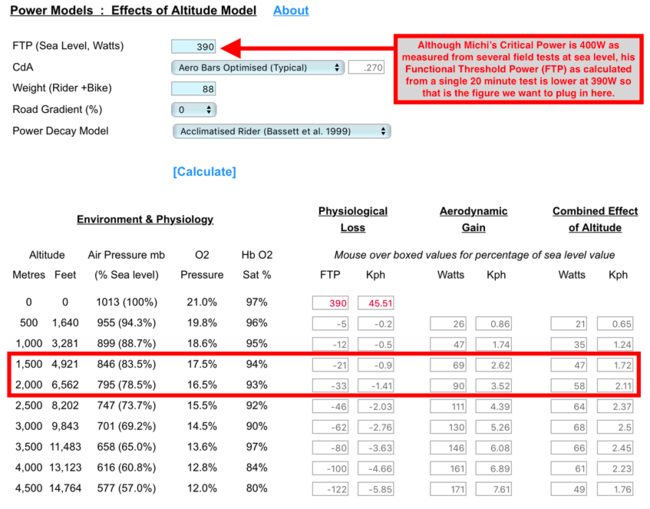 But while the reduced partial pressure of O2 has physiological implications in the form of reduced power output, even for an athlete who has spent 3 months acclimatizing as Michi had (albeit he also had a 3 week stint at sea-level to take part in Ironman Texas where some of the benefits would have eroded in that time), it is worth remembering that while there are fewer oxygen molecules in every breath of air, there are also fewer to have to cycle through, resulting in an increase in speed for a given power output. That is the reason why Michi’s average speed at almost 45km/h was amongst the highest I have seen from him even though the average power output was the lowest! When you have the most accurate power meter as provided by SRM and highly accessible performance modeling provided by CyclingPowerLab.com there really need not be any surprises to either coach or athlete! 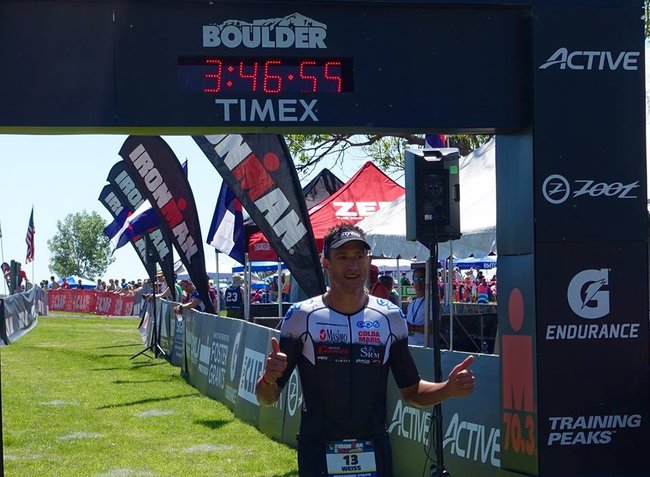 Thank you as always to Michi Weiss for sharing his data with us - if only more top pros would do this! I hope it is both informative and that you are also able to get a few insights into to how the best in the business go about their business! We wish Michi all the best in his upcoming home Ironman in Klagenfurt, Austria on 26th June.

May the Force (x Velocity) be with you!

this article first appeared on srm.de