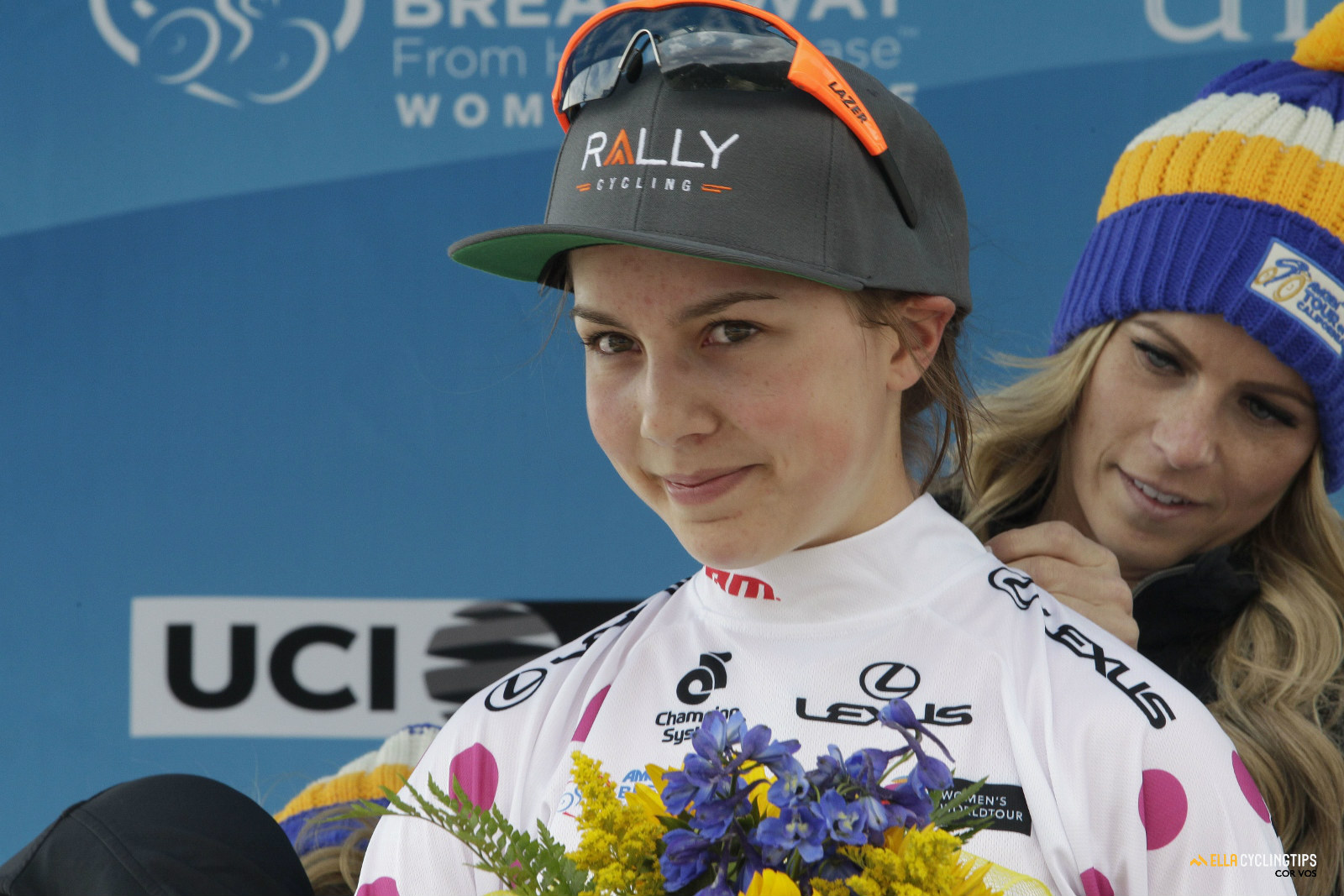 “SARA DEMONSTRATED LAST YEAR THAT SHE IS GROWING INTO A TOP-LEVEL PROFESSIONAL. SHE’LL BE AN EXCITING ONE TO WATCH.”

A second year rider on the Rally women’s squad, Sara Poidevin had a breakout season last year. Most notably, the then 19-year-old won the climber’s jersey at Redlands Bicycle Classic before marking her spot among the world’s best when she won the Queen of the Mountains jersey after the first stage of the women’s Tour of California, a UCI Women’s WorldTour event.

The team unfortunately crashed out of the team time trial in stage two, ending their Tour of California campaign. Returning this year with unfinished businesses, Poidevin will be one to watch. 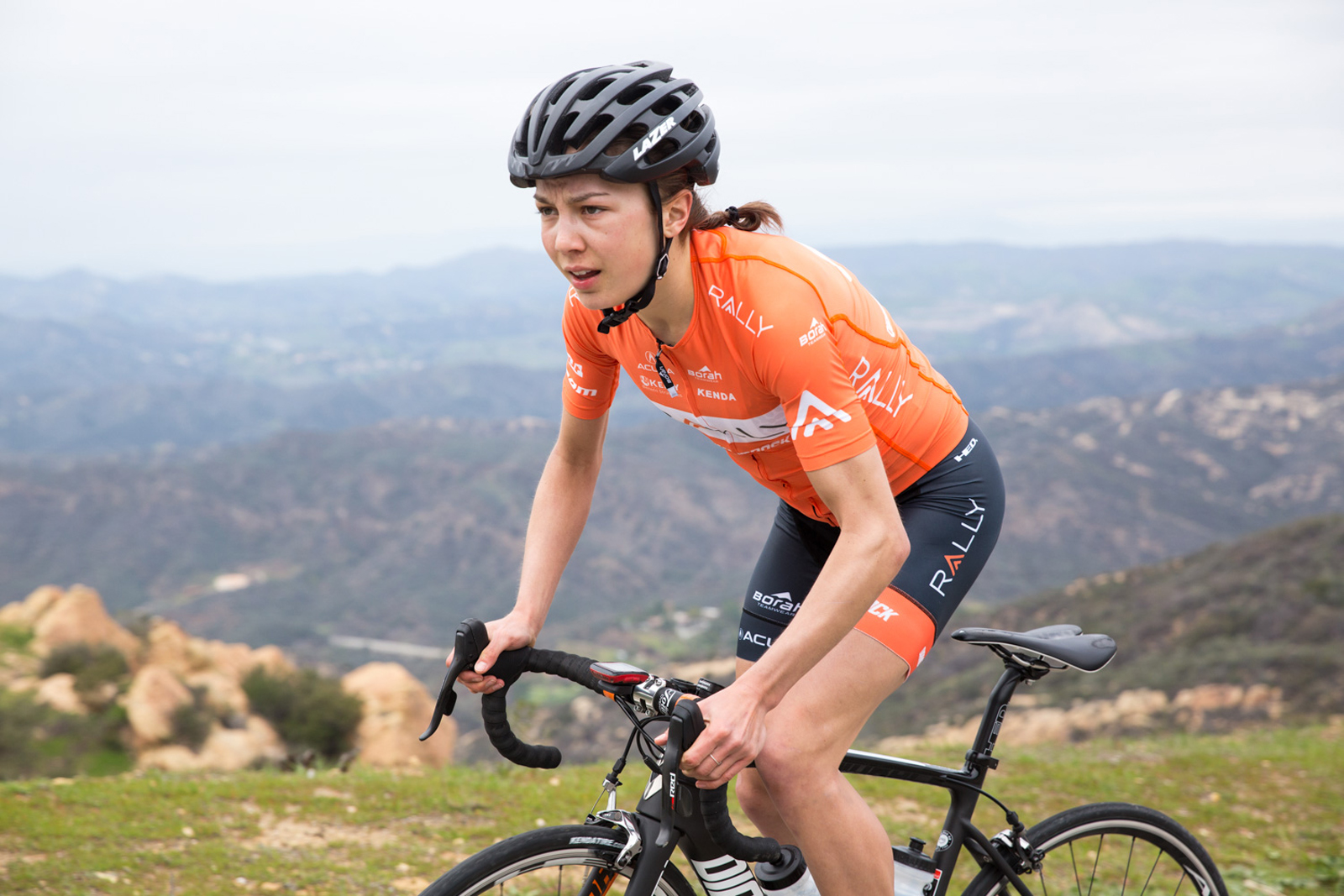 A Season of Firsts

The 2016 season was a year of firsts for the young Canadian. It was her first season as an elite rider, her first time lining up at the biggest races in North America and the first time on a world-class podium.

“Going into the season I didn’t expect to be as competitive as I was,” Poidevin said at the Rally team camp. “Every race I did was new to me and I am learning how to be a strong teammate and set our team up for the goals we want to achieve.”

The Redlands Bicycle Classic was a pivotal moment for the Poidevin, who started realising the potential others already saw in her.

“Going in I was really nervous because my team knew that I could be in contention for the climber’s jersey,” Poidevin recalled. “I really wanted to get the jersey for my team but I didn’t know how it was going to go. I think over the course of the stage race I gained a lot of confidence and learned a lot. It felt really good to accomplish that goal and come together as a team.”

Poidevin won the climber’s jersey ahead of world-class cyclists like Mara Abbott and Kristin Armstrong.

Later that season we’d see her in the polka dot jersey again at the women’s Tour of California and winning the young rider classification at the Cascade Cycling Classic.

“Sara demonstrated last year that she is growing into a top-level professional,” commented team director, Zach Bell. “She’ll be an exciting one to watch this year.”

What all this amounts to is more confidence and bigger goals.

“I am more confident now in my own abilities,” said Poidevin. “I have a better idea of what to expect at the races,  what other riders are like and the confidence that I can be competitive in the races and be a strong teammate to help set our team up for the goals we want to achieve.”

And she is in good company to succeed. The 2017 Rally women’s team sports a lot of talent and an impressive amount of Olympic, national, Pan American and World Champion titles.

“It’d definitely inspiring,” said Poidevin, admitting that she hopes to represent her country at the world championships someday.

It’s been a pretty wild ride since Poidevin decided she might give road cycling a go. Growing up in Canmore, Alberta, Poidevin started out mountain biking and commuting to school every day. It wasn’t until 2013 that Poidevin decided to try road racing.

“It wasn’t until my first year as U23 that I became more focused on racing and was able to have a good enough season to get on Rally,” Poidevin said. “I never thought I was going to be a competitive road cyclist. I thought I’d go straight to college and then onto medical school. It’s very different now…”

By working on her undergrad, Poidevin is keeping the doors to a medical career open, but her dreams now involve pink and polka dot jerseys instead of scrubs.

While spending 15 to 25 hours on training and racing each week, Poidevin is a Kinesiology student at the University of Calgary, which conveniently is also home to the Calgary Cycling Centre.

“I’m taking advantage of the opportunities I am given right now while I’m working on my undergrad and it’s flexible. I think it’s good to have the balance of school and training,” said Poidevin. “My college experience may be different than most, but it’s all I’ve known.”

“Balancing school and training can be tough,” Poidevin continued. “But it also keeps me focused and driven.”

Her ultimate goal? “To race for a WorldTour team, and to race the Giro Rosa.”

QUICK FIRE ROUND OF QUESTIONS

Question: Balancing training, school and a social life must be tough. Where does your motivation come from?

Sara Poidevin: “I love just being on my bike and pushing myself. And anytime you see yourself improve, it gives you confidence and so it’s really just a love of the sport and how much I love racing. It also comes from knowing I have my family and friends who support me, and the supportive team environment at Rally has been very encouraging.”

Q: Riding or racing? Which do you love more?

Poidevin: “I think I love riding because I love being outside and seeing new places and the bike is a great place to do that…But then I also love racing because I love pushing myself and competing. When I’m riding I do think about racing, too. It’s what I get excited about. You know when you’re maxed out and so are the people around you and everyone is trying to find that little tiny bit extra…I love that feeling.”

Q: Would you rather win a World championship or an Olympic medal?

Poidevin: “Those are both pretty big titles. It would be amazing to win either one.”

Q: What is one thing you know now that you wish you’d know when you first started?

Poidevin: “I never knew that this could be a full time job or career.”

Thanks to CyclingTips and Anne-Marije Rook for the content.