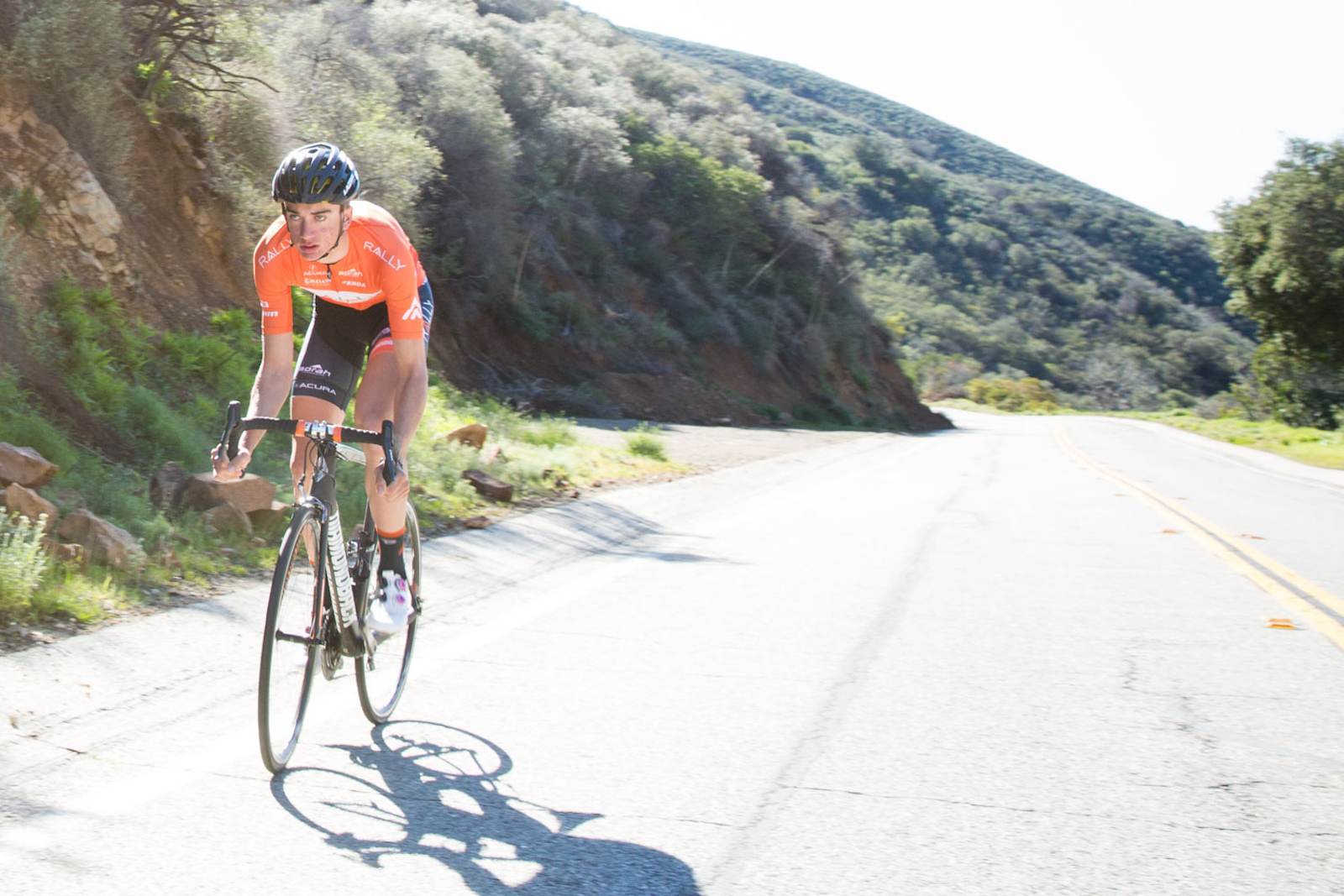 There are riders who grow into their talent after multiple years of hard racing and grinding training. And then, there’s Brandon McNulty.

Last season the 18-year-old from Phoenix, Arizona, won the junior world time trial championship to cap his successful career in the junior ranks. He’s best known for his results against the clock, but ask around a little and it becomes clear that he’s more than a TT machine.

For the coming season, McNulty’s chosen a slightly different path than many of his talented U23 peers. He’ll race for the U.S.-based Rally Cycling team, balanced with brief stints in Europe racing in stars and stripes with the USA Cycling national team. The move reflects a slow-build approach to his career, influenced by Roy Knickman, his Lux development team director. And for Rally team manager Jonas Carney, it reflects a return to his team’s roots as a training ground for young talent.

A story from McNulty’s first race in Europe in 2015 hints at his potential. He’d traveled to the Czech Republic to ride the junior Peace Race in the Czech Republic with the U.S. national team. Riding his first ever race day in Europe, McNulty threaded through the final kilometer traffic to finish third in the sprint. As Knickman tells the story, at one point, McNulty’s rear wheel was off the ground as he dodged the inevitable crashes.

Knickman’s takeaway from that opening stage: “He can race in a 160-man field with no experience and position for the sprint in the rain in the Czech Republic.” It was an unusually impressive debut. On the following stage, McNulty won the time trial stage by 30 seconds ahead of  compatriot Adrien Costa and took the race lead. While Costa won the final road stage, McNulty held on to win the overall. 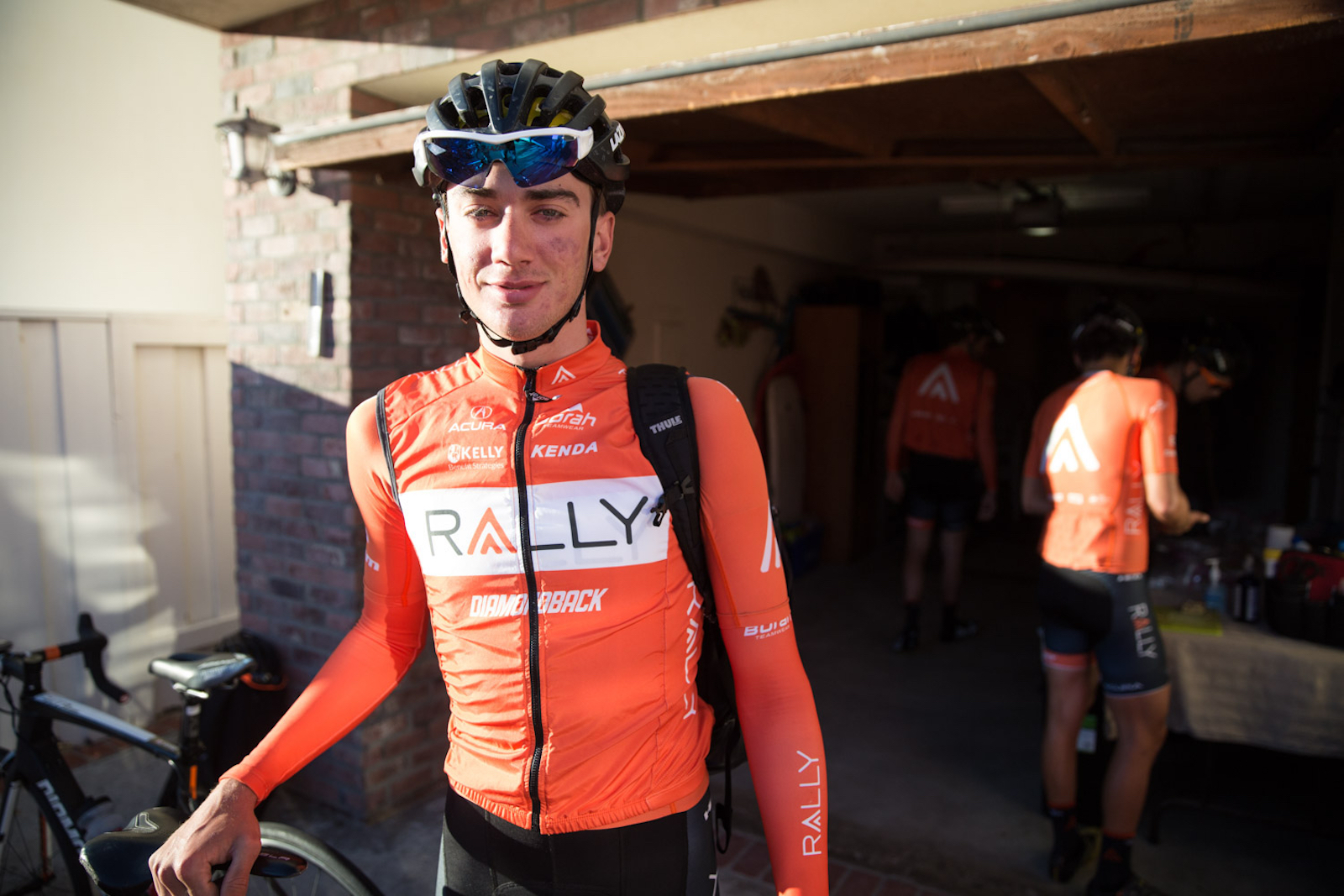 According to Knickman — who raced professionally during the 1980s and 90s with La Vie Claire, 7-Eleven, Coors Light, and Mercury — McNulty has pulled similarly impressive moves throughout his time as a junior. “When it’s race time, he makes very good decisions without being told,” he said. Knickman describes him as a very calm racer, who can make quick decisions on the road.

At the 2015 Valley of the Sun stage race, for example, a breakaway went up the road and ran up the clock. McNulty stayed relaxed, sat in, and asked his team to get him to the bottom of the climb. “He kept his cool and he rode flat out,” recalls Knickman. “We hadn’t even talked about it.” By the end of the stage, McNulty had ridden the field off his wheel and defended his race lead.

McNulty is as chilled out off the bike as he is on it. After casually riding the field off his wheel, he and Knickman’s son, Bo, borrowed the car and headed to Walmart on the other side of Phoenix. And while that might sound like the start of a nefarious shenanigan, but it wasn’t. The two riders were on a quest for post-race cookies. “He’s much more relaxed than I ever was,” said Knickman.

With his junior results, McNulty could have headed straight to a European squad this year, but he said he ruled out relocating to Europe fairly early in the decision process, preferring to “ease into it.” Regardless of what team he chose, he knew he could travel to Europe with the U.S. national team for select races. “A lot of guys have really good junior years and go right over and they end up hating it,” he said.

Knickman knows all about that. Like McNulty, Knickman was a decorated junior rider who won multiple national titles and worlds medals. He went to Europe as a pro at 19, and discovered it was “too much, too quick.” He rode the Giro d’Italia at age 20. Though there’s little reason to think a rider like McNulty couldn’t handle WorldTour races at a young age, Knickman sees the long grind of a full season as a fast track to burn-out. “I was used up by the time I was 25,” Knickman said.

Rally offered McNulty the chance to learn from veteran riders such as Danny Pate and Brad Huff, while still having opportunities to race in Europe. He saw a potential disadvantage to racing with his close friends at Axeon, or heading to another development team. “What are you going to learn from guys your age? Here, there are guys who’ve been racing for longer than I’ve been alive,” he said. McNulty added that both Knickman and his coach, Barnie King, are longtime friends with Carney, Rally’s team manager. 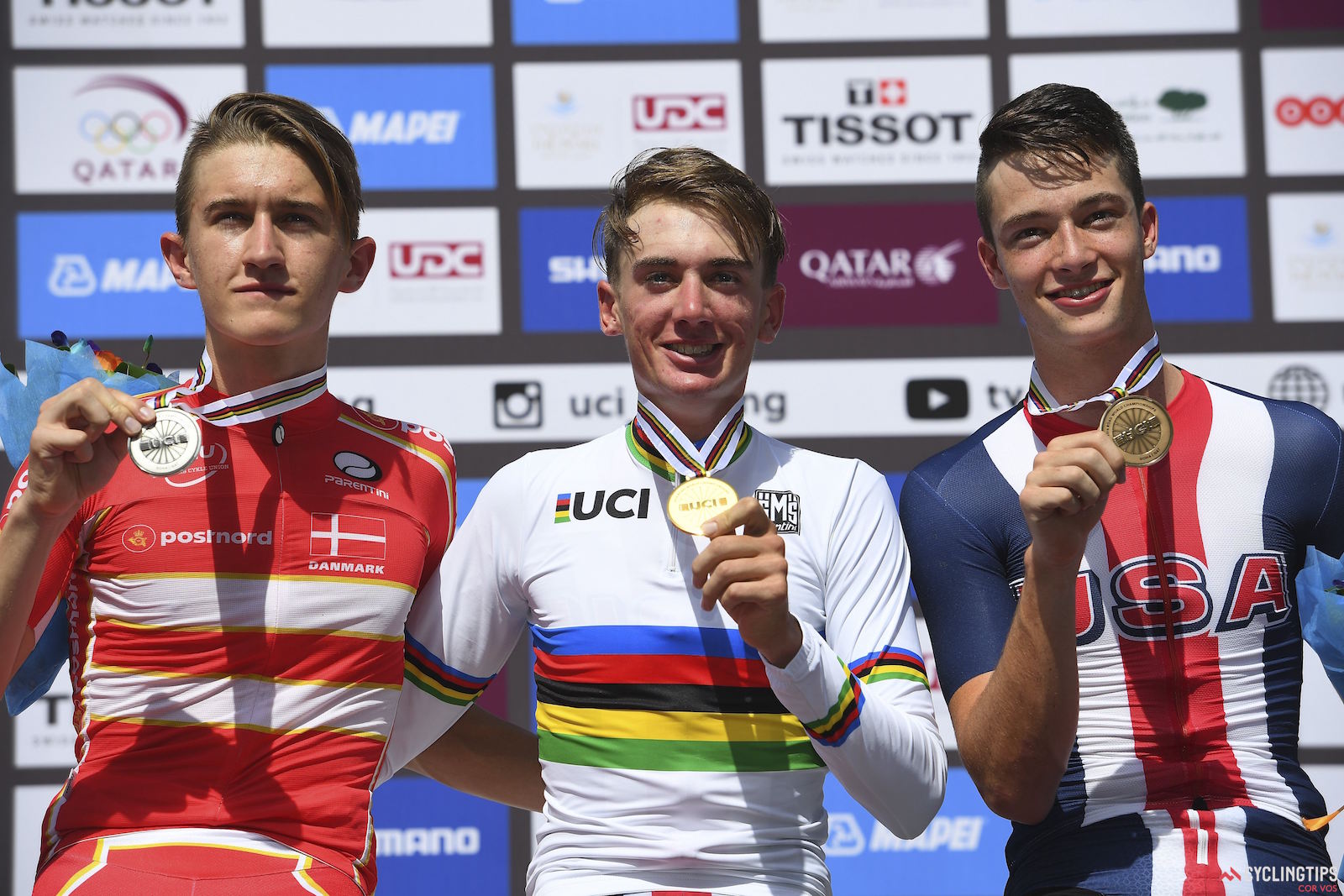 For Carney, working with a rider like McNulty is a return to his team’s origins. When the program began a decade ago as Kelly Benefit Strategies, he focused on recruiting younger riders. “We’re starting to pivot toward being a younger team and we want to start looking at the best U23 riders,” he said. “In the beginning we were looking at guys that were 18-20 years old,” pointing to Canadian David Veilleux, who went on to ride for Europcar, as one of his program’s early success stories.

What changed wasn’t the Rally’s goals so much as the U.S. cycling scene. A number of development-specific teams began hoovering up the most talented young riders. USA Cycling’s thriving U23 program also exerted a powerful gravitational pull. “We just didn’t have the opportunity to get the best U23 riders,” Carney said. Recruiting from the second or third tier U23 riders didn’t make sense. “Given that we’re gunning for things like the Tour of California, I don’t think we could provide a good program for those guys.”

With McNulty, there’s no fear that he won’t be able to keep up with his teammates. Though the majority of his results from the 2016 season were in junior races, he finished second overall at the San Dimas Stage Race, behind Janier Acevedo and ahead of supertalent Neilson Powless. More recently, McNulty showed no sign of stress during the team’s recent pre-season training camp in Oxnard, California.

Carney believes that Rally’s unique combination of youth and experience will give him a solid foundation. “We were all there, young guys, trying to make it and making mistakes and doing dumb stuff,” he said. Carney also knows there’s only so much he can do from the team car to help a young rider learn. He credits help on the road from riders like Knickman and Todd Gogulski with helping him start his own career. “It’s just really valuable to have those older riders around on the bike in the race to help you out.”

McNulty’s ace card is his time-trial talent. Knickman said McNulty can push more than 400 watts for a 30-minute effort — and he can go above that for shorter efforts, say to bridge up to a breakaway or to lap the field at a criterium. At six feet tall and 150 pounds, McNulty may never be a super climber, though he can push over the climbs, thanks to his engine. “I’m definitely an all-arounder,” McNulty said. “I’ve never been great at it, but I’ve always enjoyed sprinting with the guys in the the crits.” 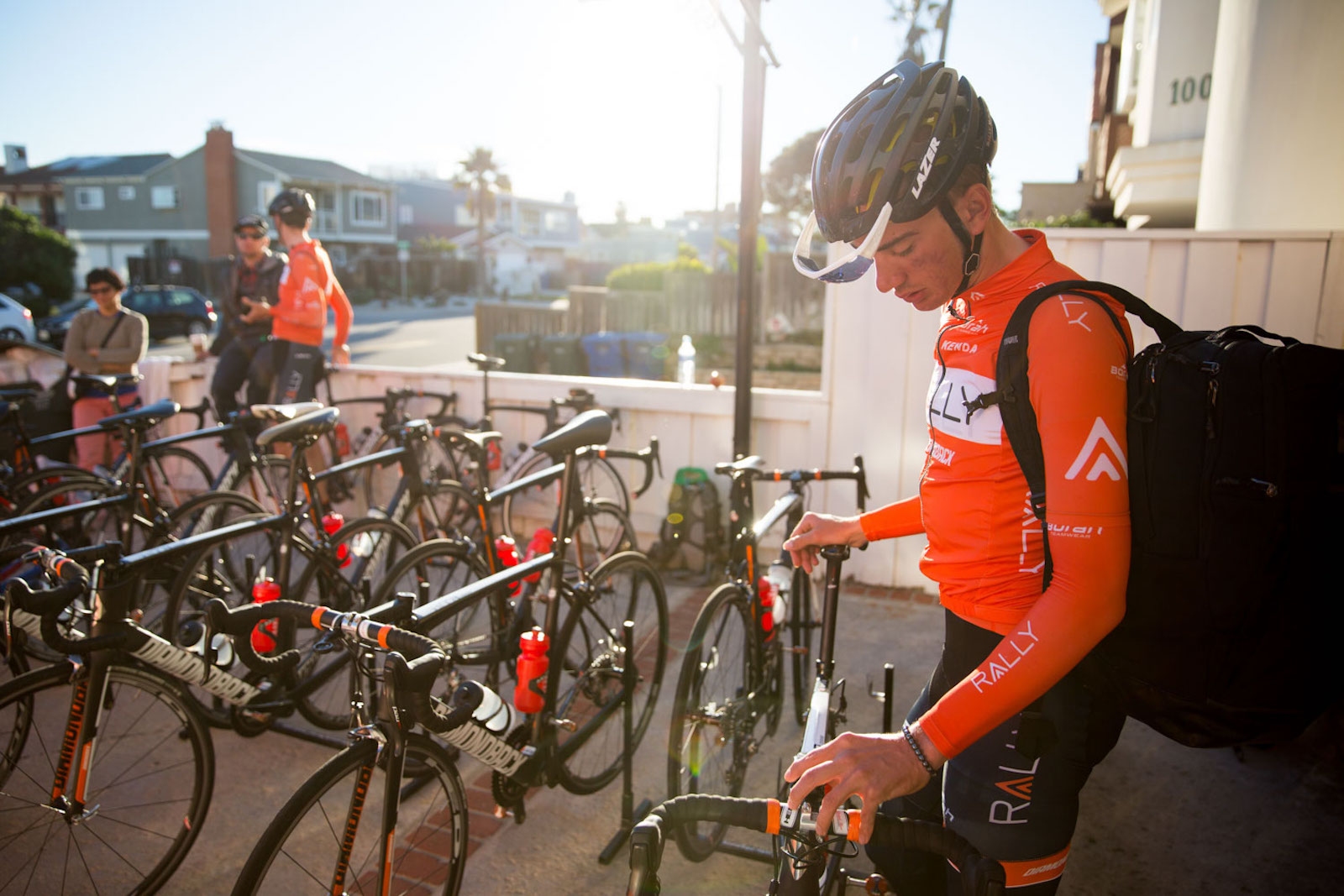 Carney expects that McNulty will surprise this season. “I think a lot of people don’t know how well-rounded he is as a rider, that he can climb and that he can actually kind of sprint as well,” said Carney. “He’s not just a time-trial guy. He knows how to race his bike.”

In the long run, McNulty sees himself most likely following the path of the hardmen of the sport, and looks up to the careers of riders such as Tony Martin, Fabian Cancellara, and Jens Voigt. He’s equally happy riding for himself or for a teammate. “I’ve never liked sitting in,” he said. “I’ve always liked going to the front and going hard.” He plans to race a few of the U23 classics with the national team this spring to test out the hardman’s events.

For the 2017 season, McNulty has made the U23 world time trial championship his principal goal. His winning time in Doha last year was 34 seconds behind the winning time of U23 winner Marco Matthis. McNulty was also using junior gears for his ride, suggesting that a winning time is well within reach.

After a trip to Europe with Rally and the national team, he’ll race the U.S. calendar through the Redlands Cycling Classic, in May. “If I’m still feeling good, we’ll try to at least consider [the Amgen Tour of California],” he said. “But if I’m just dead, then kind of rest and then obviously, U23 nationals.”

Though McNulty hopes to win the U23 national title, he views it more as a ticket to worlds than as an end in itself. And though his talent is obvious, McNulty said he’s still trying to figure what he does best. Over the course of his career, he knows he’ll be of more value to teams if he can do a little bit of everything, and the next year or two of his career will be dedicated to learning as much as possible.

“Obviously, there’s the big races, the classics, it would be fun to win one of those or the Tour de France,” he said. Not surprisingly, he hasn’t looked too far ahead. His friends from high school are on Facebook talking about balancing school and jobs. “I’m getting paid to ride my bike,” he said happily. “I just like racing.” 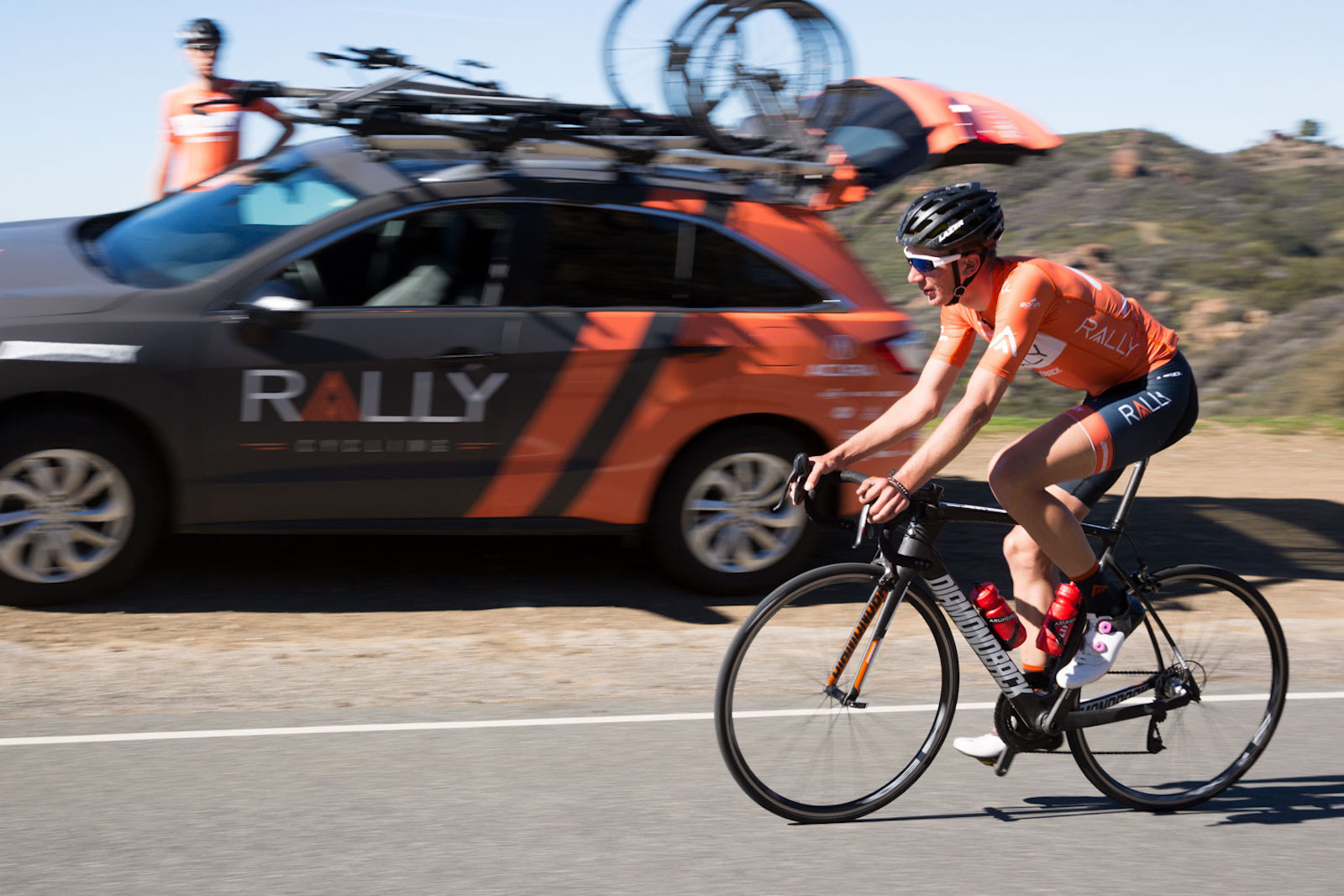 Thanks to Cycling Tips and Jen See for the content.