Rally Cycling had a stellar 2017 national championship season. Between American and Canadian titles, they racked up eight, with an additional eight podiums. Here’s a recap of their success. 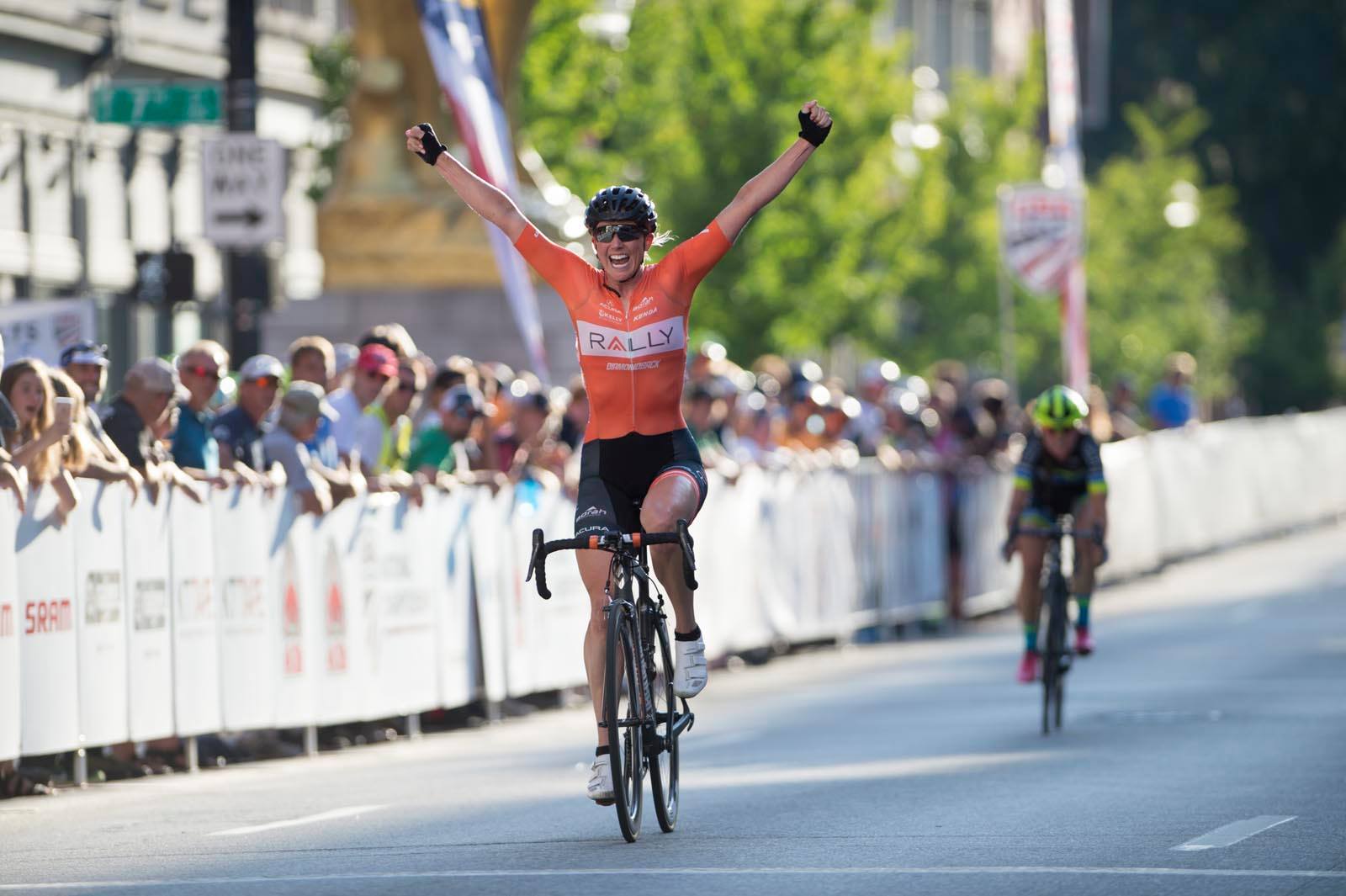 “This title is quite special," said Allar. “It's my first Elite criterium championship. I wouldn't have guessed that it would have been from a breakaway, but am so pleased. Lauren (Stephens) has been riding very well so to find myself off the front with her with 18 laps to go was not something we had expected. I knew if I rode it well, played it smart, I could win the sprint. I cannot wait to line up in the Rally Cycling National Championship kit. It's been a long time coming and such an honor to wear the stars and stripes.”

Rally Cycling dominated the race with Amy Benner covering the first couple of moves before Erica Allar, and Lauren Stephens (TIBCO-Silicon Valley Bank) rode away from the peloton. The duo quickly established a 20-second gap. With Allar out front, Benner, White, Megan Heath, Caitlin Laroche and Monica Volk took up position at the front of the race. The only rider to escape the grasp of the Rally Cycling led pack was Irena Ossola (SAS-MACOGEP) who spent most of the race chasing the lead duo alone.

A crash with five laps to go resulted in turmoil and neutralization of the race. After letting the legs cool, the riders restarted facing a brutal five lap sprint to the line. Allar and Stephens wasted little time and expanded their lead to 45 seconds with just three laps to go. Knowing the power of Allar’s finishing kick, Stephens refused to pull through in the closing kilometers, and Allar dropped the pace. The game of cat and mouse allowed Ossola to catch them on the final lap, and she wasted no time in launching a strong counterattack. Allar was quick to respond and was able to use the move to launch her sprint and take the stars and stripes. 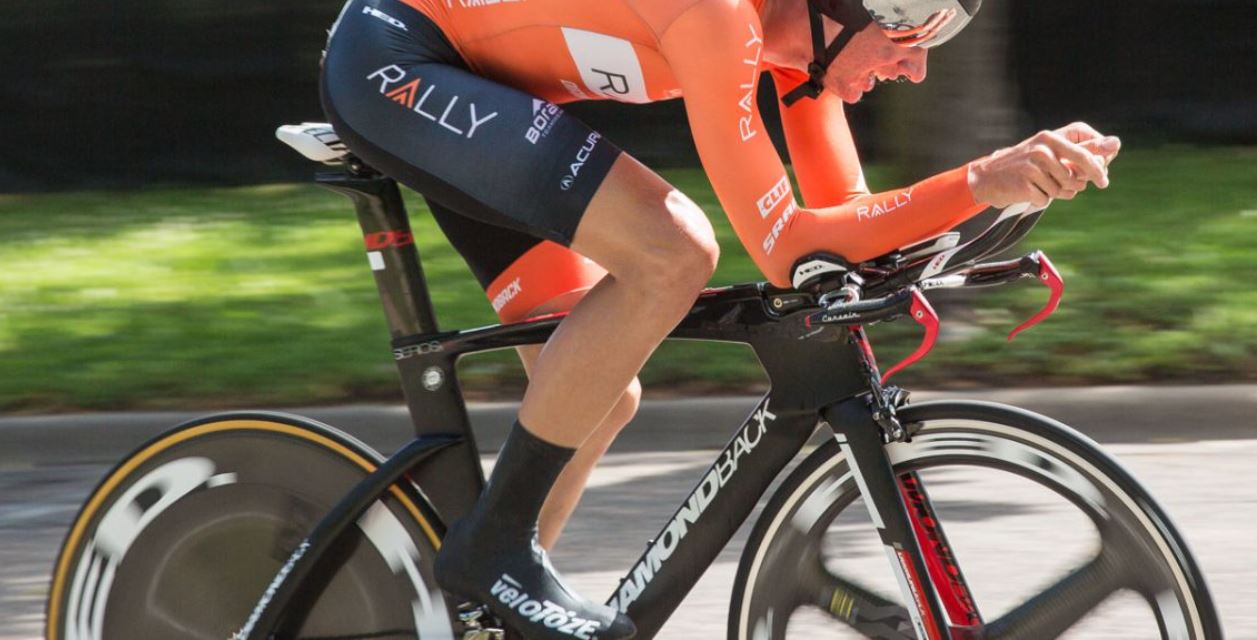 2016 Junior World Time Trial Champion Brandon McNulty won his first Under-23 US National Championship title today, besting the competition with a time of 41:44 on the 34 km course around Taylorsville Lake State Park, KY. McNulty’s win showed grit and toughness after illness hindered his performance in last week’s US TT National Championships, and was another sign that the young talent is here to stay.

The Under-23 field today included the powerful Axeon Hagens Berman duo of Neilson Powless and William Barta, who finished 3rd and 4th in the Elite time trial event over the previous weekend. McNulty meanwhile struggled to a 22nd place result, feeling the effects of an illness which began toward the end of the North Star Grand Prix.

The wishbone course around Taylorsville Lake featured over 1800 feet of elevation gain and constant rolling terrain, requiring riders to deliver constant power to the pedals. Barta set a new standard when he crossed the line in 41:56 with Powless and McNulty still out on course. The bronze medalist from last weekend came up just short of Barta, 12 seconds in arrears. McNulty meanwhile was proving out on the course that he had overcome his illness, eclipsing Barta at the mid-race time check. After the finish, Brandon’s time stood fast and he claimed his first U-23 Championship with 12 seconds to spare.

Asked how it felt to lay down a winning performance today following his earlier setback, McNulty replied, “It felt great! I knew that if my body was able to come around for today I would have a solid shot at the win. I also knew my form was good coming off of some big efforts at the North Star Grand Prix, and everything just came together today. I’m very happy to take home the jersey and continue to bring home national titles for Rally Cycling.” 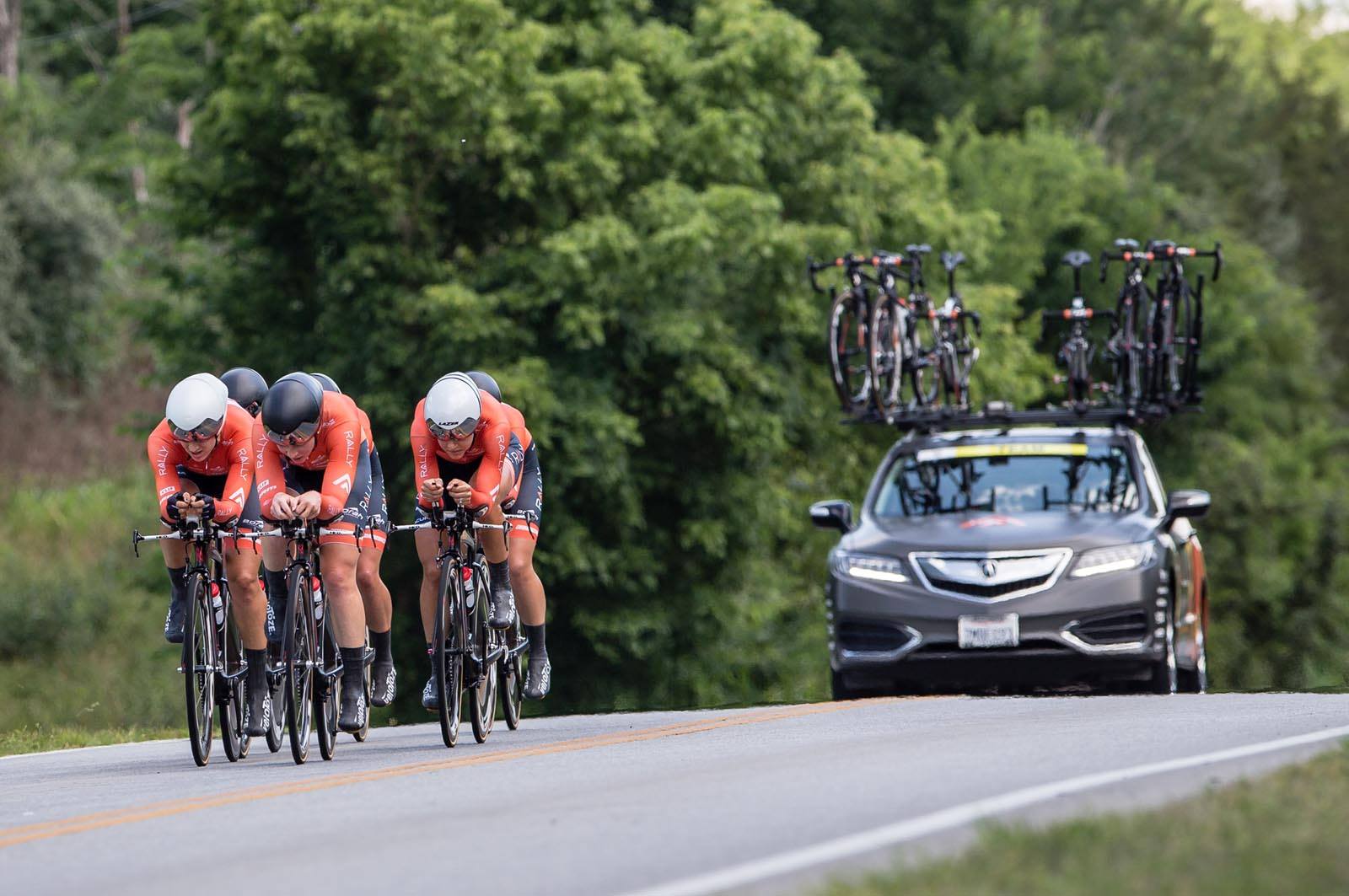 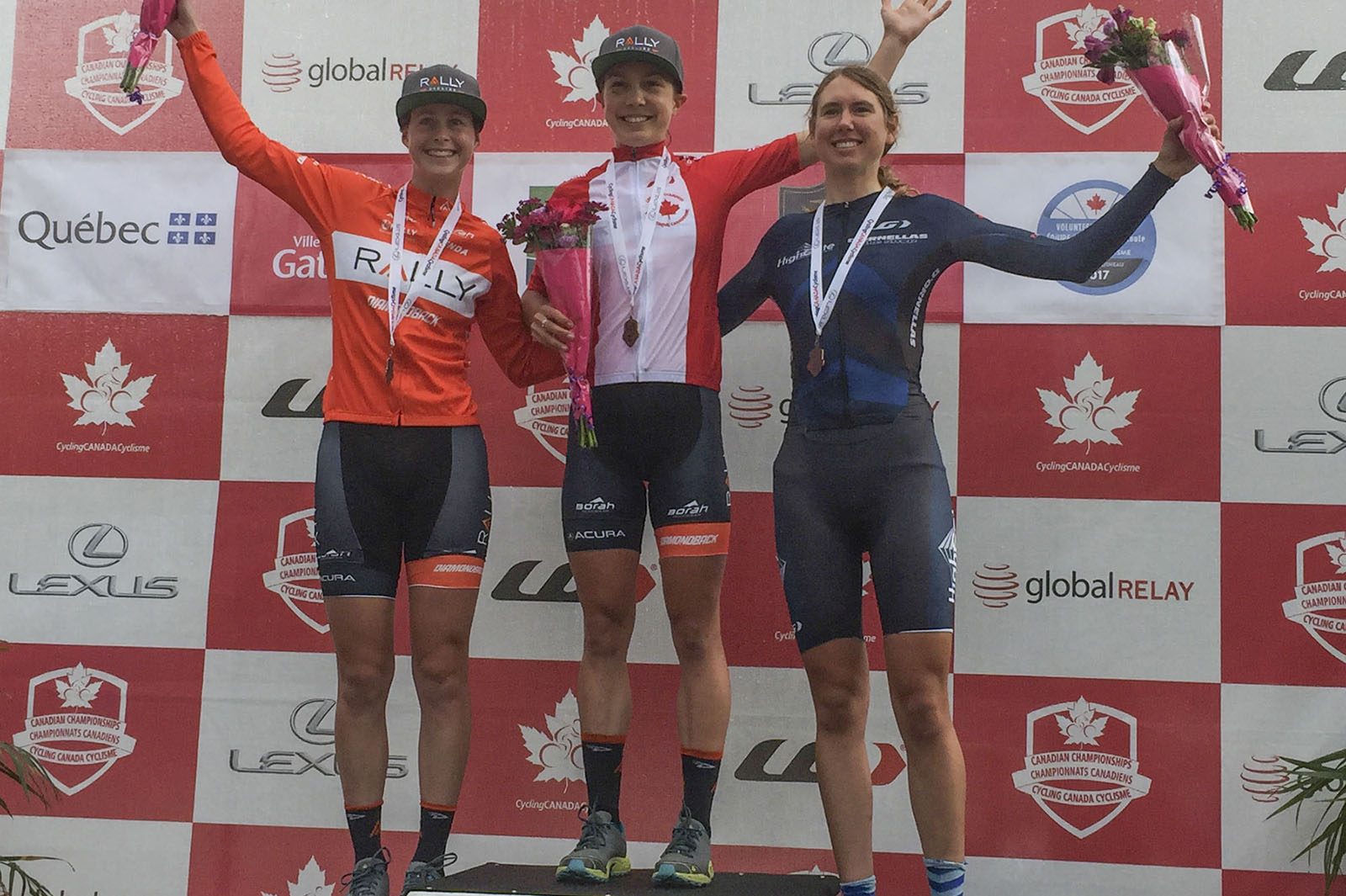 Sara Poidevin charged over the hilly terrain of Gatineau Park in Quebec to win the U-23 Canadian time trial title. Poidevin flew around the 26-kilometer course in a blistering time of 40:01 to claim her first maple leaf jersey. In addition to taking the U-23 title, Poidevin finished third in the Elite category with Kirsti Lay just off the podium in fourth. Katherine Maine finished eighth, second in the U-23 category, with Sara Bergen in tenth.

"I always look forward to racing Canadian Road Nationals, and this year, I was proud to represent Rally Cycling at the event again,” said Poidevin. “Last year I finished with two second-place finishes in the U23 category so to get the jersey is a great feeling. I felt good out on course but was surprised to finish so high in the Elite category. It was incredible to share the podium with Katherine and it made the award ceremony extra special.” 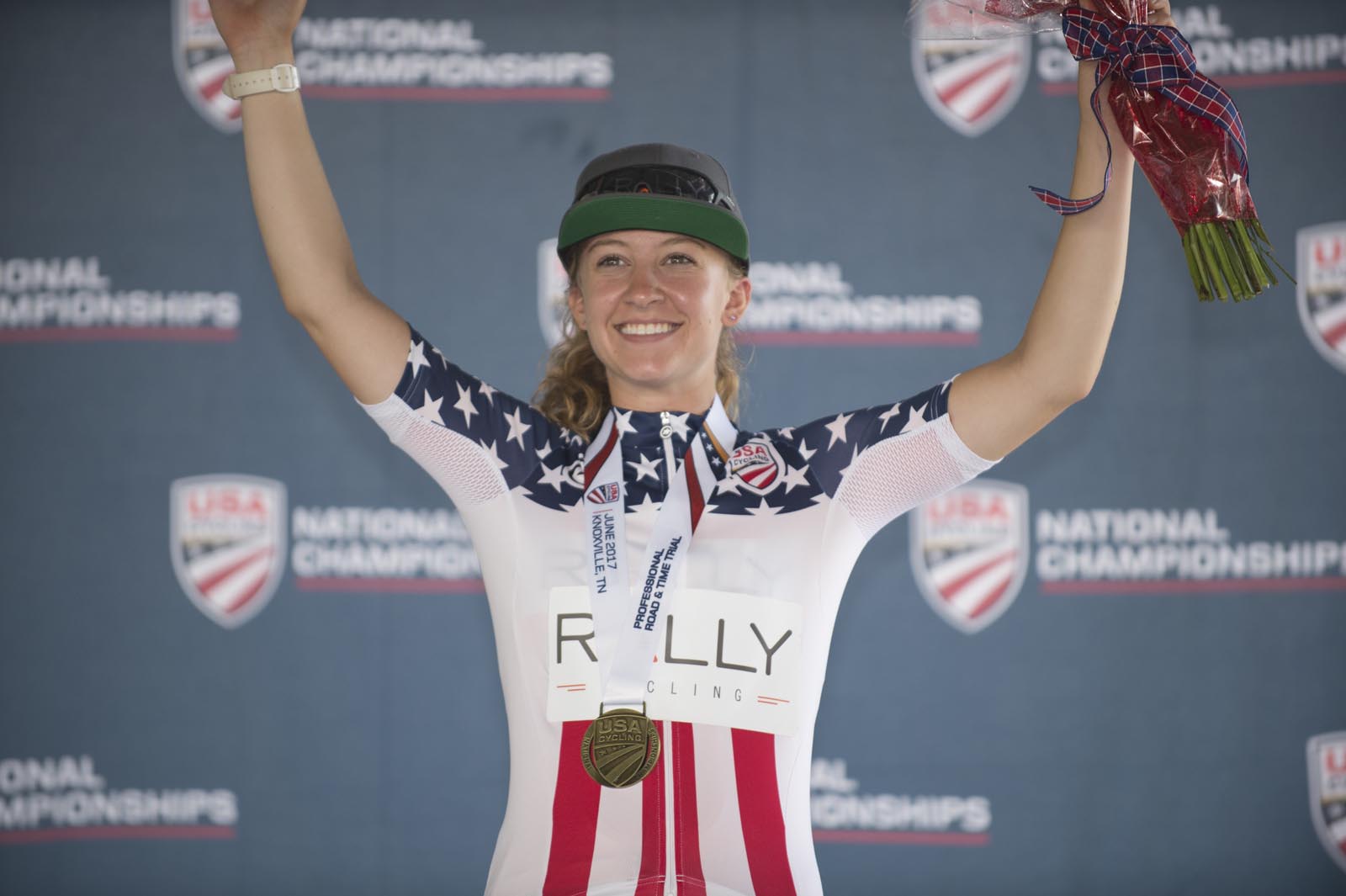 White made the elite selection on the final lap, and as the only U-23 rider in the group, locked up her second national title in two days. Not satisfied with the U-23 title, White was aggressive as she took aim at the overall win. However, World Time Trial Champion and Elite National Time Trial Champion, Amber Neben (Team Velo Concept) escaped in the closing kilometers to win solo. White would cross the line fifth on the day, but once again held the top spot on the U-23 podium.

“Before the start of the race, my goals were set a bit higher than winning the U-23 title,” said White. “However, this is my first U-23 national championships so take to both the road and time trial is a great feeling. I'm proud of all the work that the team has done to get me here. The last couple of weeks have been incredible.” 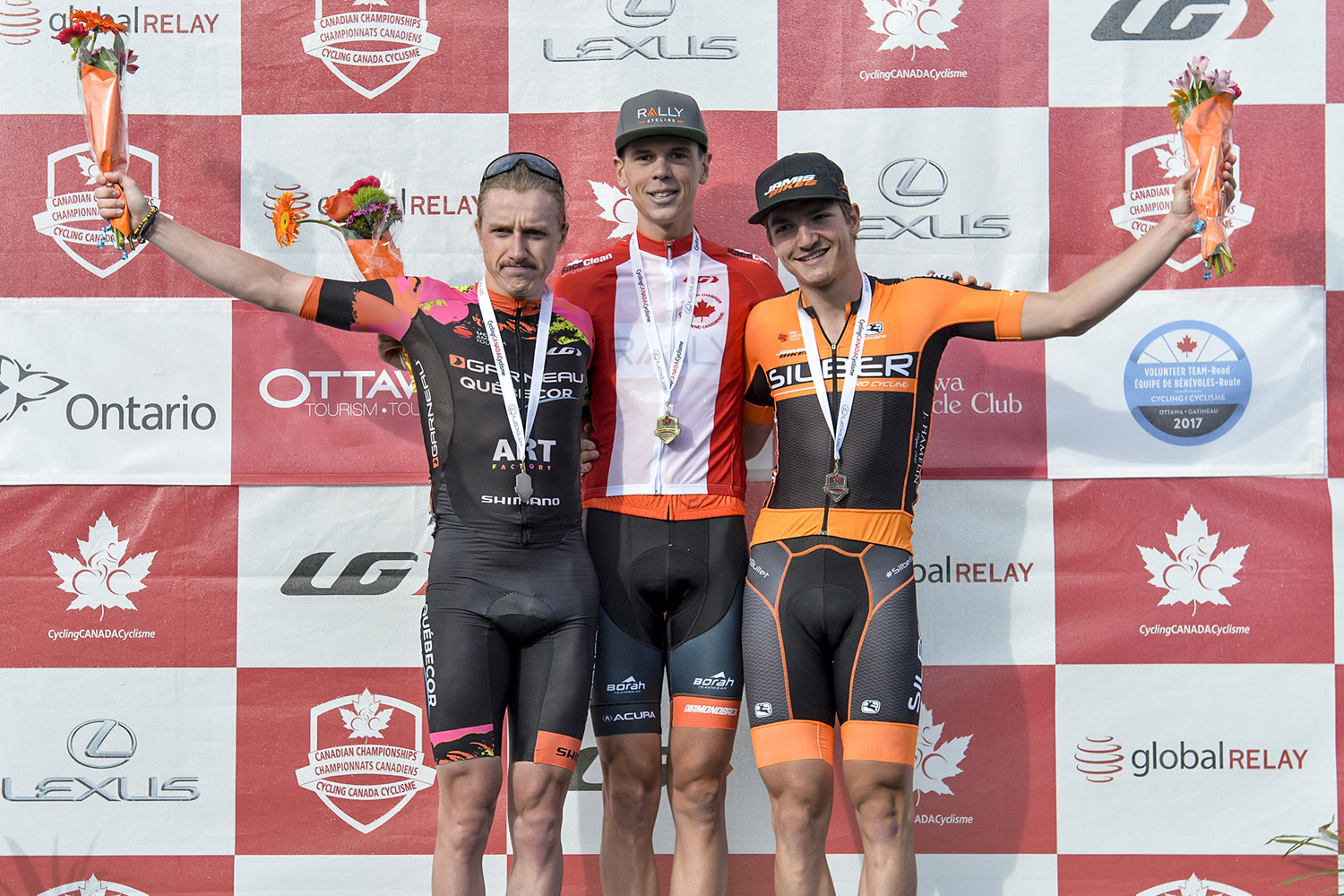 “This year I decided not to be so zealous, try not to force anything, follow some wheels and get up the road to play my part in the team’s plan,” said Dal-Cin. “The team did a good job of covering moves all day and was well represented in every break that went up the road. In the finale, I wasn’t super confident in my sprint, but I have been working on it for the past year, and it paid off. It was incredible to return the team’s hard work with a win.”

The men of Rally Cycling took to the streets of Ottawa, looking to match the thrilling performance of the women’s squad yesterday. Rob Britton, Matteo Dal-Cin, Adam de Vos, and Pierrick Naud proved up to the challenge against stacked rosters from Silber Pro Cycling, Garneau-Quebecor and WorldTour strongman Svein Tuft. The team was aggressive throughout the 160-kilometer race, forcing splits and reducing the field to a select few. As rain and lightning rolled in for the final kilometers, it was Dal-Cin who broke clear on the final lap with Marc-Antoine Soucy (Garneau-Quebecor). The duo outlasted the chasing group by just six seconds with Dal-Cin powering to an emphatic victory. 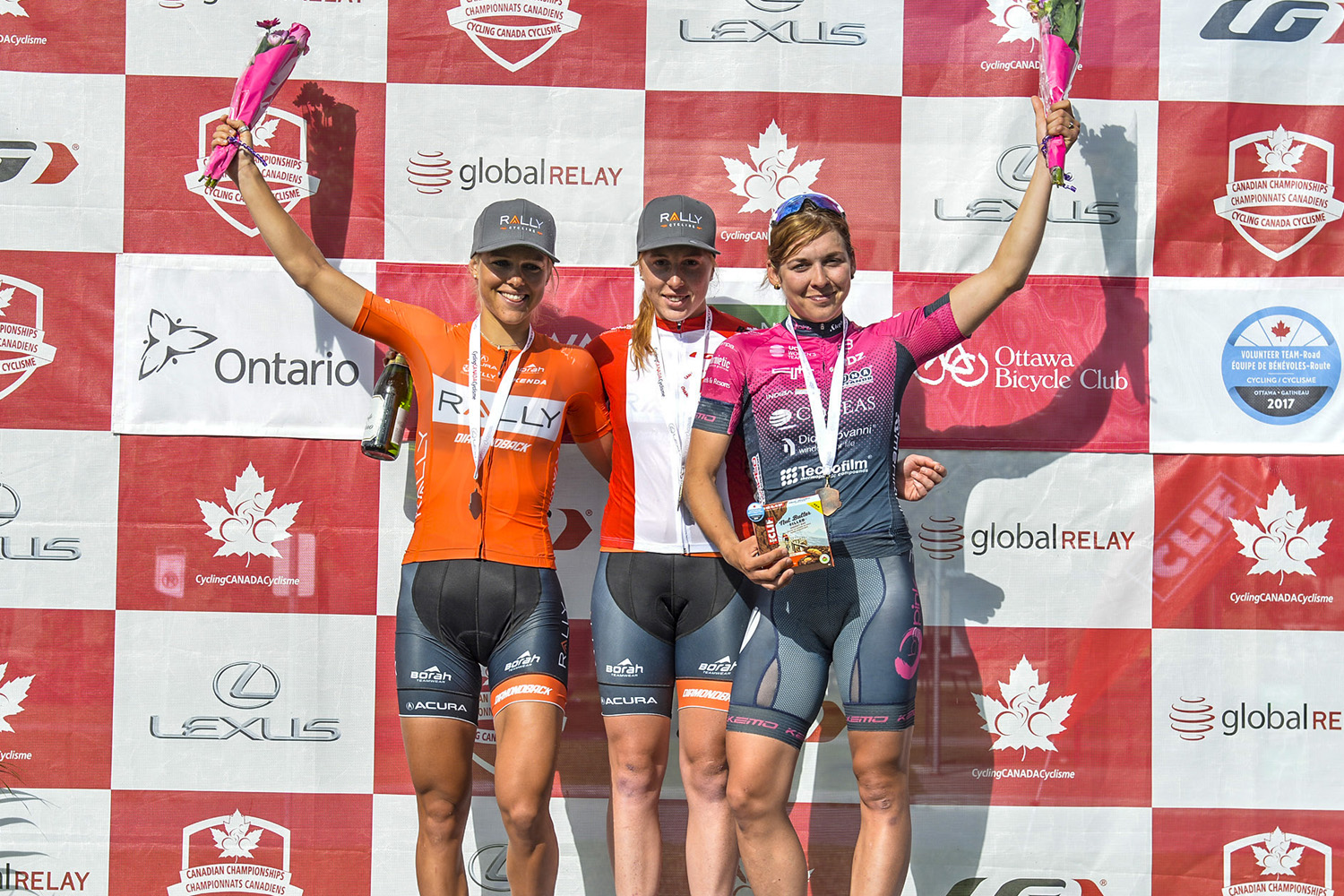 “Winning the road national title is not something I thought I would ever do, so it feels pretty special,” said Beveridge. “Once we had four riders in the break of ten, we knew we had to find a way to win. We put in some digs, but when it came down to a sprint, I just had to finish it off. Sara (Bergen) was out front all day. She made the early break and then attacked again late in the race. It was a big day out front for her and a couple of other girls, which allowed me to be conservative until the finish.”

The Canadian women of Rally Cycling began their championships, held for the second year in Ottawa, Ontario, with the 120km road race. Bergen set the stage for a dominating performance by Rally with a long solo effort that forced other teams to give chase. Steadily diminishing the field to just ten riders near the finish, the team placed four riders in the front group. Heading into the last of 12 laps on the Ottawa circuit, Bergen launched another solo move, requiring the other remaining riders to chase frantically. Bergen was brought back with less than five kilometers remaining, but it allowed her teammates a chance to organize and execute a flawless lead out in the finale. In the sprint for the line, Beveridge crossed several bike lengths clear of teammate Lay. Despite Bergen’s impressive day of work for her teammates, she still landed in fourth with Sara Poidevin in ninth. At the end of the day, Rally Cycling brought home gold and silver in the Elite category while Poidevin and Katherine Maine took home silver and bronze in the U-23 category. 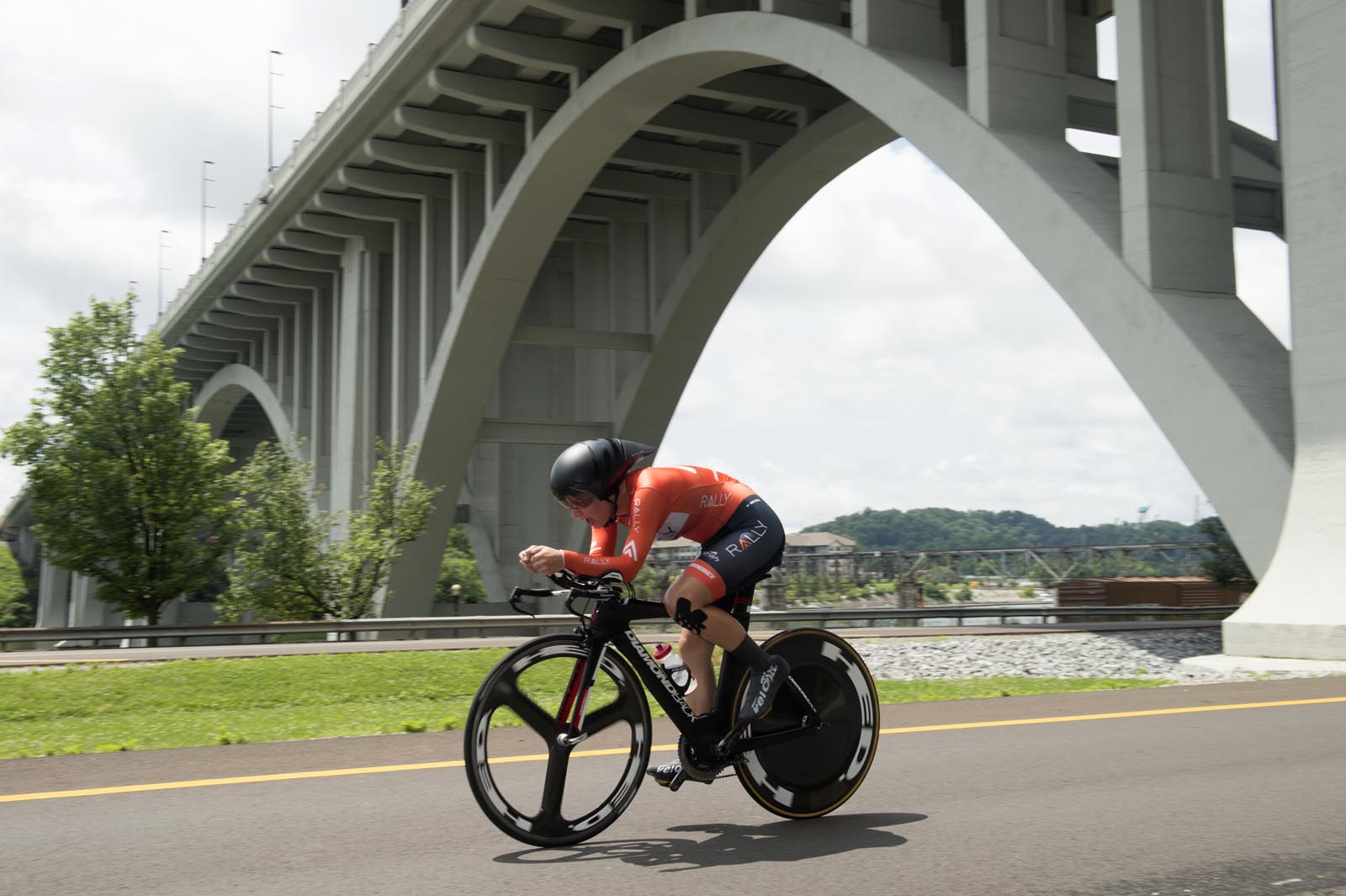 Emma White continued her incredible season by winning the U-23 time trial national tile in Knoxville, Tennessee. White, the recent winner of the North Star Grand Prix, flew around the course in a blistering time of 33:02 to claim her first senior individual stars and stripes jersey. White was the top placed rider from Rally Cycling in Tennessee with Evan Huffman and Brandon McNulty finishing 15th and 23rd in the men's event.