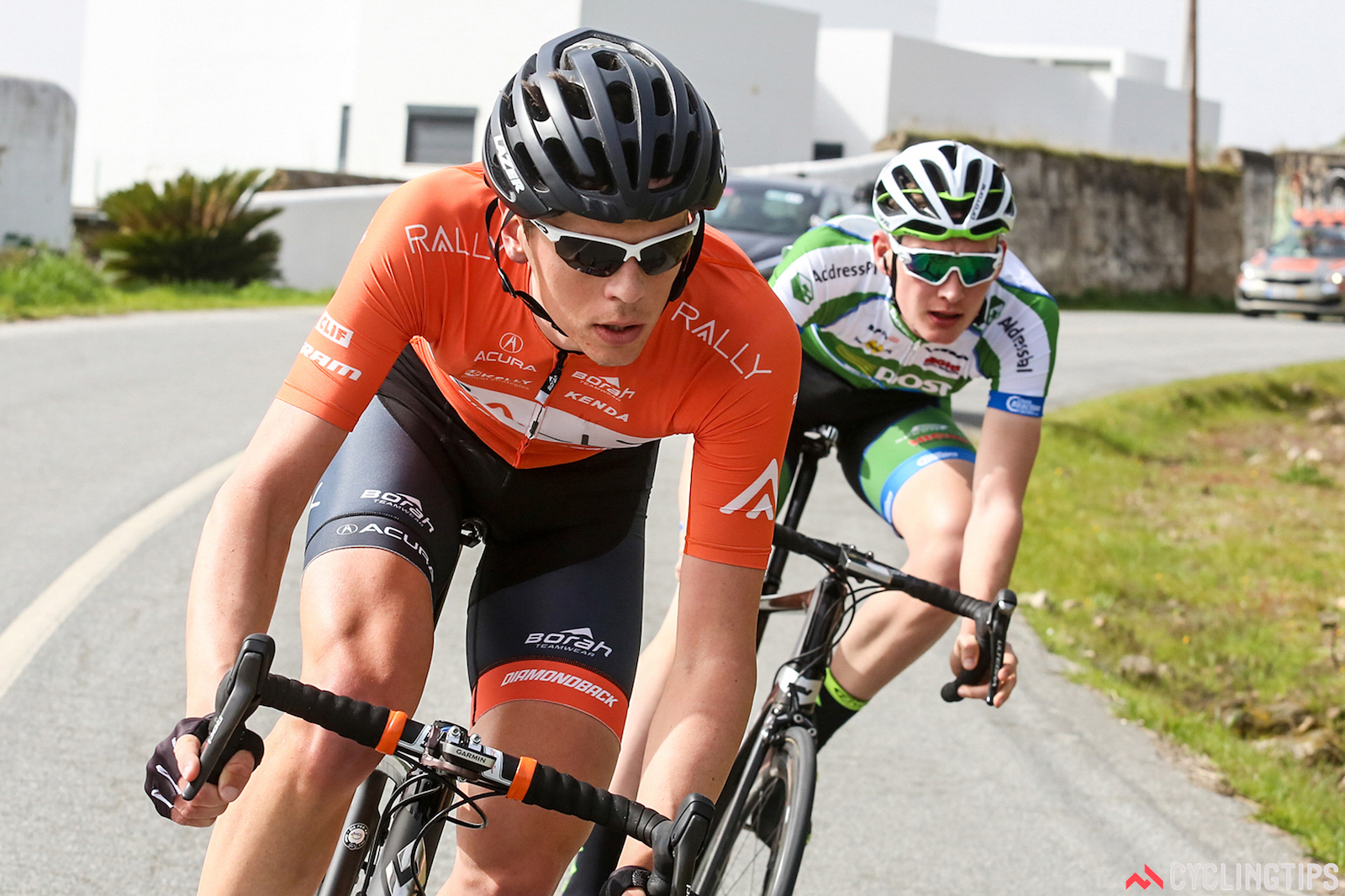 Matteo Dal-Cin is cooking dinner. “I’ve never cooked for 16 guys before,” he says, laughing. He’s in the kitchen at Rally Cycling’s rental house in Oxnard, California, for his first training camp with the team. Dal-Cin is cutting up vegetables and boiling water after training on picturesque roads above Malibu earlier that day. He’s more cheerful about the project than you might expect, thanks to fulfilling a long-standing career goal by signing with Rally for the 2017 season.

Last year was a breakout season for Dal-Cin. He won the overall at the Redlands Classic, while racing for the Canadian team, Silber. Though he’d won a Canadian UCI stage race, Coup de nations Ville Saguenay as an U23 rider, Redlands was his first high-profile elite victory. “I put together five good days in a row, which for me, was a first,” he said. Dal-Cin rode a careful tactical race where he sat in until the decisive climbing stage. “It was never like, I got this huge amount of leash and I just had to hold onto it,” he said. “I had to fight for all the time I got.”

He finished the season by joining a breakaway during the opening stage of the Larry H. Miller Tour of Utah. That move earned Dal-Cin the climber’s jersey and he spent the next few stages battling with UnitedHealthcare rider Daniel Jaramillo over that prize. Axeon Hagens Berman super talent Adrien Costa eventually overtook them both when the race hit the more difficult mountain stages. “It was fun while it lasted,” Dal-Cin recalled with characteristic good humor.

Though no one is likely to turn down podium time, Dal-Cin now says his early race exuberance at Tour of Utah might not have been the best idea ever. “I felt good at the start and I went in with guns a-blazing,” he said. The opening stages are considerably easier than the race’s later mountainous roads. “I was like, ‘Oh! This is why everybody conserved.’” Dal-Cin rode the gruppetto on Utah’s queen stage to Snowbird and didn’t finish the final difficult climbing stage around Park City.

With last season in the rearview, Dal-Cin is looking to become a better stage racer. The victory at Redlands whetted his appetite and raised his confidence. “I’d like to build on that shorter stage-race aspect and then for sure, test myself in the longer ones that we’re going to do,” he said. “Like five or six days, and see if I can hack it with the big boys for the whole time.” He looks to the experienced crew at Rally to help him make that next step in his career.

Joining the team was a long-term goal for Dal-Cin. “I think I applied a few times when I was maybe on a bike-shop team, definitely lacking the results to get on,” he said. “There’s always been a strong Canadian contingent, too.” Dal-Cin, 26, won a medal on the track in the team sprint at junior nationals in 2007 and had a second-place finish in the time trial at junior road nationals in 2009. He turned pro with Silber Pro Cycling in 2014. Last year’s Redlands victory caught the eye of  Rally manager Jonas Carney.

Along the way, Dal-Cin has worked part-time for his father’s construction company in Ottawa to fund his racing career. “In order to race, I had to foot the bills for it,” he said. Dal-Cin worked his construction job full-time each fall to build up money to make it through the season. The down-to-earth Canadian says he was lucky to have his father’s support. “With any other boss, it’s going to be like, ‘oh I’m leaving for three or four weeks during the summer,’ you’re going to lose your job,” he said.

After their January training camp, Rally traveled to Europe for a block of racing. Carney aims to strike a balance between giving his riders the opportunity to try European racing and winning races in the U.S. for the team sponsor. “There’s not much going on in the U.S. in February and March,” he said. “So we take advantage of the opportunity to race in Europe and get the guys the fitness and keep one foot in that pond over there.” 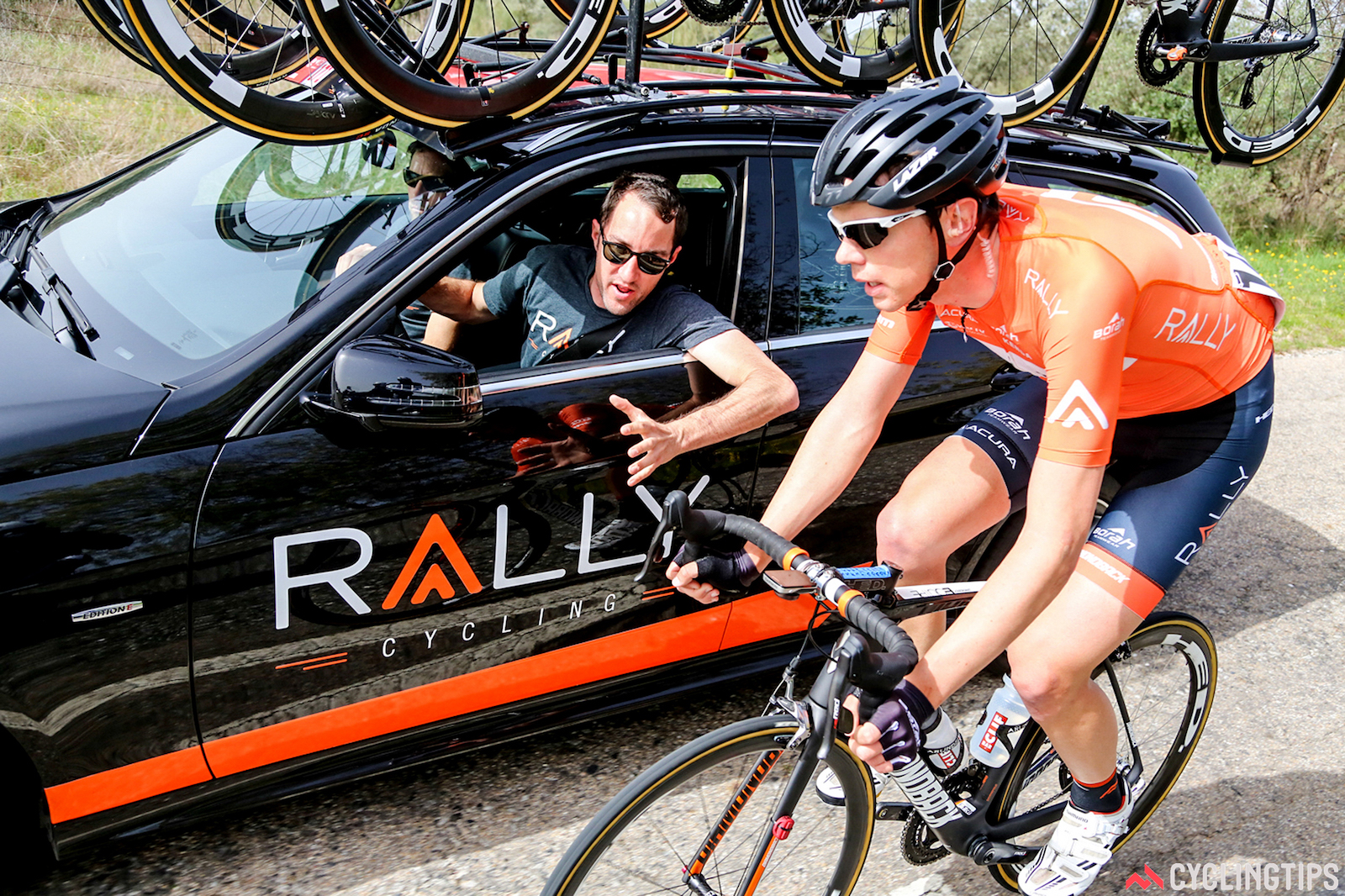 This time around the team rode Volta Algarve, Volta Alentejo, and Classica da Arrábida. For Dal-Cin, it was his first experience with the big fields and twisting roads that characterize European racing. “It’s been a real eye-opener as to just how good some of these guys are at racing and handling their bikes,” he said. “I think Algarve was far and away the biggest field I’ve ever been in.” He found the battles for position at the front more intense than he’d experienced in North American racing and described the roads with some understatement as “obstacle-laden.”

Despite the challenges, Dal-Cin managed to get into a two-man breakaway during the opening stage of Alentejo. The field controlled the gap throughout the day and held the pace steady. He and his breakaway companion were caught well out from the finish; the course finished with a series of climbs. “The racing hotted up quite early, so we never really had any kind of shot at winning the day,” he said.

Dal-Cin says he struggled with the first few races, but at Classica da Arrábida, a one-day race in Portugal, he joined a late attack with 30 kilometers to go. “It actually had a bit more chance to go for the win,” he said. Dal-Cin made it to the final climb out in front and survived solo until inside the final two kilometers. “It was nice to finally partake in the race,” he said. After gutting out his first few European races, he managed to grab some solo time on the final day of the trip.

At 26, Dal-Cin still has time to develop his talent and fill in the gaps in his experience. This first trip to Europe marked an effort to do just that. He called it a learning experience and is looking forward to more chances in the future. Ever humble, he says he has plenty to learn. “Certainly there is ample room for me to improve in all facets of the sport before I am competitive with these guys,” he said.

For now, he’s back in North America to hit the U.S. racing circuit. “I’ll be going to Tucson to continue training, because it’s not quite rideable outdoors back at home in Ottawa,” he said. From there he’ll travel to Fayetteville, Arkansas, to ride the Joe Martin Stage Race, the first UCI race in the U.S. for the team.

Dal-Cin will be looking to build on last year’s success at Redlands and hopefully pick up another stage race victory this season. But he’s also keeping it open-ended.“I don’t know if I have an objective goal, so much as what would be my own subjective opinion of how I do,” he said. “I don’t necessarily have to win as long as I feel like I’ve made improvements and I’ve been able to raise the quality of the racing I do.”

Thanks to CyclingTips and Jen See for the content.