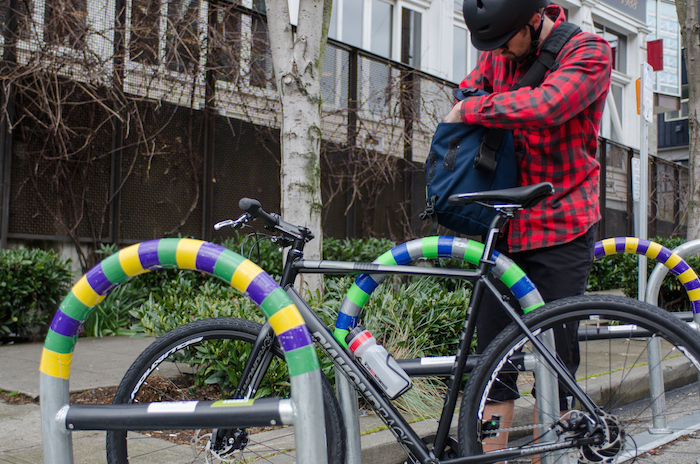 HOW TO LOCK IT

“A thief’s big concern is, ‘Can I sell this bike in 30 minutes?’” McGettigan says. “Thieves don’t want one that’s easily identifiable.” Write your initials at 12 o’clock and 6 o’clock on each tire with a Sharpie.­ Or pen your name on the top tube and cover it with layers of clear packing tape. A thief can remove it with some effort, but it probably won’t be worth the hassle.

Write your bike’s serial number in marker on paper and have someone photograph you displaying it next to your bike. Also take shots of identifying details and keep them stored in your phone. There’s no theft without proof of ownership. Have yours ready.

That Craigslist find might be a bargain, but it could be compromised or outdated.

WHERE TO LOCK IT

Talk to a local bike shop. The staff should be well versed on the amount of theft occurring in the neighborhood and may have some targeted advice about where (or where not) to lock up. Or check with a local advocacy organization.

Avoid stoops where people are hanging out, McGettigan says—loiterers may tip off thieves. Don’t lock at train stations; park a block away so no one will think you’re gone all day. Best case: well-lit areas with foot traffic, near buildings with video surveillance.

On Bike Shepherd, you can enter your bike’s serial number into a national database and buy three scannable, tamper-­resistant QR stickers for the frame. The idea is to make a would-be thief wonder if selling the bike will pose a hassle.