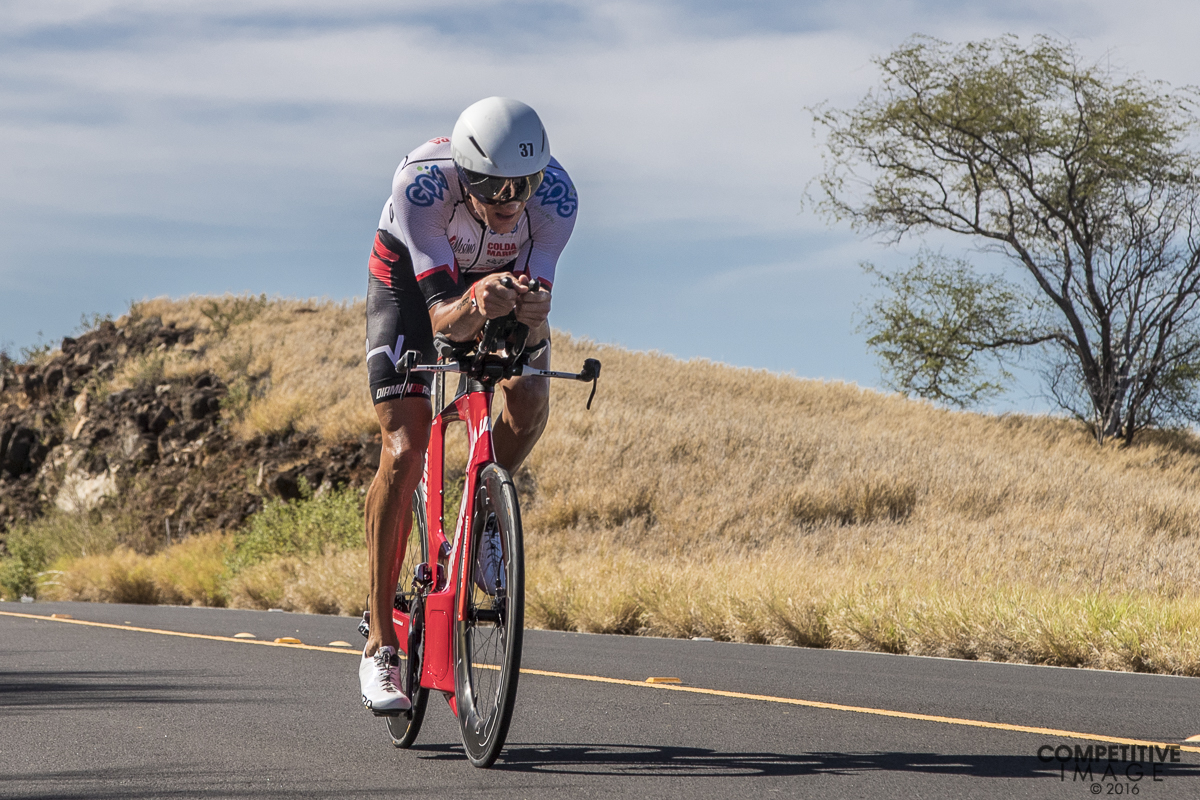 Time trials. They’re arguably the most polarizing aspect of bike racing. Some riders love the challenge of pacing their effort perfectly, while others detest the pain that TTs inevitably deliver.

If you do any racing yourself, and particularly multi-stage events, you’ll almost certainly come face-to-face with the occasional time trial. So what’s the best strategy when it comes to pacing your effort, to ensure you get the best out of yourself? And what effect does the course profile have on that pacing strategy?

In the following article Nick Squillari combines real-world experience with recent research findings to help give you a leg-up in your next race against the clock.

For anyone who has ridden a time trial — or even gone for a Strava KOM longer than half a mile or so — the concept of pacing your effort is nothing new. You know that increases and decreases in gradient, as well as the wind direction, all affect when you need to be putting the power down. Or do they? And if so, to what extent exactly?

Scientists Marc Wells and Simon Marwood, building on previous studies with both physical subjects and mathematical simulations, looked at the effects of variable versus consistent pacing on time trial performance. While the results themselves might not come as much of a shock to some, the finer details did uncover some surprises.

And, like all good studies, the real-world applications have the very real possibility of giving you that edge in your next time trial or Strava KOM-sniping session.

In their first study, Wells and Marwood took power outputs of 200-600 watts and either kept them constant or varied them by +/- 5, 10 or 15%, modelling completion times across completely flat time trials of between four and 40 kilometers. These simulations, based on mathematical models for road cycling power derived in 1998, were done in windless conditions with a rider weighing 70kg on a 10kg bike.

These simulations also took a ‘fast start’ into account — because no one rolls out of the start gate and settles on their functional threshold power (FTP) within 10 pedal strokes.

The researchers found that a consistent power output was superior to variable power in nearly every instance. Time differences were exacerbated with increasing TT lengths while smaller power fluctuations (5% versus 15%) produced a time closer to the fastest (constant power).

Interestingly, they found that variable power could be advantageous for a shorter length TT (4km) when coupled with a ‘fast start’, with track pursuit racing being the main application for this pacing strategy.

The second study built on the first and looked at variable power outputs in hilly time trial courses of 40km, investigating whether it was better to vary power output in sync with gradient changes or not. These results were compared to a simulation of the course at constant power, using the same power ranges of 200-600 watts and variations of +/- 5, 10 or 15%.

Gradients varied between 1, 3 and 6% and the climbs on the course were 2.5km long. The simulated rider weight and bike weight were the same as in the first study (70kg and 10kg). The course was again windless.

The researchers found that variable power not in conjunction with changes in gradient — but rather spaced at an even frequency along the course — was even more detrimental to time trial performance than variable power on a flat course. This effect was increasingly exacerbated the steeper the gradient became.

However, power that varied in sync with increases in gradient yielded faster times, with a 15% power increase at 6% gradient resulting in a course completion over three minutes faster than that of holding a constant power.

Here’s what we can glean from these two studies:

– The flatter the course, the smaller you want your power variations. Constant power is king, especially if wind is also a minor factor.

– On a hilly course, it is imperative that you increase your power in conjunction with increases with gradient. With shallower gradients it’s not as important. A 5% power increase, at 200W, yielded a 16.36 second gain on a gradient of 1% over 2.5km. However at 6% that 5% rise gained the rider nearly a minute and a half (78.42 seconds). As the gradient increases so does the rider’s need to up the power from baseline.

– It is imperative that you choose a power increase that is within the range you’re able to hold for the duration of the uphill. While performance is improved with increased power, going too hard and not being able to maintain a 20% power increase, for example, is ultimately more detrimental to your time than maintaining a 10% increase along the length of the uphill. In effect, constant power is again king.

– The frequency of variation in power needs to be taken into account. Each increase in power (assuming the rider is already pacing close to threshold) will decrease the rider’s anaerobic work capacity, and therefore the ability to hold a variable pacing strategy further into the course.

If only there were a way we could have a cycling environment that was windless, traffic-free, with constant rolling resistance and with virtual changes of gradient where our power-to-weight could be taken in to account. Enter Zwift.

The following test is nowhere near as rigorous as those done in the study, however a lap of the hilly 9km Zwift Watopia course shares a lot of the same constant variables as the simulation used in the study. So with that in mind the protocol I chose for a test of my own was:

The results were in line with what the studies predicted: my second lap was 16 seconds faster. Interestingly, my KOM time was 17 seconds faster in the second run (with variable pacing) off only a mild increase in power. There was some time given away between the top and the finish line, however 16 seconds would still be no small margin of victory in a time trial (not to mention the fact most time trials go for nearly twice that long).

Give it a try yourself. One lap at a constant power, one with your choice of +/- power. 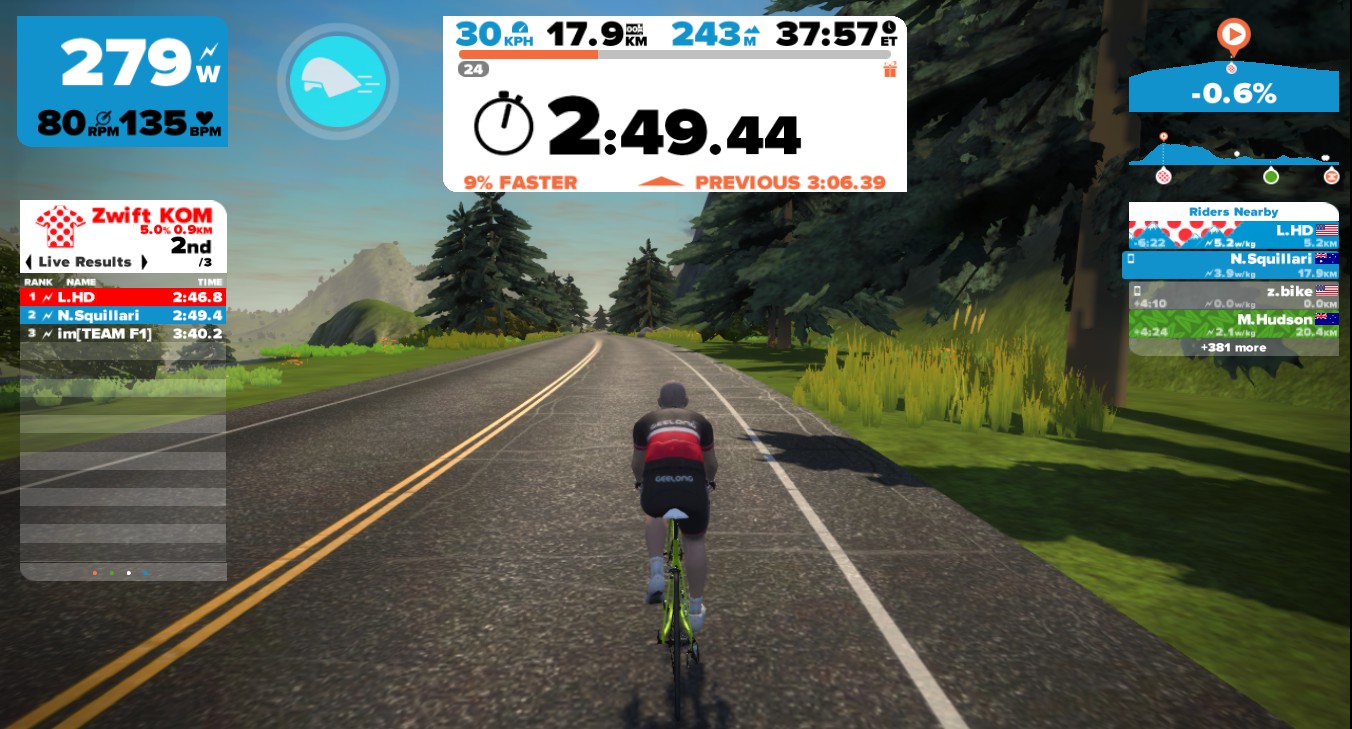 Hang around any TT with a climb and you’ll invariably hear someone say “Ah yeah, I’ll just jam it at 450W up those pinches and I’ll be right”, only to be a broken mess 40 minutes later, bemoaning the fact they went out “too hard”. Variable power on the climbs is important, but so too is consistency and knowing your limits.

Racing and the Real World

I’ve seen first-hand the benefits of a variable time-trial pacing strategy. My first run at the current Australian nationals time trial course in 2015 was a disaster. My plan was to ‘diesel’ it, with solid power delivery and minimal power spike in upper zone 5 (VO2max) range. I came home with a great-looking power file but a woeful result. Fast forward to this year and (without knowledge of these papers) I employed a much more variable pacing strategy.

Comparatively, my power was not much more than 12 months earlier, yet, as the studies suggest should be the case, I finished more than a minute faster over the 40.9km course.

What isn’t mentioned in the studies — as both describe controlled, windless environments — is wind. That in itself is a variable with the potential to ruin a result as surely as not accounting for a climb. Wind should be a key factor in any time trial pacing strategy.

Funnily this point was well made at a recent (extremely windy) Cycling Victoria time trial. It was a basic out-and-back course with a tailwind on the way out and a grovelling headwind on the way home. I held back on the throttle, knowing it would be nearly twice the out leg time to make it back to the finish.

To my amusement, later that evening I saw the Strava KOM for the out leg had been taken by a rider in the lower grades. He rode strongly on the way out but on the return leg he gave up more than a minute per kilometre to me, finishing more than ten minutes behind.

Get a good weather app, know the points of the compass and vary your pacing accordingly.

Studies have shown that in simulations of a flat, windless time trial, employing a constant application of power is the pacing strategy most likely to produce the fastest time. However once a time trial course incorporates gradient changes, variable power application — in sync with the increases in gradient — is a superior strategy to constant power application.

However, the key to this is consistency with the power increases, especially as the gradient increases. Wind, by extension, also needs to be considered in the same light as that of increases in gradient if an optimal time trial time is to be achieved.

This article by Nick Squillari, used with permission, originally appeared on cyclingtips.com.