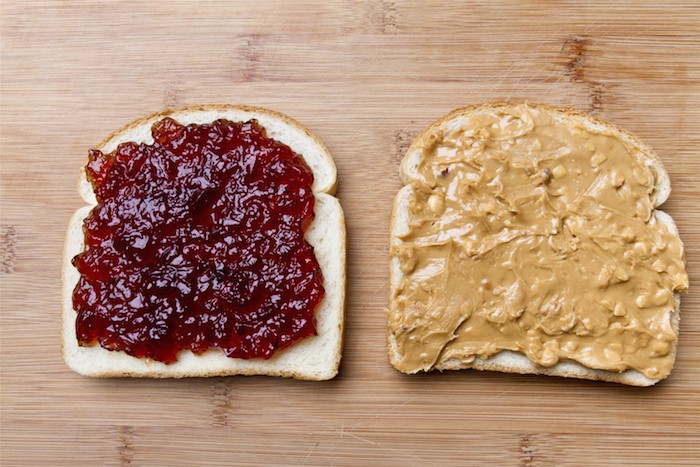 Spread the news--here are six mouthwatering twists on one of cycling's most traditional, revered, and effective energy foods: the mighty PB&J.

The PB&J is for those who ride with great intent but take in the scenery.

The kind of cyclist who packs one is the sort who, suffering a puncture, is as apt to fix the flat in two minutes as he is to sprawl in the grass for a spell and study the sky while munching on a triangular quarter of a sandwich thinking about nothing in particular. The PB&J is for those who close their eyes when they get a bite of sublimely proportioned ingredients, and who can lick their fingers worrying neither about embarrassment nor germs. On the bike, in a group, at a big ride, the PB&J eaters tend to possess the enthusiasm of the fool and the patience of the wise. Those who wave the sandwich in the air while telling a story at a rest stop don't worry over the existence of crust and maybe even relish it, as they do any of the more ragged edges of life or a ride. The PB&J is for those who don't mind needing a panini or gel packet or energy chew sometimes, but have a little laugh about it all the same. The PB&J is the essence of a billion century and charity rides, of card tables wobbling under mounded boxes of orange slices and coolers of water, of junior racers whose jersey pockets bulge in the mornings with the afternoon's cheap lunch made up and wrapped by mom. We love the PB&J--and its many variations--unreservedly, unreasonably, and unremittingly. If you haven't had one in a while, sink your teeth into some of our favorite fresh takes on a cycling classic.

Biju Thomas, coauthor of Feed Zone Portables, shares his method of jersey-pocket-ready sandwich packing. Perfect it and your lunch won't get soaked by sweat or rain, or go stale. And it will be easy to snag and unwrap even with gloved hands.

Slice off crusts from bread, then flatten each piece using a rolling pin or large soup can. Spread equal amounts of peanut butter and jam over each slice, leaving about a half-inch strip clear. Starting with the spread end, tightly roll up each piece of bread, then slice into thirds.

These sweet and creamy rolls easily nest into a jersey pocket. Chopsticks not required.

A winning mix of carbs, protein, and the saltiness of the prosciutto will recharge your muscles after a tough ride. It's also a great change-up for breakfast.

Microwave the chocolate chips in 15-second intervals, stirring in between, until melted. Spread the peanut butter on a slice of bread and top with the banana. Drizzle with melted chocolate, then sprinkle with coarse salt to taste, and top with remaining bread.

Satisfies a salty-sweet jones, plus dark chocolate is loaded with antioxidants that bolster muscle endurance.

In a bowl, combine the cream cheese, blueberries, and honey. Spread the mixture onto one half of the bagel and the peanut butter onto the other. Marry the halves to make a sandwich.

Peanut butter sandwich meets cheesecake in this delicious nosh that's best for postride indulgence. The cache of antioxidants in the blueberries speeds recovery after a hard ride.

Spread each slice of bread with equal amounts of peanut butter. Top one slice with pickles and drizzle with maple syrup. Top with the remaining slice of bread.

An unlikely pairing that shouldn't work, but does. You don't have to be pregnant to reap the rewards of the salty hydration and the vinegary snap that pickles bring to this sandwich.

Stir together the peanut butter, soy sauce, and chili sauce. In a bowl, combine the carrot, cabbage, mango, scallion, cilantro, and rice vinegar. Brush one slice of bread with the peanut sauce and add chicken; top the other with the vegetable mixture. Put them together.

Sweet and sour, crunchy and soft, this sandwich brings a touch of Thai to your lunch table. Mango adds a sweet kick and vitamin C, which can make breathing during rides easier.

5 ways to boost the power of your everyday PB&J

Take advantage of its extra recovery-boosting carbs after a long push in the saddle.

Fermentation by bacteria makes this ancient bread easier to digest.

Breads made with sprouted grains give you less of a blood-sugar spike for more even-keeled energy levels.

Spread nut butter, fruit preserves, and a dollop of ricotta cheese between toasted whole-grain waffles and call it breakfast.

WON'T IT MAKE ME FAT?

We can't promise that eating peanut butter will melt away your paunch, but even with all of the nut butter's fat calories, scientists at Purdue University found that people who ate about 3 tablespoons daily for a month did not pack on the pounds. The satiating protein and healthy fats in peanut butter can help put the brakes on overeating.