Don't let the cold keep you inside. Here's why it pays to brave the brrr. 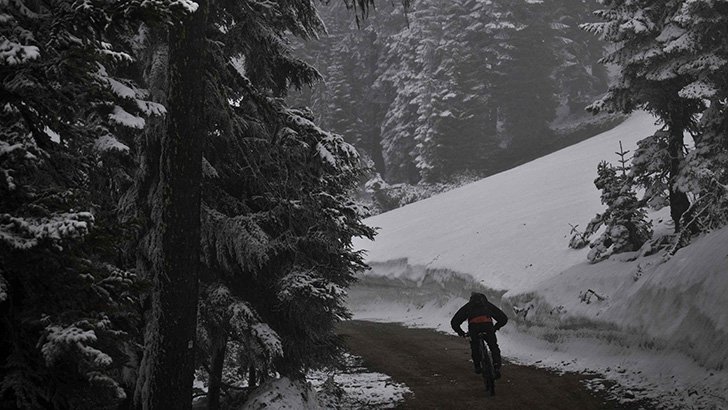 The transition into winter can be tough. As the soothing glow of autumn light, eye popping foliage, warm sunshine and cool air give way to dead leaves, persistently gray skies, and a steady descent into cold and dark, the urge to hibernate sets in, my appetite is out of whack, and I feel adrift and moody.

But there’s only one way I’ve found to make it through: stubbornly, one might argue stupidly, riding outside year-round. It’s not easy, I’ll admit, to rouse my motivation to bundle up and bear the cold outside when I’m already kind of cold inside. And yes, it would be easier to just hit the rollers or go to the gym. But there’s an array of benefits that can only be found in the fresh air. Here are just a few.

You'll burn more fat. There’s a growing and fascinating body of research on our fat’s color coding. Most of us know about white fat, the stuff that might sit in unwanted bulges under our skin. What we’re less aware of is our brown fat, which is packed with energy-producing furnaces known as mitochondria. Brown fat actually burns white fat. Lean people have more of it than those who are overweight. There is also beige fat, which is white fat that has been “browned” and now burns fat like the brown stuff. Two things can brown your fat: aerobic exercise and exposure to cold. The science is still young, but if fat biking in the freezing cold may activate my flab-frying cellular furnaces, I’m all for it.

You'll beat the blues. Seasonal affective disorder (SAD) is a form of depression. Exercise is a well-known tonic for mood disorders. Taking it outside is even better because you get the added bonus of daylight and fresh air. It’s no surprise that research shows that people who exercise outside in the winter enjoy better moods and a greater overall sense of well-being than those who coop up inside. I have never come inside from a winter ride, no matter how miserable the conditions, and not felt a million times better for having braved the elements.

You'll fend off colds and flu. Riding your bike boosts your immunity by circulating your immune cells so they can seek and destroy invading bacteria and viruses. Research shows that folks who get regular exercise have about 45 percent fewer sore throats and colds as their sofa-surfing peers. Getting out on your bike also frees you from the germy indoors where everyone is swapping winter sickness.

You'll discover new ways to work out. Winter forces me to get creative. There’s no way on Earth I’m going to do my usual road-riding loops when the snow is squalling out my window, but I will take my mountain bike—and this year my fat bike—out on some dirt roads, through corn fields, and around our city parks and cyclocross courses. I’ll also do a little half-and-half training where I set up my road bike on my rollers along with my iPod and Jambox before I head out the door. Then I do an hour or two (depending how wintry it is) outside before coming indoors, de-layering, and hopping on my rollers to finish whatever workout is on tap while listening to music or my favorite podcasts (Serial is the current obsession).

You'll bank a little badass. Anyone can ride when the flowers are in full bloom and it’s 70 degrees and sunny, but it takes grit to clip in when the rhododendron leaves are rolled in tight sleeves and it’s 16 degrees. That toughness doesn’t dissolve when your fingers and toes thaw. It dwells deep inside where you can dip into it when the time is right. I can’t tell you the number of times I draw from the bank of badass when I’m 40 miles into some beat down during the regular season. Remembering all the hard work I put in when the conditions were awful in the “off season” makes it easier to dig deep and persevere the rest of the year.