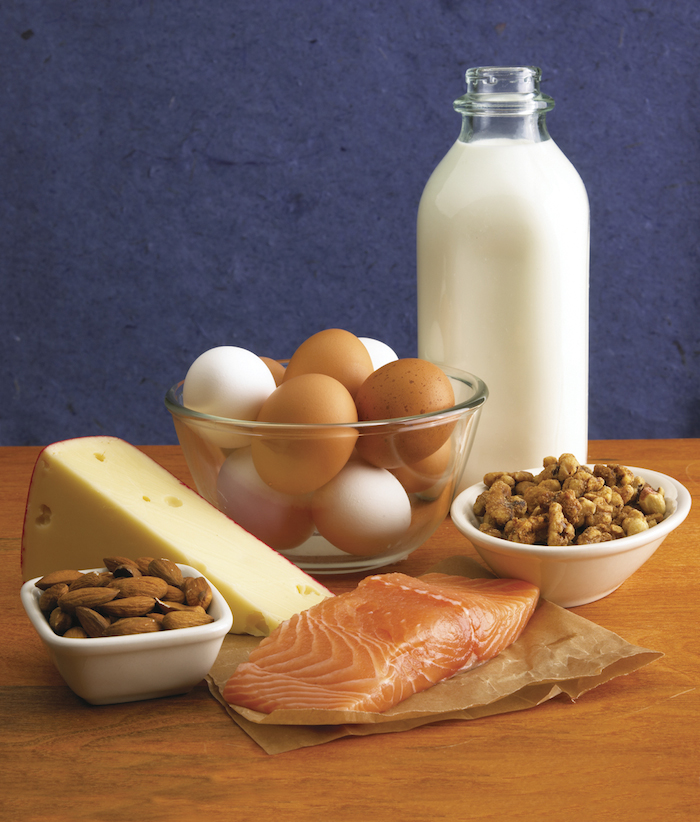 The key to weight loss is taking in fewer calories than you burn, but what you eat can give you a tremendous advantage. "We really are what we eat," says Samantha Heller, RD, senior clinical nutritionist at New York University Medical Center. "Food is nothing but a bunch of chemicals that unravels during digestion and becomes part of your body." The key is to eat foods that help your bodily systems run smoothly and optimally, so your energy and metabolism stay set to high. Here are seven to stock up on.

New research reveals that your body has a harder time burning fat without adequate levels of vitamin C--the star nutrient in OJ. Some experts estimate that up to one-third of Americans routinely run low on this important antioxidant. Why? Because we're still not eating enough fresh fruits and vegetables. Strawberries, kiwi, red bell peppers, tomatoes, citrus fruits and spinach are all excellent sources. Good to know: Fresh orange juice is brimming with C. (It delivers 80mg or more per cup, above the Daily Value of 60mg.) But vitamin C degrades with exposure to oxygen and light. Within a month every trace of C disappears from the juice, leaving you with nothing but a carton of orange-colored calories. "By the time you reach the expiration date, the C is lost," says vitamin C researcher Carol Johnston, PhD, RD, professor of nutrition at Arizona State University in Mesa. "Skip the gallon jug. Buy smaller containers instead and drink it within a week."

People who eat fish three or four times a week have higher levels of leptin, a hormone that is believed to control appetite and promote fat loss. One recent study showed that 73 dieters who were given leptin injections lost about four times as much weight (15 pounds versus 31/2), most of it from fat, during a six-month period as those who didn't receive leptin. Fish are also rich in omega-3 fatty acids, which help to regulate the body's blood-sugar levels, keeping hunger at bay. Most Americans get only about 15 percent of the recommended daily amount (650mg) of omega-3s. Good to know: Canned tuna contains fewer omega-3s than salmon, and it has recently come under fire for its high mercury content, which limits the amount of tuna you should eat. Buy canned salmon instead. Twelve ounces a week, or four 3-ounce cans, deliver all the omega-3s you need, plus it's low in calories (80 per can) and high in protein. Toss it in salads, mix it with pasta, or just serve it up with a little mayo in a salmon sub.

Lean meats, such as sirloin steak, as well as turkey, chicken, tuna, lentils and fortified cereals, are rich in iron, the mineral that's responsible for forming hemoglobin and carrying oxygen in your red blood cells. Without enough oxygen-carrying hemoglobin, your energy flags and your metabolism falls, says Heller. "Because they're so active, athletes such as cyclists may need about 30 percent more iron than the general population." Supplementing iron can be risky, so it's best to get it from food, she says. Good to know: Cook in cast iron. "The mineral leaches from the pot or pan into the food," says Heller. Acidic foods work best. One study showed that the iron content of three ounces of spaghetti sauce skyrocketed from 0.6mg to 5.7mg of iron after being cooked in a cast iron pot.

If you want to burn fat, nothing beats breakfast. The morning meal fires up your metabolism and increases your energy to tackle the day--and hopefully the ride--ahead. Eat eggs. Research shows that egg eaters consume fewer calories than non-egg eaters in the hours following breakfast. Good to know: Almost 80 percent of people who lose and keep off large amounts of weight eat breakfast daily, according to the National Weight Control Registry.

There's a reason every weight-loss plan recommends guzzling plenty of water. It helps keep off the pounds. When German researchers gave 14 men and women two cups of water, they found that the subjects' metabolism began to rise within 10 minutes of their final sip. After 40 minutes, their average calorie-burning rate was 30 percent higher and stayed elevated for more than an hour. What's more, water quenches your thirst and helps prevent dehydration, which can slow your metabolism. Good to know: Part of the increased calorie burn occurs as your body warms the liquid to your body temperature, so if you're aiming for max burn, dump ice cubes into a 16-ounce water bottle and fill it to the brim with water.

Sure, milk delivers bone-building calcium, and some studies suggest that calcium promotes fat burning, but that's not the whole story, or perhaps even the most important part. Milk is also an important source of vitamin D, otherwise known as the sunshine vitamin. Researchers are now discovering that vitamin D is an important player in metabolism, as well as bone development. The problem is that up to 70 percent of us routinely get less than we need. If you live in the northern states (any above the line from New York City to Northern California), the sun is strong enough for your body to make the vitamin only from May to September. What's more, sunblock with an SPF higher than 8 will block the UV rays necessary to make vitamin D. Good to know: Three cups of milk a day deliver your daily dose of calcium and about 75 percent of your vitamin D needs (400 IU a day). For the rest, hang out in the sunshine for about five minutes a day to get some light on your hands, face and arms. Other good food sources include eggs, and fish such as salmon, sardines and herring.