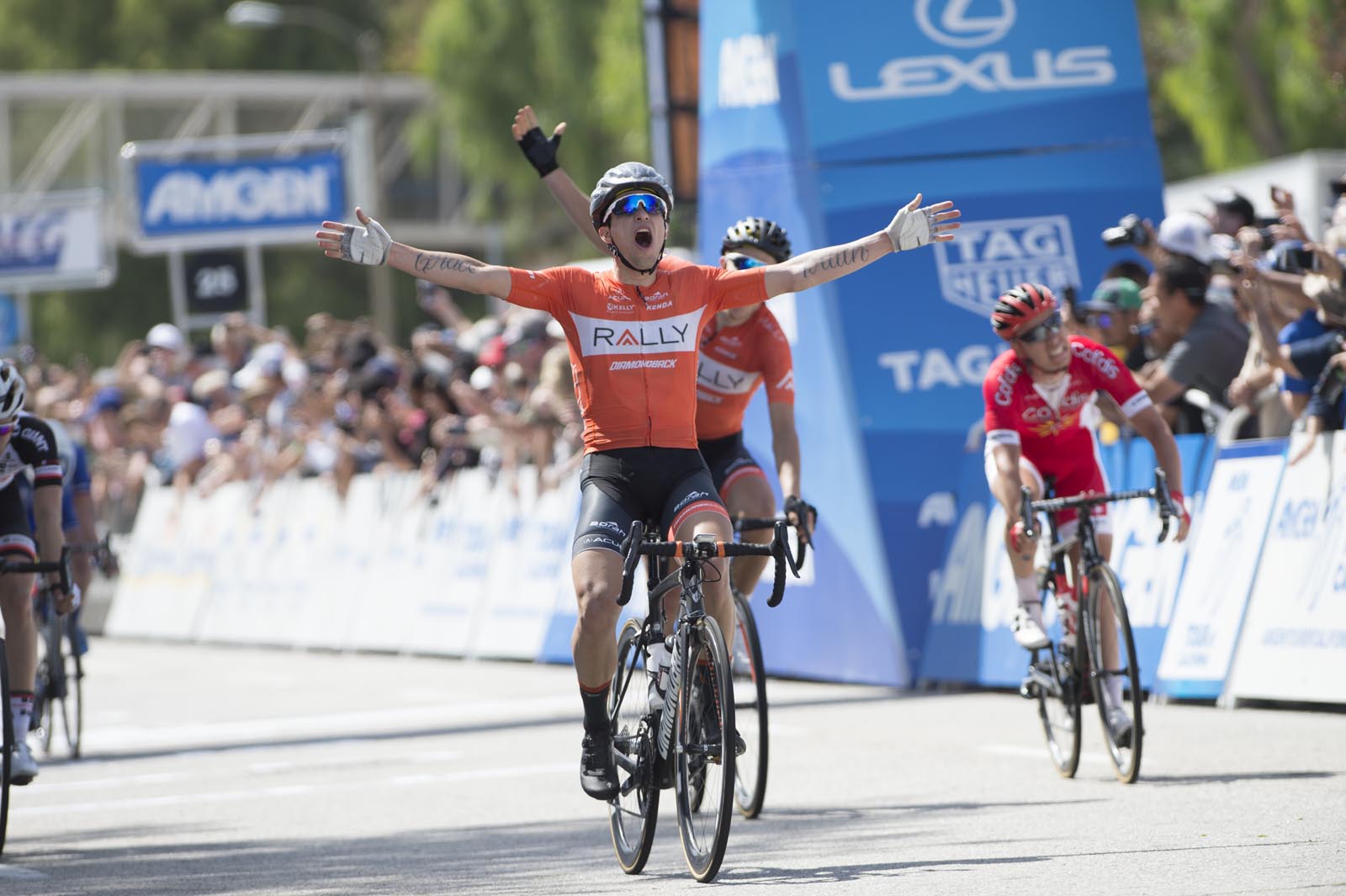 Evan Huffman powered into the history books with a stunning turn of speed in the closing meters of stage four at the Amgen Tour of California. Huffman won from a five-man breakaway that included teammate Rob Britton, who crossed the line in second, to give Rally Cycling a 1-2 finish in its first-ever WorldTour event. Huffman’s win is also the first victory ever by a Continental rider at the top-tier level of the sport. Huffman’s aggressive riding and bold move in the closing meters also earned him the Most Courageous Rider jersey and helped Rally Cycling to the top of the day’s Team Classification standings.

"I can't believe that we did it, I don’t think it has sunk in yet," said Huffman. "It's surreal and amazing! The team suffered some setbacks in stage two, so we needed to come out and race our bikes hard. The initial plan was to try to get the King of the Mountains points, but Gavin (Mannion) was picking up the points, so we scrapped that and tried to go for the stage win. In the finale, I knew the peloton was closing in, but that the line was coming faster. I know that I am pretty fast after a long hard day and was hoping the other guys were more tired than I was. I gave it everything I had, and to have Rob finish second adds to the meaning of this win. He is an unbelievable teammate." 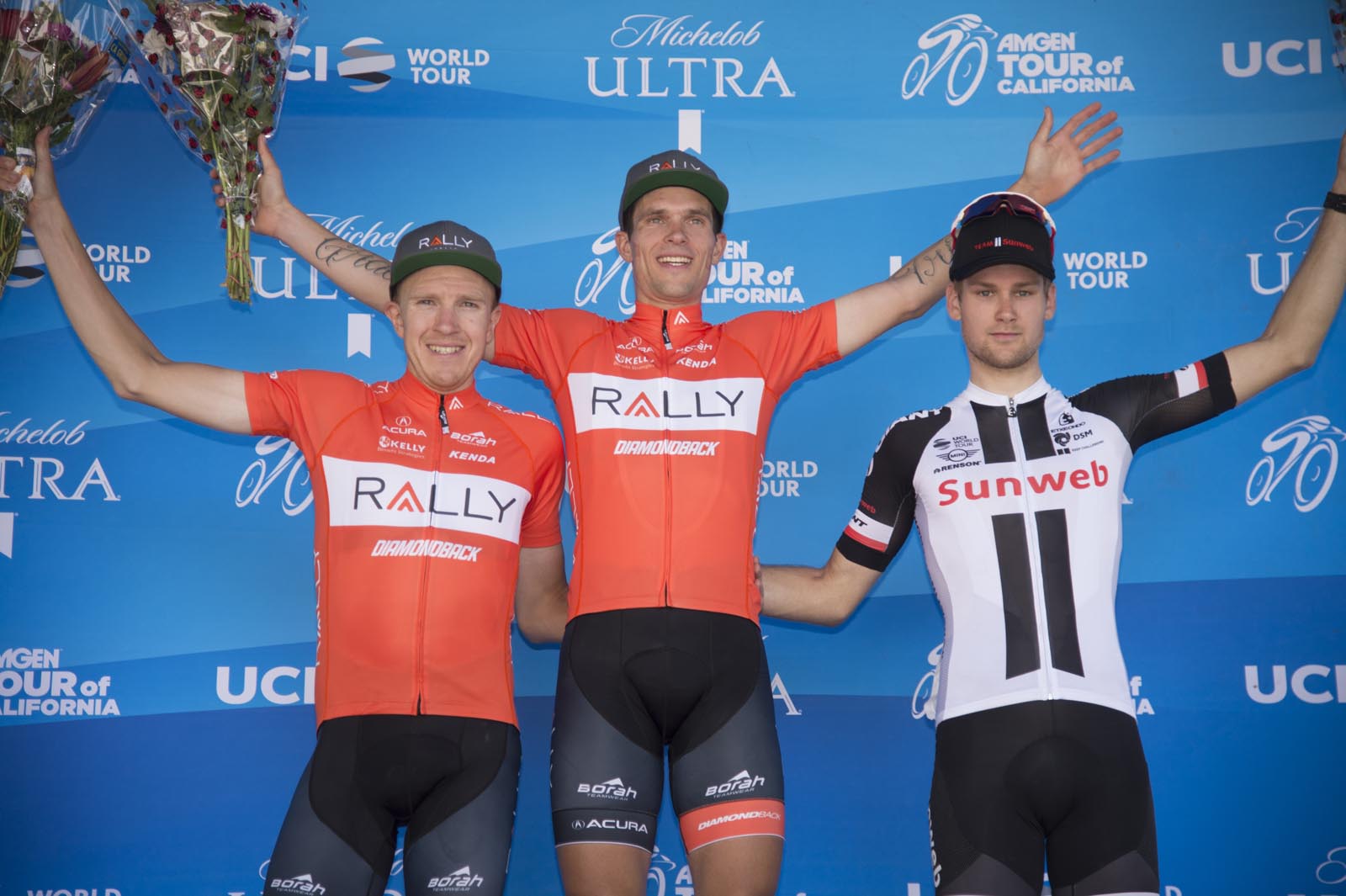 The foundation for Huffman’s victory was laid early in the day when after only 2km of racing, he, along with Britton, Lennard Hofstede (Sunweb), Mathias Le Turnier (Cofidis), Gavin Mannion (UnitedHealthcare) and Martin Elmiger (BMC) rode clear. Elmiger was eventually distanced over the final categorized climb, leaving five out front. At the halfway point, the five riders held a nine-minute lead, but pressure from the peloton increased after the final climb, and the gap began to fall. On the long run into Santa Clarita, it was touch and go whether the breakaway would survive as Quick-Step and Sky drove the pace in the hopes of delivering their sprinters to the line. With only three kilometers left, the peloton was still a minute back, and the victory would be fought out between the breakaway riders. As the line approached, Huffman powered clear with Hofstede giving chase. The Dutch rider failed to gain ground on Huffman, and seizing the opportunity, Britton came past to give Rally Cycling the first two spots on the podium.

“The plan for the day was just to get as many guys in the break as we could,” said Britton. "Evan and I forced it at the start of the stage, and we were able to establish a gap with a strong group of four other riders. In the finale, we knew we couldn’t mess it up. We have been racing together for three years, and I know how Evan races and vice versa, so we had an advantage. Evan pinned it with 500 meters to go, and I sat on Hofstede. He started to fade, and I was able to come around in the closing meters.” 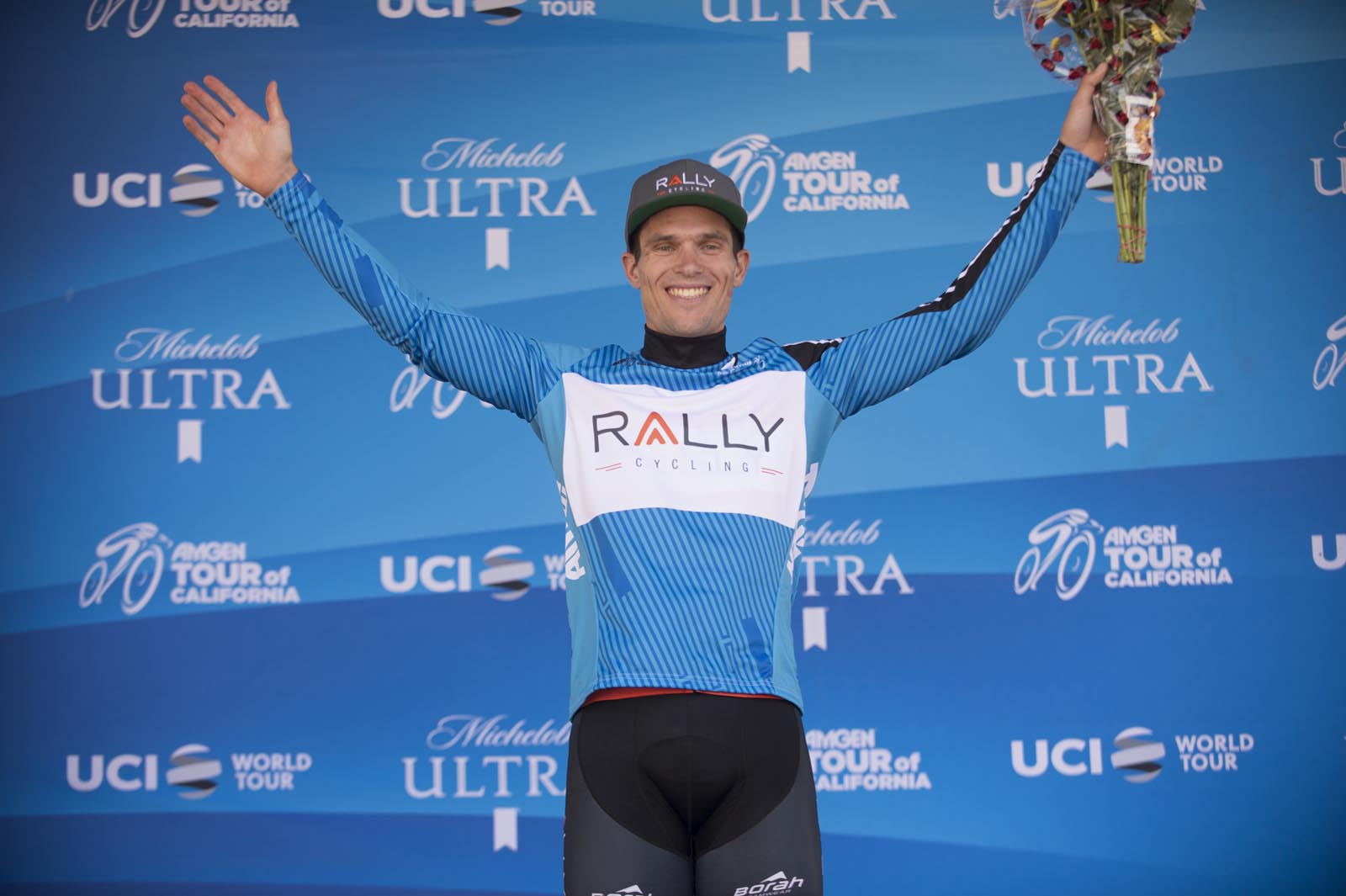 Today's results highlight the strength and character of the team that until today had experienced a rollercoaster of fortunes at the Tour of California. The team started off well with a strong showing in the final kilometers of stage one, putting sprinter Eric Young in the mix against the fastest riders in the world. In stage two, crashes and mechanicals dashed the team’s overall general classification ambitions and forced Young to be eliminated. The team’s ‘never say die mentality’ was on display in stage three as Danny Pate spent the day in the breakaway before Matteo Dal-Cin and Adam de Vos attempted to set up Colin Joyce for a run at the finish. Despite not landing on the podium, the team showed the resilience that led to today’s victory.

“Today was great, you really can’t ask for a better result than to finish first and second in a WorldTour event,” said Performance Manager Jonas Carney. "We have had success at the Amgen Tour of California in the past, but this year we knew it was going to be a hard event with WorldTour points on the line. Our riders put in all of the necessary work to prepare for a race of this caliber, and we came to race our bikes. Evan and Rob rode great today and showed the quality of the team. We had some setbacks in stage two, but the guys stayed focused and today was the fruit of that labor.” 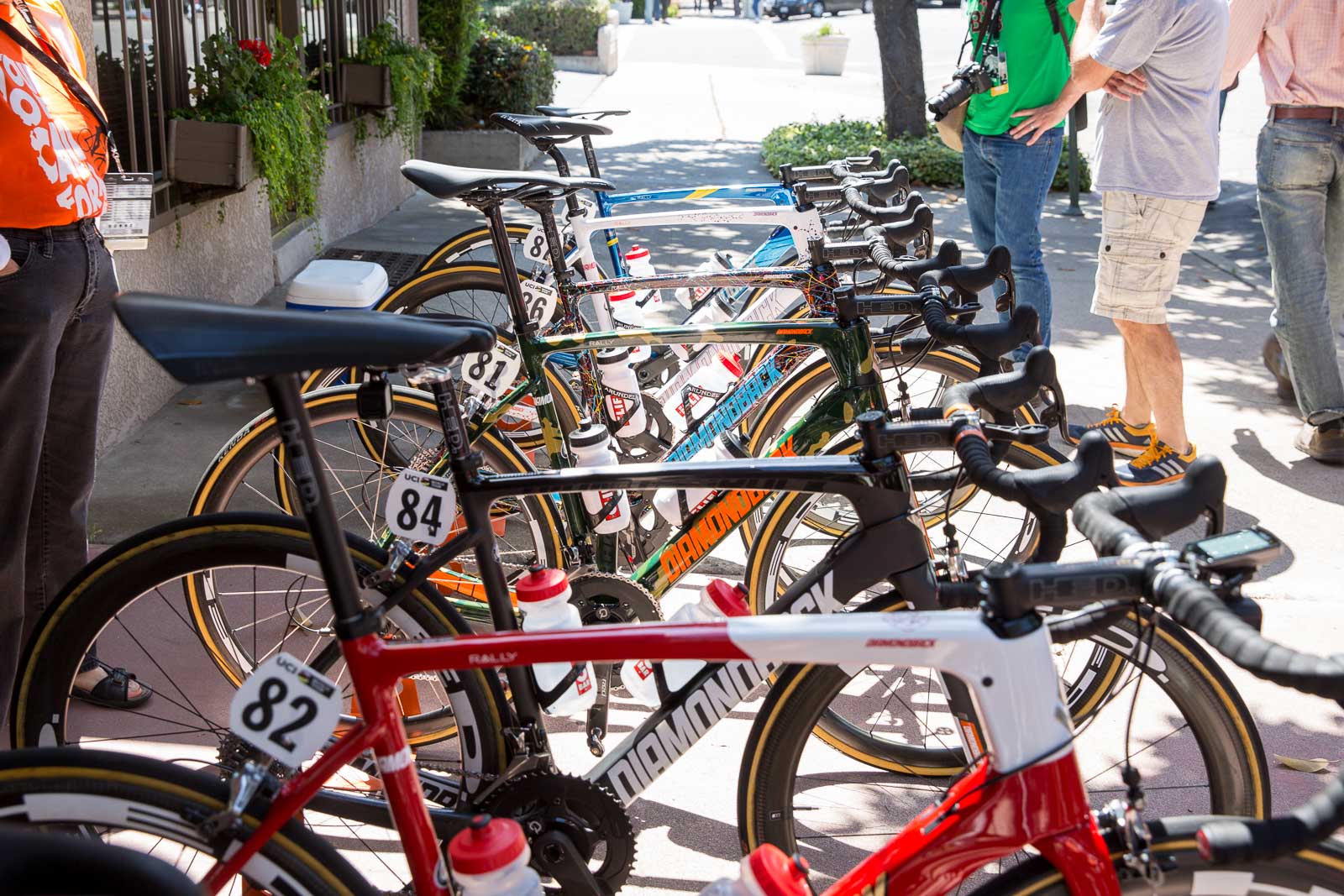 Riding To Make A Difference

Rally Cycling is racing the 2017 edition of the Amgen Tour of California on one-of-a-kind bikes each inspired by the imagination of a UnitedHealthcare Children’s Foundation (UHCCF) grant recipient. The bikes will be available for bidding online May 9 – 20, with 100-percent of the proceeds going to benefit the UHCCF. The UHCCF provides grants to families who need financial assistance to help pay for their children’s health care treatments, services, or equipment not covered, or not fully covered, by their commercial health insurance plans. Bid Today.