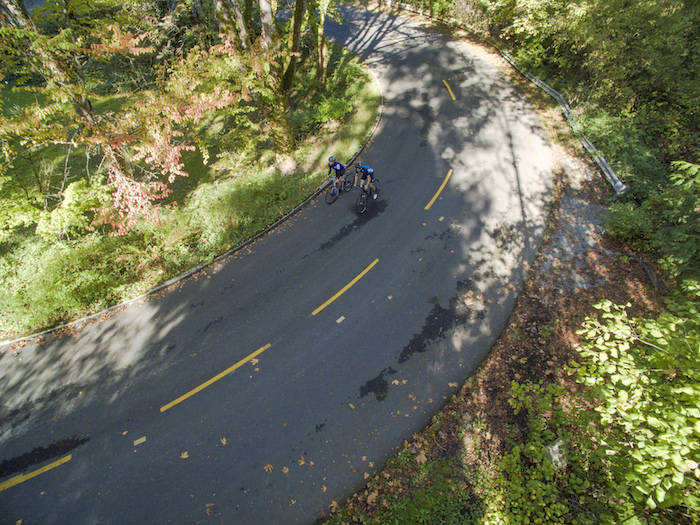 Climbing. Some love it, some hate it. More often than not a rider’s attitude towards climbing correlates with their body weight. The bottom line is that climbing is generally dictated by watts per kilo. Simply put: to climb faster, you need to put out more power, or weigh less. Or both.

There are a myriad of strategies that can be enacted with coaches, physiologists and nutritionists until you’re light and strong enough to leave all your mates behind. But bike races are not raced in a lab.

It’s a curious observation that those who test well in the lab often get smashed by their less-impressive counterparts in real-life racing. Sometimes it’s attitude, sometimes its technique, sometimes it’s pacing. But whatever is letting you down, here are a few tips to help you improve.

START AT THE FRONT

This is the number-one, absolute non-negotiable rule of climbing. Start. At. The. Front!

At the Tour of Hainan in 2009, where Pat Jonker was director sportif for Savings and Loans (a now defunct Australian continental team), he spoke to the team about an important climb midway through the race. At this particular race in China the climbs were on smooth, fast roads and the peloton would be motoring up a 6% gradient at 30km/h. If you started at the back it was dead-set impossible to move up. My job was to stay near Jai Crawford and make sure he was covered for any food, drink, mechanicals or unexpected attacks.

Pat just said: “You need to be at the front at the bottom of the climb. That’s your job.” Conversation over.

So I was. And so you should be too.

Australian-based fans who have raced the Tour of Bright will know only too well the agony of coming to the bottom of Mt. Hotham way down the back of the peloton (for those playing oversees, Mt. Hotham is an arduous, 30km climb of varying gradients, the bottom 1-2km of which is very steep).

ONLY DO SE TRAINING IF IT’S RELEVANT

Debate around strength endurance (SE) training is always controversial. SE means different things to different people, but a simple summary equates to a rider jamming it in a big gear, riding at a lowish cadence of anywhere from 40-70 rpm, on a trainer, up a hill, or into a headwind.

The bottom line is, there is a lot of anecdotal evidence, and a lot of riders espouse the benefits, but there really isn’t a great deal of science pointing towards its benefits.

Training should always be specific to the goals of any race. So if you have a climbing race coming up with some serious low-cadence climbing on the cards, sure, throw in some SE. Otherwise, maybe it’s best to focus training on shifting that watts per kilo equation in the direction you want.

If you’re like me you probably used to get a little starry-eyed watching Vino go berserk at the bottom of a 30km climb. But we all know that the ability to go into the red and recover rapidly, multiple times, is greatly enhanced with a bit of systematic doping. So perhaps, if you want to maximize your chances of surviving the climb naturally, try to pace yourself, and be patient.

Obviously, you can throw that comment away if you see your main rival is suffering and you’re only one kilometre into the climb. But if it’s still gruppo compatto and no-one looks to be hurting, taking the patient approach generally yields better results in the long run. Save the heroics for closer to the top.

IN OR OUT OF THE SADDLE IS FINE

Generally speaking, riders will gravitate towards whichever style they prefer. Some guys will climb the entire way out of the saddle, others will be seated the whole trip.

On the whole, climbing out of the saddle uses more energy and it’s better to sit as much as you can. But anyone who has climbed Mt. Baw Baw, Mt. Fuji, the Angliru or Monte Zoncolan can tell you that, sometimes, it’s out of the saddle or nothing. In terms of specificity of training, it’s best to focus on out-of-the-saddle climbing if that’s where your race is going to be decided.

The best tip is to switch your position every time the pace eases so you give whichever muscles are doing the majority of the work some reprieve.

GO INTO THE CLIMB WELL-FED

It’s best to do the bulk of your eating before a climb starts. Plan it so you are well-fed, and only have a light snack or two on the actual climb. The energy from sports drinks can keep you ticking away if you’re well-fueled beforehand. Don’t forget: every time you jump in or out of the saddle when the pace lulls just a little, grab a drink too.

Even if you don’t think you need food, have a couple of emergency gels handy just in case. We don’t all have Richie Porte to go back and get a gel for us when we start hunger-flatting in the last few kilometres of a mountain-top finish.

PLAY TO YOUR STRENGTHS

So you’re over halfway up the climb. There have been a few attacks that you’ve followed and now it’s only the serious players left. You’re on the front, and your best mate (also your biggest rival) is on your wheel and you want to crush him/her into oblivion. So do you attack? Or do you slowly turn the screws?

Generally, if you weigh less than 65kg and can accelerate like Contador, then you should. Put them out of their agony with one brutal attack. But if you’re a heavier, stronger rider, be wary: one big attack might distance your rival but if it puts you so far into the red that you blow up yourself, it’s probably not a great idea.

The smarter tactic is to up the pain by a ratchet every 500 metres or so. Repeatedly kick the pace up out of corners and into steep inclines, just that little bit each time to make those on your wheel really hate you. What you want to do is keep opening little gaps to the point that your opponent cracks and decides, one last time, that they just can’t close the gap.

LISTEN TO THEIR BREATHING

At a Victorian Institute of Sport training camp in Bright many moons ago, I was climbing up one of the large bergs in the region and suffering like a dog on the wheel of Will Walker. He put me through the above scenario of upping the pace with repeated mini-accelerations until I could go no more. Like a cat with a mouse he was toying with me, until I eventually blew up, spectacularly.

He later told me he was just “listening to my breathing” and that he waited until he heard me get to what sounded like VO2 max before he put the final nail in the coffin. I stayed in that coffin for the rest of the day.

BUT KNOW YOUR OPPONENT!

I’ve made the grave mistake, however, of thinking I had an opponent on the ropes, only to discover they had some form of asthma. So you think “Yeah, he/she is literally dying”, when in reality, that’s what they always sound like. I went to put in my final, big surge and this guy came straight round me in the last kilometer of the climb and left me for dead! Always know your opponent.

So there you go, get fit, practice these tips and climb like kings. Good luck!

This article by Jono Lovelock originally appeared on cyclingtips.com.